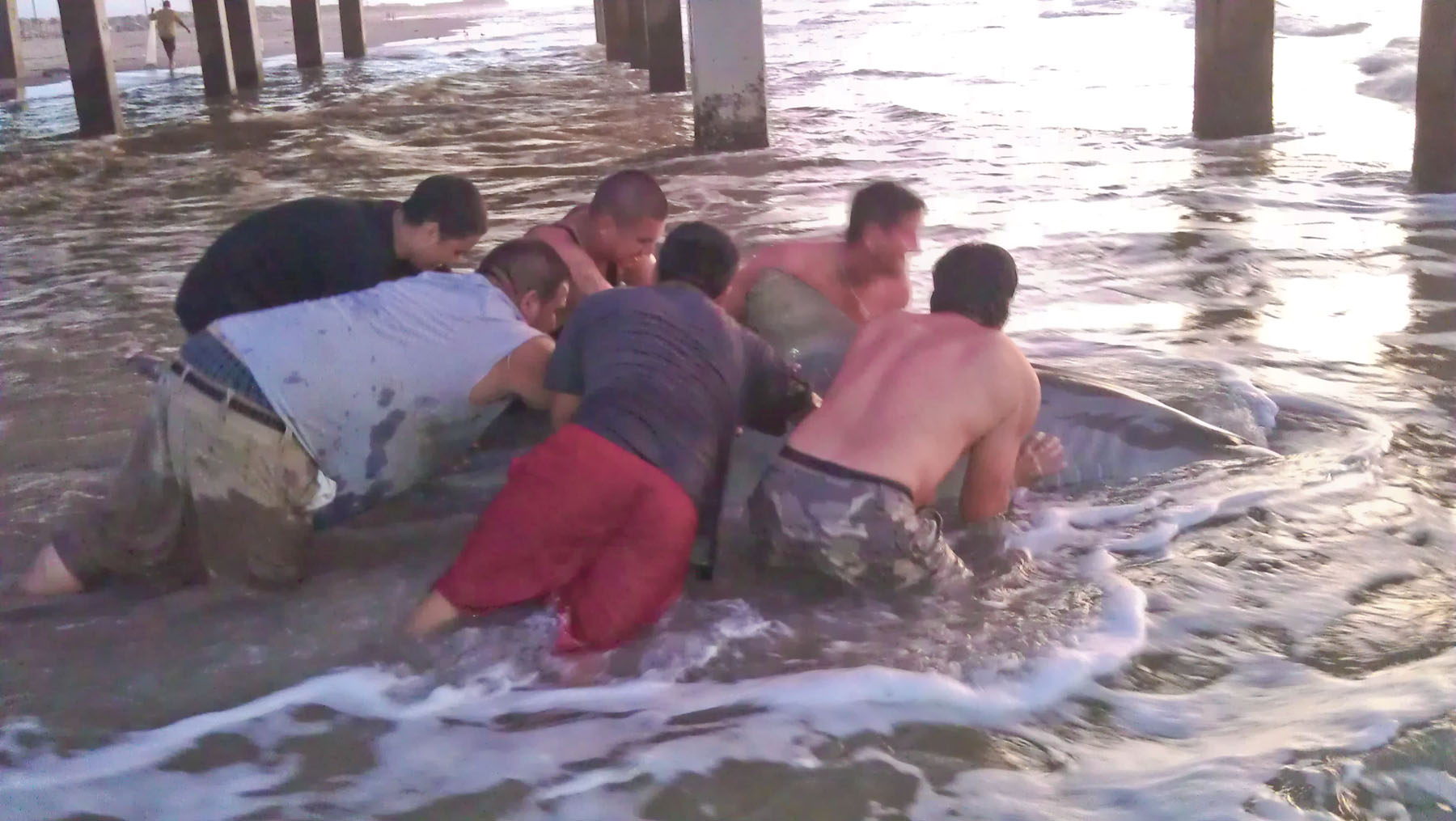 Albert Zertuche and his pals struggling to revive the 12’-6” tiger.

Let's start with the best news and work from there. Last month, we told you about the 12'-6" tiger shark that Alberto Zertuche caught and released from Bob Hall Pier back in August. Alberto called me a few days ago and notified me that the International Land-Based Shark Fishing Association had certified his catch as their All-Tackle Shark Release World Record. Talk about some bragging rights! I figure that will fill the bill. I told him how very proud I was of his accomplishment and that it would do a whole lot towards influencing others to release big sharks.

I haven't the words to tell you how very proud it made me for him to say that my efforts had played a small role in his decision to release that magnificent fish that is very probably close to one hundred years old. That is worth more to me than all the awards anyone could possibly bestow.

I don't have to tell anyone what this summer has been like for Texas and all its inhabitants. The worst drought on record combined with the hottest summer on record across much of the U.S.A. and Texas has taken a terrible toll. Wildfires have devastated thousands of acres and homes and my genuine heartfelt prayers go out to all those affected. Large areas of grass and pasture lands are without water, and livestock and wildlife are suffering and struggling for their very survival. It's no different on Padre Island. Badgers and raccoons have been found dead on the beach recently. They weren't run over; they were simply unable to dig down to fresh water. Deer and coyotes are seen in the middle of most days searching for food and water. When the Padre Island National Seashore was formed, there were existing wells the ranchers had dug that provided water to wildlife as well as the ranchers cattle. They were filled in by NPS personnel for fear of someone falling in a hole, getting injured, and suing them. For over 20 years I've pleaded the case for restoring them to NPS personnel so that wildlife could once again use them, but my efforts have been to no avail. What I've never understood is that Big Bend and other National Parks utilize pre-existing man-made water sources, and I can't understand why PINS is treated differently than the other parks within the NPS.

My Christmas has always been the last ten days of September as this time frame is typically the best overall fishing of the entire year and specifically it is when the peak of the annual tarpon migration occurs along our shoreline. We've lost the last three years to Hurricane Ike and red tides. This year were losing it to record breaking high temperatures and no substantial cold fronts having arrived yet. One mild cold front resulted in several days of quality fishing but it was short-lived and we are easily running a month late in our annual fish migration patterns. I'm really concerned about the fact that we have active red tides both to our north and south right now and if this heat continues much longer, it is bound to show up here sooner or later. Yesterday was our hottest day of the year; an all time record for the date at 103 degrees. Our normal high on this date is 88 degrees. If you don't think that impacts everything outdoors, you are mistaken. Well still have some great fishing before winter sets in but with the lateness of its beginning it will be of shorter duration than usual and pass all too quickly. When we start getting some REAL cold fronts, take time out to get out there and enjoy it. Watch your forecasted tide levels ever so closely and target the second day behind the passing of a cold front when planning your trips. Beware of high velocity northeast winds as they will push the water to the dunes and could very well strand you down island. I'll tell you one lesson learned the hard way in September. When you have water temperatures that you know are too high and light winds, avoid fishing days where the tide falls all day long. You'll accomplish more cutting the lawn.

Although well-known, I tend to be a very private person and a recluse. As such it's a bit out of character for me to share the following story with you, but I think it's too important not to. When I got out of the military in 1976, a Veterans Administration representative frankly told me I had some very real mental issues and other problems from serving two voluntary tours as a patrol leader in the jungles of South Vietnam. He suggested I file for disability with the V.A. and felt certain I'd get it. I declined and instead lived :down island" for 1.5 years. I could NOT live in an urban setting. All these years, I have never considered myself a part of society and have lived outdoors and had as little to do with my fellow man as possible and still survive.

As the years go on, I once again find it increasingly difficult to live in town and this time I did go to the V.A. for help. Twenty-one months later, they have disabled me 70% and say I'll be 100% disabled soon. They medicate the symptoms but the issues remain and always will. Two weeks ago both the V. A. shrink and my V. A. medical doctor during separate appointments told me that very frankly they had no idea whatsoever how I had survived this long and how I was still alive due to the amount of Agent Orange I had direct skin contact with and the amount of mental stress I had undergone.

I quietly looked each of them in the eye and replied, Well, I can tell you why. I'm alive because of Padre Island. It is the only peace I've ever known, it's my church and it is the only place on planet Earth where I feel 100% at home.

Had I not had PINS to go to as a refuge I would have been dead long ago. No sad poor me story here. I have lived a wondrous life I would change with no one but the fact is I know there are lots of others like me. Maybe not to the degree in my case but people who depend on places like our National Parks and PINS to escape from the stresses of everyday life and would be lost without access to them. I have run into such people constantly over the years. How many fish they catch doesn't even concern them. They just NEED to get away and go to PINS. The enabling legislation, Public Law 87-712, states that the purpose of PINS is "To save and preserve, for purposes of public recreation, benefit, and inspiration, a portion of the diminishing shoreline of the U.S. that remains undeveloped." The Feds say it is a privilege to drive on the beach; not a right. But from the wording of that law it sure sounds like a right to me. A right worth standing up for and defending. Hang in there; better days are right around the corner.