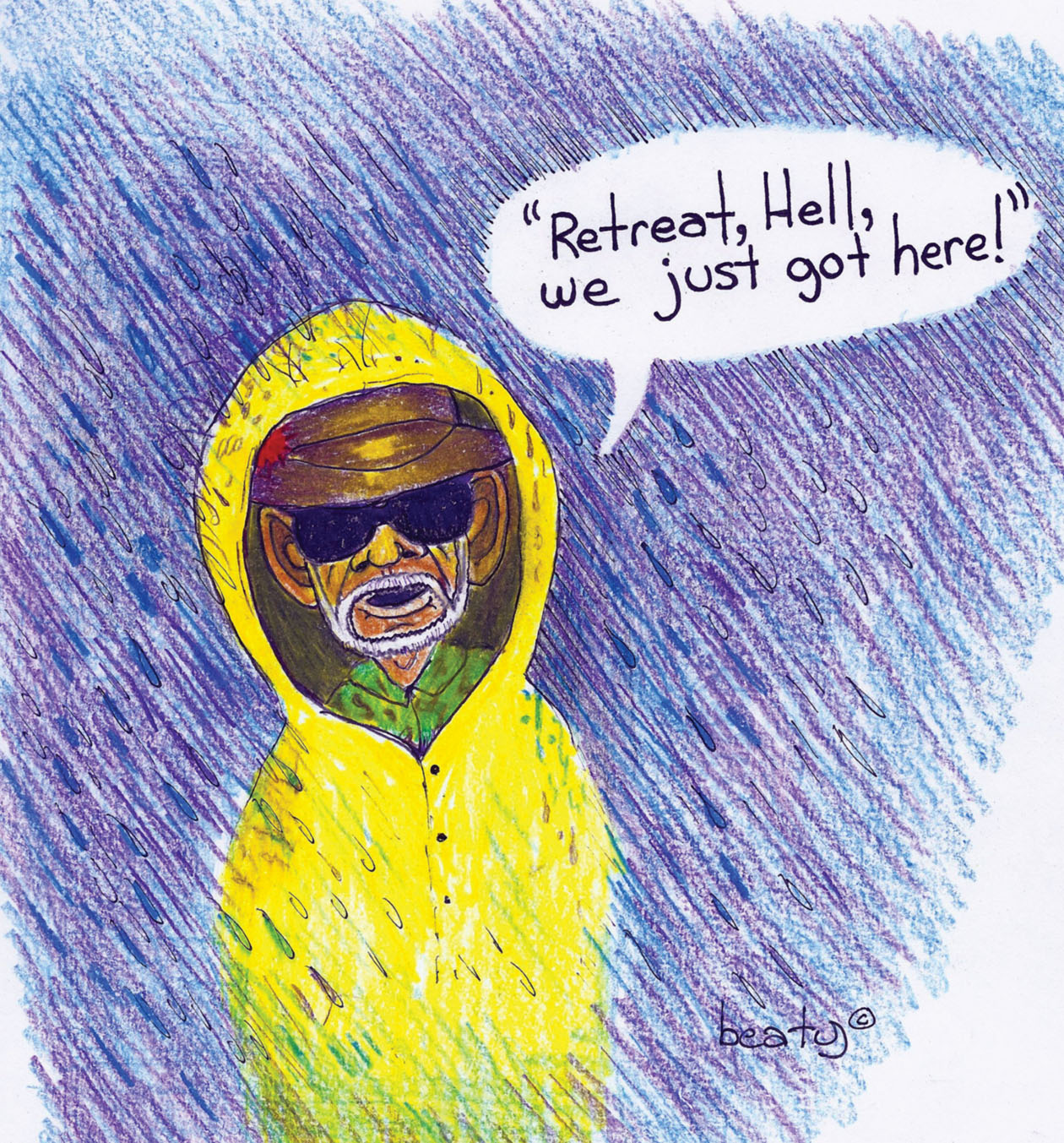 A caricature of me by Ben Beaty at the Beach Cleanup.

I rarely sleep at night anymore so some weeks back I pretty much quit trying. For the most part I sit quietly and think and relive old memories or study various subjects concerning the natural world in my small library of reference books and most nights at some point I just sit and listen to the howling of the wind.

I am very grateful that I no longer have to pick up a charter at 0630 and try to make the trip a success in high winds, heavy seas, three feet of sargassum stacked from one end of the beach to the other, and the absolutely miserable spring driving conditions. There has been little in the way of quality fishing conditions in the surf so far this year and I'd have been able to complete very few charters - and with extremely high overhead and mechanical issues that come with such conditions we'd be absolutely dead broke right now if the V. A. had not come through with the disability rating.

Being a realist, I realize that if my wife had not worked like a dog all these years to help support us, at times our only steady income during extended red tide events, etc., I would never have been able to live the wondrous life I have experienced as the guide on PINS.

Yes, it was brutal at times, often dangerous and required constantly pushing the limits of body and mind, but it was a wondrous adventure and was made to order for me. How blessed I have been that my wife cared enough not only to tolerate it but to support it, me and my efforts. Can you imagine living with the likes of me for thirty-one years? Why I wouldn't put up with me for more than a few hours, much less thirty-one years. If living all these years with PTSD has been tough for me just imagine what it must have been like for her living with a certified nutcase all these years. She often tells me Vietnam veterans should be like cigarette packs and come with warning labels that say, "Beware, living with Vietnam veterans could be hazardous to your health."

Fishing guides tend to sit around calling each other captain and talking about all their personal successes, but most fail to mention their wife is working as a maid at a local motel or condo to help make ends meet, even though this is a common situation and necessary income supplement in the guide business.

And I know my wife has spent many a day in quiet desperation and fear worrying about my safety as I battle my way in a kayak through a surf that I know is too rough and roll around on the backs of 350 pound bull sharks removing hooks from their mouths so I can tag and release them.

Getting up with me at 0500, packing my lunch and getting my coffee ready, as I load all the equipment into the truck for the day's charter. Then working a full day at her own job and coming home to wait and worry till I return; at which time she cleans the truck while I clean up all the gear and get it ready for tomorrow.

She then warms supper as I stagger to the shower so tired that I'm in a daze. I eat; too exhausted for small talk, and stumble off to fill out my log book and then fall into bed. Next day; same thing all over again. So much for the lifestyle of a legend and the poor woman who married him.

See the problem with being a legend is that it doesn't pay near as well as being rich and famous. I am very pleased with what few good deeds I may have done for conservation and for the overall good of Padre Island as well as whatever influence I may have had as a positive role model, but the harsh reality is that doing good deeds darn sure doesn't pay any bills. And while a high profile guide may bask in notoriety (whether he wants to or not) his wife most often lives an unacknowledged, anonymous life although he couldn't do the good things he does without her support. God knows you have very rarely heard it in all of these years but - Joy, I thank you from the bottom of my heart!

Had the strangest and most wonderful turn of events since writing my last article on the recent Big Shell Beach Cleanup which I titled - Retreat Hell, We Just Got Here. Incidentally I picked up that title from a line in a Sci-Fi movie currently showing on TV called "Battle Los Angeles."

All I knew of the history of this saying was what it said in the movie; that it had been first used by a USMC commander in the First World War. When I wrote my internet closure article on the cleanup for internet message boards I started getting responses to the post that enlightened me to more of the history of the saying. It took place in WWI at the Battle of Belleau Woods near the town of Lucy-le-Bocage in 1918. The statement was made by USMC Capt. Lloyd Williams when a French officer suggested retreating to Capt. Williams, who was later killed in the battle.

Upon reading this it really struck a chord with me and I was puzzled as to why. I was inexplicably drawn to look over my right shoulder at the wall behind my desk and instantly my focus was drawn to my papa's WW-1 helmet I've treasured all these years, and then I remembered that the only battle he ever specifically mentioned having participated in by name was the Battle of the Belleau Woods and that it had been a really tough one. Papa was a gunner on a water cooled machine gun in France in WW-1 and my heart stopped as I realized that 94 years ago he and Capt. Williams were eating the same French dirt and fighting in the same battle where Capt. Williams made this statement and later died - and when they did Papa was wearing this very same helmet that now hangs on the wall in my house. Now buddy, if that don't prickle the skin on the back of your neck there's something wrong with you. What an absolute hoot.

I don't think I know how to quit shark fishing. Its high dollar but I'll tell you a true story. Two years ago I ended up paying about $800 for an over-weight iron rack which ending up causing $2,000 worth of broken leaf springs over a period of only eight months. This one probably weighs in at less than 50 pounds, is functional to the max and sharp looking to boot. That's a better deal any day.

It looks as if PINS dodged the bullet on the wind farms for now but they are still planning on building them offshore of South Padre. I seriously doubt whether a bird knows if it got killed on North or South Padre.

Everyone remember Kemp's Ridley Sea Turtle nesting is now in full swing and the speed limits on PINS beaches is reduced to 15 mph. Look forward to seeing you down island. Tell your wife THANK YOU. My bet is she's earned it.