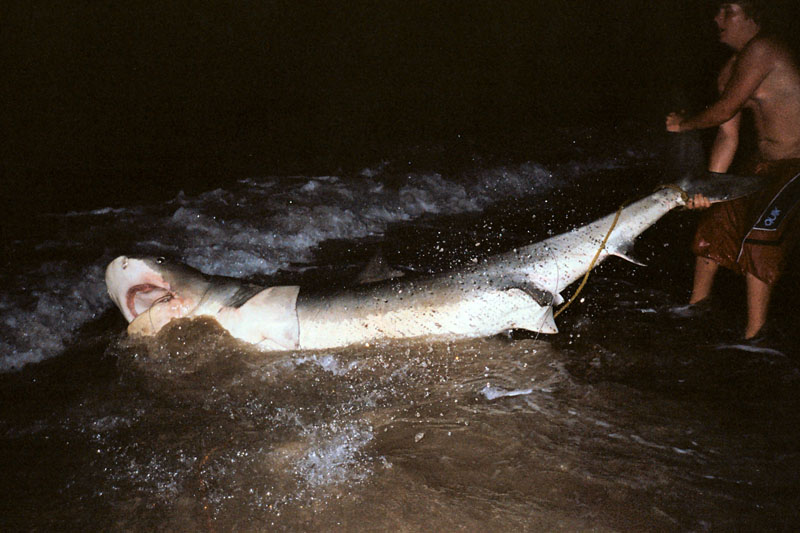 Chris and Brian Sessions landed this enormous female tiger shark from the PINS beach on August 05,2006. The giant fish measured a full 12-feet and likely weighed 750-800 or more pounds. By all information available, this may qualify as the largest fish ever released by beach fisherman anywhere in the world.

Chris Sessions has been shark fishing the beaches of PINS for 25 years and his son, Brian, has been sharing these adventures with his dad all of his life. It's hard for me to see the strong young man standing before me now-a-days and realize he was the little blonde-headed boy I used to see playing in the sand. Chris and Brian run baits out of a Zodiac inflatable with an outboard on it and when not shark fishing are often fishing the nearshore rocks and oilfield platforms off PINS for a variety of game fish.

On Saturday 05 Aug 06, Chris had a run on a 12/0 shark rig with a 50' leader utilizing half a jack crevalle for bait and a 20/0 circle and a 14/0 J hook. The bait was 500 yards offshore and the fish struck at midnight. After an epic battle leaving only 100 yards of line on the reel at one point, and 1-hour and 45-minutes later, they beached and released a very heavy-girthed female tiger shark that was 12-feet long weighing 750-800 or more pounds successfully. This is the largest fish landed from the beaches of PINS in several years, but more importantly, to my knowledge, this is the largest fish of any species ever released from the beach anywhere. The fish was badly tangled in the leader, and for two people to attempt to free and release it in darkness was a monumental and dangerous task.

The fish had rolled up in the entire leader and was badly tangled in it. Two long line hooks were visible from earlier encounters; one in its mouth and the other lodged near the anal fin. Fighting desperately against time, the two decided not to beach the shark entirely, but to leave it instead in the shallows as it would have proven impossible for them alone to pull the shark back offshore for releasing. Chris grabbed his bolt cutters and began to cut the cable repeatedly until the tiger was free of it and released her. When I asked if he was able to get the hooks out he laughed and said, "Billy, I was never ever able to see the hooks. We were so busy we just got the cable off her and got her back out into deeper water and she swam strongly away."

See, in my experience in the Natural World; that is the way things really happen. There is rarely a perfect scenario for catch and release of an apex predator. You make a decision, commit to that decision, act quickly and as effectively as possible, and get it done. By the nature of their very lives these creatures encounter hardships and injuries regularly and to assume that having to carry around a couple of hooks until they rust out will kill them and then use that as excuse to kill the fish is unacceptable and needless. Actually, I have always felt it was more of an excuse for cutting out a set of trophy jaws to hang on the wall than any concern for the creature. To quote my dear friend, Dr. David McKee, "well you never know for sure a fish lives when you turn it loose but we all know that all the ones you put in the ice chest died!"

My most sincere congratulations to Chris and Brian Sessions on an awesome job done in a very commendable fashion. I know Chris has been after that fish for 25 years and living out a goal like that is hard to beat. My hat's off to both of you.

Third Annual Sharkathon Tournament will take place on PINS beaches on 8-9-10 September. This is a catch, photo and release tournament and no fish killed can be counted for awards. It is a first of a kind event in this area and was the dream of three conservation-minded shark fishers; Curtis Mai, Russell Weir and Trevor Lovett. This tourney has become a reality due to lots of hard work and lots of help from like-minded friends and fellow anglers. I am not a fan of tournaments as I have always felt that they put unnecessary pressure on the natural resources, but as it is obvious that tournaments are here to stay then certainly I can be supportive of tournaments that require catch and release such as this one. I don't give away fishing trips. I don't make enough money to do so, but in this one case I am making an exception and am giving away a day's light tackle fishing and instruction in reading the beach and tactics as a door prize. Guess it's called putting my money where my mouth is.

With all this hoopla and hurrah about living in this enlightened age and so much information at our fingertips, I cannot for the life of me understand the concept of continuing kill tournaments, no matter whether they are organized to support charitable groups or worthwhile causes. If they are so worthwhile, then it is also conspicuously worthwhile to take the time to figure out how to hold these same events and get the same benefits without over-stressing resources that in many cases are in decline in the first place. Latest information indicates that all apex marine predators are in sharp decline and in all cases the decline stems from over-fishing by humans. When we think about how important the well-being of fish populations are to us individually as lifelong fishers and consider how tremendously important fishing is to coastal economies, it is clear that promoting kill tournaments is very poor business for us all indeed.

By the time you read this I will have had cataract surgery on my left eye. I had it done to my right eye five years ago and the results were amazing. September is "Big Game Fishing Peak Season" on PINS and it is awful cool to know that I will be going into it with a freshly re-habbed eye this year. The really interesting thing about the whole deal though is that I still see everything I've ever seen using only one good eye. I get tickled when friends and customers are constantly amazed when I am pointing out things they didn't or can't see. Guess nothing beats experience and knowing what you are looking for as well as realizing what you are seeing.

It also makes me realize that time doesn't stand still for me anymore than it does for young Brian Sessions. Folks are always coming up to me and saying, "Billy it is so good to meet you. I have always intended to go fishing with you but have just never gotten around to it." I always laugh and say, "Well hurry up and go; I need the money and I ain't going to be around forever." Time passes and the things we always "wished" we would have taken the time to do will haunt us while the things we do take the time to do will be memories forever. Do yourself a favor and take some time for you and spend it in the Natural World. After all, life is and was intended to be a hoot!

Be Careful, Be Courteous, Be Kind -- Capt. Billy L. Sandifer