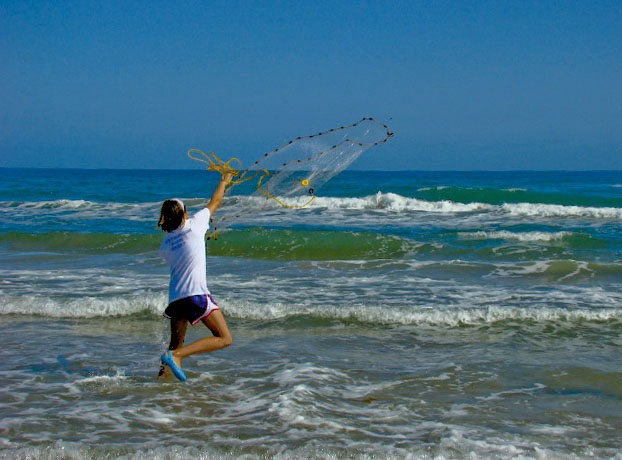 Brooke Vestal throwing cast net in surf.
When you mention jack crevalle to saltwater fishermen you can rest assured you will get an immediate reaction but till you do you can never be sure what that reaction will be. Seems like nowadays more folks love them than hate them and that is a change, for years ago the great majority hated them. That was due to the fact they fought so hard, tore up tackle and weren't considered edible. The attitude of my customers has changed over the years. They aren't grocery shopping; they want their string stretched and if jack crevalle aren't sportfish I can't imagine what is. I like that. Sight-casting one from the surf on a fly has became quite the feather in the cap of Texas fly fishermen.

Fishing the surf twelve months a year is interesting as techniques and species sought (available) change from month to month. The jack crevalle thin out by December and few will be seen after about the tenth of the month. Pompano, Spanish mackerel, Atlantic bluefish, sandbar sharks and other species will peak in numbers and then in March it will all change again in the never-ending cycle of life in the surf zone. I never have had many charters in the winter and spring and have always called it, "the time of the starving moon." But there was always a positive side to this time of year. One that I dearly loved for many years and I find it hard to let it go even though I might as well because I know it is gone. It was such a big part of my life and I loved it so.

For as far back as anyone alive can remember we have had the only winter surf fishing for trout in Texas on the PINS beaches. I can't tell you why; that's just the way it was. There was a very small group of anglers who knew the necessary techniques of catching these fish with any regularity. They all knew each other and when not helping each other they spent their time playing tricks on each other to throw everyone else off the fish. 51M MirrOlures were the lure of choice. The trout first showed in mid-October but December and January brought the peak numbers and best fishing. I've caught as many as one hundred sixty in two days by myself and the smallest would be three and one half pounds and the largest over nine pounds. Mr. Ralph Wade took me under his wing and showed me the ropes and it was through him that I became accepted into this small group I lovingly referred to as "the clan." They were furiously defensive of PINS and this wondrous fishery they had enjoyed for many years and I was surprised that they would include a fulltime fishing guide among their number. Then I it dawned on me they did so because Ralph vouched for me as being trustworthy; guide or not. I was extremely selective whom I brought on winter trout fishing trips and kept the number of charters I did for these fish at an absolute minimum just enough to survive the winter. I had promised myself when I started guiding that I would not let my personal gain take precedence over the wellbeing of the resource. That's why I'm broke.

Then in 1993, I noticed a significant drop in the population of winter trout and every year for the past seventeen the number of these fish has steadily declined annually. For the past five years the fish simply are no longer present in numbers to justify targeting them. While working with Harte Institute this past winter, five trips resulted in one trout caught and two missed on the strike. That is a lot of fish to just disappear.

The simple fact is that the time frame of this decline coincides with the great increase in the use of live finfish as bait for trout and also in the number of guides working saltwater in Texas. Interesting; isn't it?

What troubles me, if I understand it right, TPWD doesn't include any numbers on surf trout in their surveys of trout population. If this is true it means there are a lot fewer trout in all of the systems (when including the surf) than TPWD realizes. Others considered me to be the master of this winter surf trout fishery and it's heartbreaking to me that it is now just a historical footnote. There are so very many of you who eat, breathe and sleep chasing big trout in the winter. Can you visualize waking up some morning and it no longer being possible? Well, that's what happened to me. I can imagine it but I also have no doubt proper resource management can inure this never happens. It's funny but even as I write this I know good and well I will be down that beach freezing to death looking for those trout this winter just as I always have even though I know they aren't there. Guess I'll bring the wife home some pompano to justify going.

Had a ball recently. I knew the jack crevalle were going to be thick so I called my friend, Jimmy Jackson, of Beeville and he, his daughter and son and law and three other daughters went fishing with me the next day. I also called my pal, Jeff Wolda, from Bulverde and told him if he wanted one last day of the jacks he needed to get on the road. We all met up down south of the Big Shell and shortly thereafter all the adults had fought all the jack crevalle they required for the day. Next thing I know Jeff is teaching 10-year-old Brooke Vestal to throw a cast net and she is doing fine at it and then she finished it off by catching a twenty-one pound jack crevalle by herself on 10-pound test. I was touched at the whole scene. Complete strangers one minute and all having the best time of their lives as if they are lifelong friends the next. More laughing and hollering and whooping than at a New Year party. That's what I call fishing and I think that is what most folks go fishing for.

Man, what am I going to do with thirty years worth of 51 MirrOlures? What a hoot.