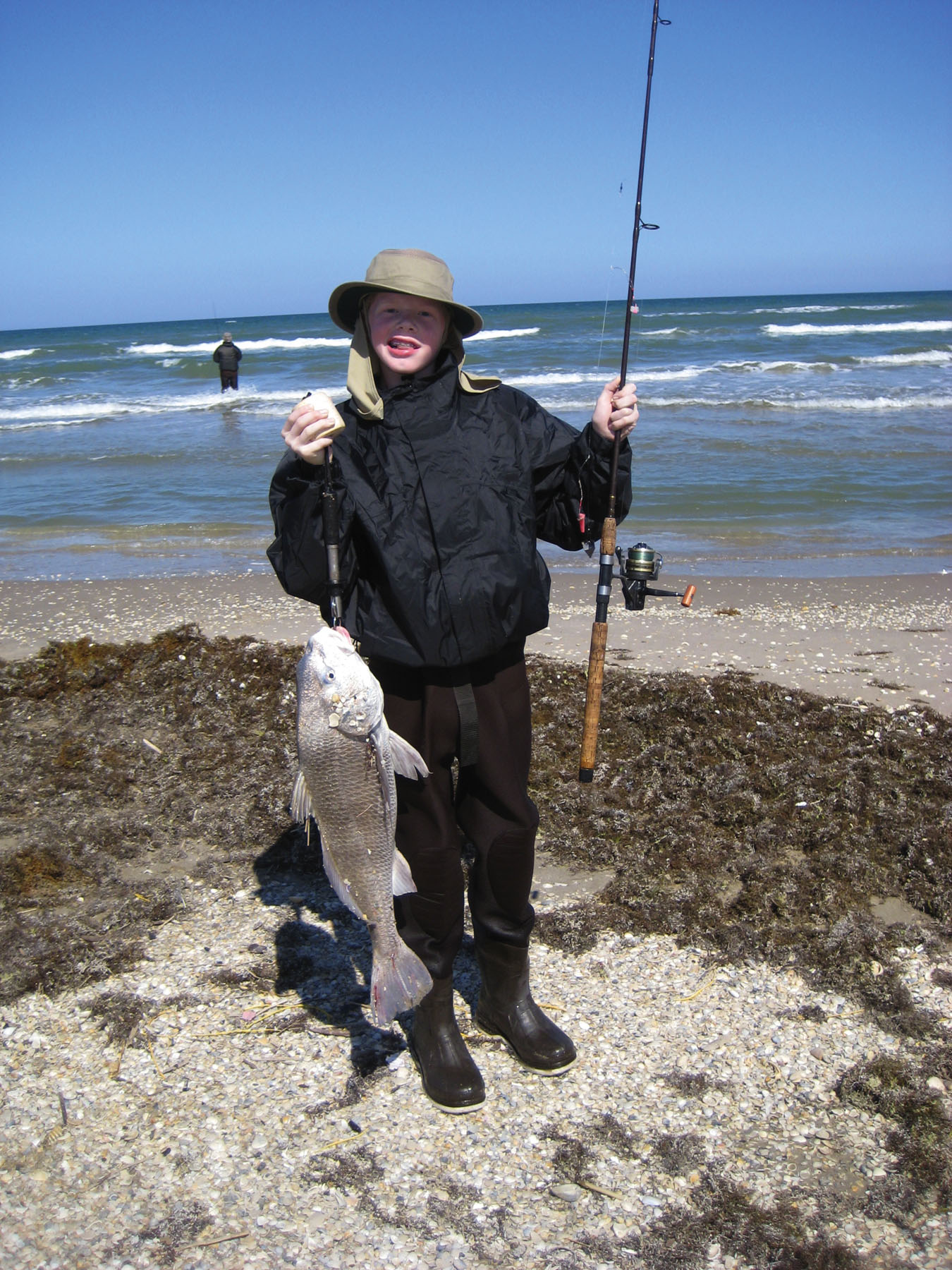 Lang Anderson, age 14, and his dad fished with me on PINS recently and enjoyed the reds and drum.
Our local weatherman, Dale Nelson, says this has been the coldest winter since he arrived here twenty-three years ago. I tend to agree with him on that fact.

We've had short term events where the temperatures dropped much lower and resulted in substantial fish kills but these events were of short duration. This winter has been different with extended periods of mid-30 range at night while day after day the highs reached only the low-to-mid 50 range. That's the unusual part and from anything I'm hearing it sure hasn't helped the overall catching much although there was a good early-spring black drum run.

For decades I have referred to the winter months as "the time of the starving moon" and this winter has certainly earned that title. Checking back through my log books I find that on this date last year the water temperature was 71.4 and the year before was 71; today it is 64 degrees and that pretty much tells the tale.

I always tell folks that Mother Ocean will turn on sooner or later but that she does it on her time schedule; not the time schedule of man. Actually we have been catching good numbers of fish, just not the glamour stuff. A red and black drum now and then and large numbers of good-sized whiting have been our stock In trade for some time but it's time for our seasonal change and for some reason I have been anticipating good spring fishing behind this hostile winter and still do. I know lots of us are looking forward to it.

From the large number of vehicle problems we had on the Big Shell Beach Cleanup it is obvious lots of folks haven't been doing their winter maintenance so take the time to have your truck checked out before hitting the beaches. I'll share a tip with you that long term beach drivers have been using for many years.

We keep vehicle maintenance log books just like you do in the military. Every time we change oil, filters or have repairs done we log it in the maintenance log with date and mileage. On the beach I regularly change out my engine oil and oil filter every 1,500 miles. I also regularly change transmission fluid and filter. Probably sounds like overkill but in reality it's not.

I also keep a log book on my outboard and list every repair or lower unit lube replacement. Takes all the guess work out of all of it and just makes good common sense. I never go to the beach without eight quarts of spare transmission fluid, eight quarts of engine oil, a spare serpentine belt, several cans of Fix-a-Flat, an air compressor, jumper cables, hose clamps, some short pieces of hose and a tow strap. It never ceases to amaze me that folks constantly go down there with no back up supplies whatsoever, not even a shovel.

A recent first was the two fellas who had ran their battery down by using their computer powered by their car battery all night. The concept of spending the night online down south of the Big Shell just goes right over my head. It went over their battery's head as well.

Speaking of record keeping, I even keep a fishing line log book with each reel listed, what line was put on it, how much it held and the date. Nah, none of it is overkill. It's just plain, good, old common sense. When you think about it, if a particular type of line has a short lifespan it will alert you to the fact that its poor quality compared to your other lines and you can discontinue using it and save money by replacing line less frequently.

Had a little deal going on this winter that took me a while to figure out and I'll pass it on to you. I've been throwing 5/8 ounce 51M Mirrolure twitch baits on 8 ' rods and basically the same spinning reels for 25 years. I stay very open-minded and when new products hit the market I give them a try.

I've been using a variety of braid lines for about eight years. Then the past two winters I noticed my casts were shorter than they have been all these years.
I knew what it was but played around with several lines and then I took that braid off my reel and went back to throwing the same mono I've been using for twenty-one years and immediately my typical, long casts returned. Interestingly enough I noticed this same braid line on a baitcaster does a superior job, but it obviously increases friction on the spinning reel spool. It is even likely that this will not happen with all spinning reels. My guess is that the flared shape of the spool of the particular model of reel I use is the culprit. It's just something to think about. Every time they come out with a new product we all instantly thing we can't live without it but the truth is no one product is the best for all applications.

We catch more of a variety of smaller species of sharks in the spring than at other times of the year. Many of these are now catch and release only by new TPWD regulation. Get some of their ID pamphlets and study up on your shark species so as not to harm species illegal to keep.

On March 15 Russell "Moose" Wheeler, went out on his sportfisher, Fiagzi, with a full crew consisting of Russell "Yakmon" Weir, Todd Neahr, Michael Shindle, Todd Horn and Rush Battle. Their goal was to put a $5,000 satellite tag in a mako. They have made several unsuccessful trips previously this winter but persistence paid off this time. Russell Weir fought a 9'-3" male short fin mako and Todd Neahr of TPWD was able to get a satellite tag in it. That's awesome guys. Congratulations. The information that tag could provide science may prove absolutely invaluable.

As of April 15 the speed limit on PINS will be reduced to 15 mph and this will continue through July 1 due to Kemp's ridley sea turtle nesting season.
Report nesting turtles to 1-866-887-8535 or 361-949-8173 ext. 226-228. Do not interfere with nesting turtles. Mark location of nest after turtle has left to assist the turtle recovery techs. Report stranded mammals to 1-800-9MAMMAL. If you can't get phone service remember that there is service at the Mansfield jetty. It is jellyfish season and the best remedy I know of is acetone.

Good fishin' - If we don't leave any there won't be any. Capt. Billy L. Sandifer