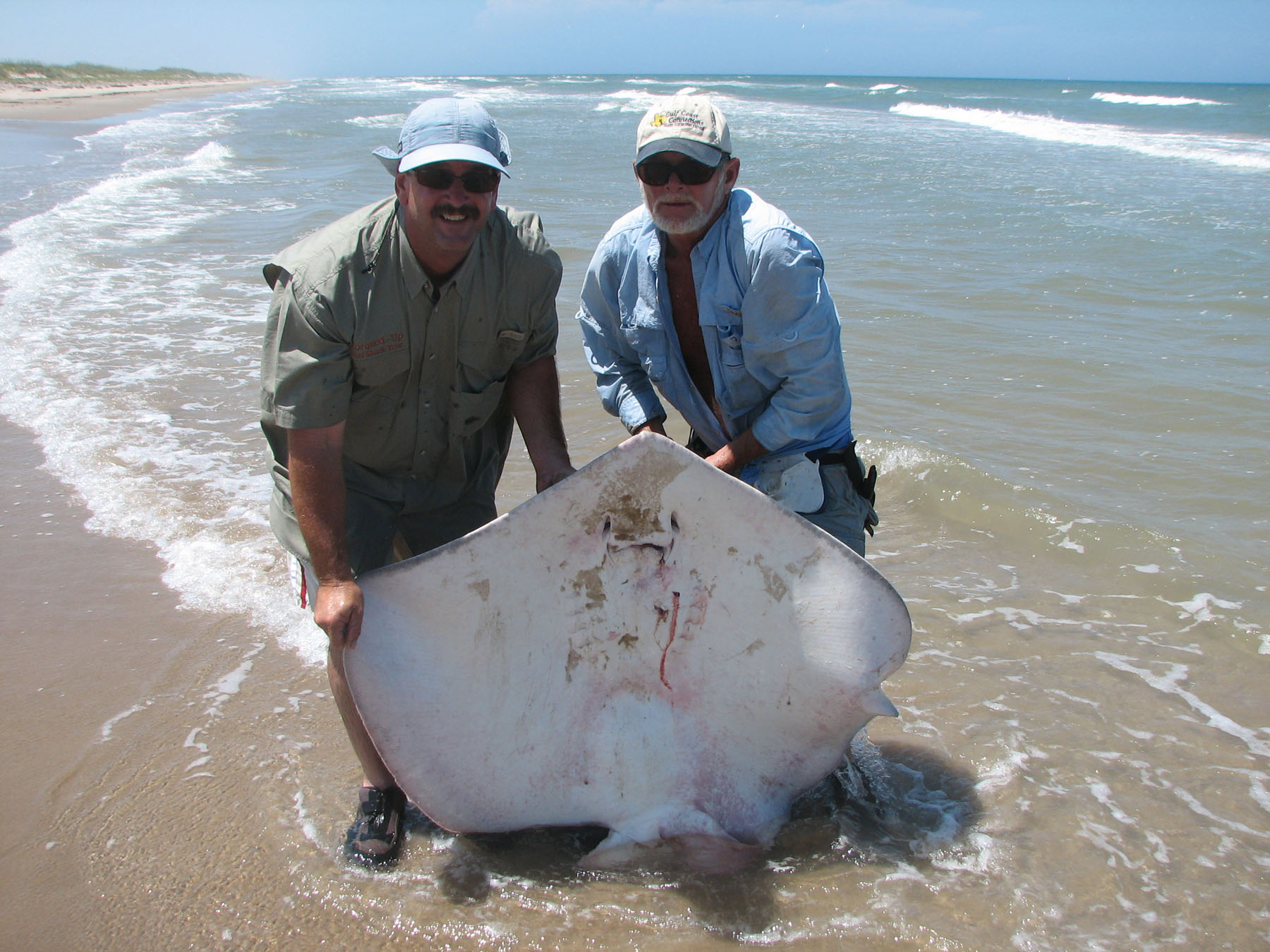 Kevin Davidson of Midland with a 22.5 lb rough-tailed stingray landed and released on 16 June 2007.

The sea was calm and crystal clear, yet every few miles along the beach I could see spots where reddish-muddy water seemed to be appearing out of nowhere along the outside bar, creating stretches of muddy surf for some distance in the otherwise Caribbean-like sea. Knowing that sharks like to use such an area to hide and then dart into the clear water and attack prey, I began dropping shark baits and was rewarded with some really good catches.

This was long before the "sit on top" kayaks arrived and baits were taken out in vinyl life rafts. I also soon learned that the water at these locations was far cooler than the surrounding clear water. I asked my mentors and was told what I was seeing was an upwelling of a deep offshore current impacting the surf zone. The colder water was forced downward by the warmer water in the surf zone and eroding the outer sand bar when it contacted it.

As our climate changes I am seeing more of these instances and they often occur on a much grander scale. Twice during June these upwellings have impacted the shoreline of PINS for extended periods and turned 30 to 50 miles of surf zone from crystal clear to mud-colored within hours and it stayed muddy for as long as 10 days straight. Due to the amount of beach affected, they bring a strongly negative impact. Obviously there is nothing a fella' can do about it, but when planning a trip there is a web site that shows water temps throughout the Gulf and checking this site will forewarn if such an event is in progress. The site
is:http://www.landbigfish.com/watertemps/watertemperatures.cfm?ID=8.

August is usually calm with clear water, little current and lots of baitfish present and this presents special problems to anglers. It is finesse fishing. And while it does present special problems there are ways to deal with it and actually it's a lot of fun. You just gotta' understand how to play the game. We do a lot of sight-casting from July through September and sight-casting is a favorite with most experienced anglers; including me.

The most successful tactic is to downsize both lures and leaders. This goes hand in hand with practicing stealth when getting out of the vehicle and approaching potential target fish or structures close to shore. It's mind boggling to me when we see four big trout lying in a foot of gin-clear water 20 feet from the water's edge and then when we stop the customers immediately slam the doors on the Suburban. I simply get back in the truck and say, "let's go." When the folks look puzzled I say, "Where are those fish you saw?" They look, and of course the fish are gone. It's that simple.

I NEVER use any leader material of less than 30-pound test in the surf. Simple enough; I personally fish for really big trout and a really big trout will cut anything less with its canine fangs while shaking its head. BUT I am also acutely aware that often more fish will hit smaller diameter leaders even when using fluorocarbon. The choice is yours. I have found that if lots of large skipjack are being hooked, nothing less than 52 pound fluorocarbon or 30 pound Hard Mason leader material will survive the chaffing, and 80 pound fluorocarbon or 50 pound Hard Mason are considered minimal for tarpon.

The nesting season for the Kemp's ridley sea turtles is winding down as of 27 June, but a few late nesters may still appear and the loggerhead and green turtles will continue to nest later into the summer. So far, a total of 128 Kemp's ridley nests have been found on Texas beaches with 73 of these being on PINS. In addition, 3 loggerhead and one green turtle nests have been found on PINS. The number of Kemp's ridley nests is up from 55 total on the Texas coast two years ago and 105 last year. These numbers are evidence of how successful the Turtle Recovery Program is and it is tragic that it is at the very time that the program is dangerously low on funding.

Replacing the ATV's with UTV's required all available funds early in the nesting season following the accidental death of a patroller when an ATV rolled over. With less than 2 months of use, 6 UTVs already have blown engines and the program is in dire need of contributions from the private sector.

Folks often ask me to describe the beaches of PINS and my one sentence answer is always the same. "The environment on the beach is savage and hostile and it takes its toll on all things." Until recently I had not understood how federal programs such as the Turtle Recovery Program operated and I found the answer rather stunning. You might too.

I always figured, well, it's the government and they have plenty of money. Well, that ain't it. Government money gets funneled to this and that and the National Park isn't very high up on the priority list. Most National Parks have a support group of private citizens who donate and solicit donations for projects within the individual parks. Quite simply that is how the parks survive.

There has never been any such group or effort to support PINS. At the same time Nat'l Park Service personnel are not allowed by federal regulation to solicit donations. Man, talk about up a creek without a paddle! At this time several individuals, including myself, are involved in the legal aspects of forming such an organization to be supportive of programs on PINS and other issues involving Padre Island, but such undertakings require time. I'll keep you up dated as progress continues on this but in the interim the Turtle Recovery Program continues to be in need of financial support.

Any contributions can be made directly to the Turtle Recovery Program. Mail address is Padre Island National Seashore attn: Dr. Donna Shaver P. O. Box 181300 Corpus Christi, Tx. 78480-1300 or Express mail to: PINS Ranger Station 20301 Park Road 22 attn: Dr. Donna Shaver Corpus Christi, Tx. 78418. Be sure to write "Sea Turtle Program" in the memo section of checks. Due to lack of funds, all patrols will cease on July 15th.

through the month of August. Please drive cautiously and watch for baby turtles. If they are observed please report it immediately to 361-949-8173 ext. 226/228.

Loggerhead and green turtles may continue to nest so please report sightings of their large tracks to the same numbers.

Releases of Kemp's ridley hatchlings will occur regularly and are quite the treat to see. To get info about upcoming releases call the Hatchling Hotline at 361-949-7163.

Be Careful, Be Courteous, Be Kind - Capt. Billy L. Sandifer