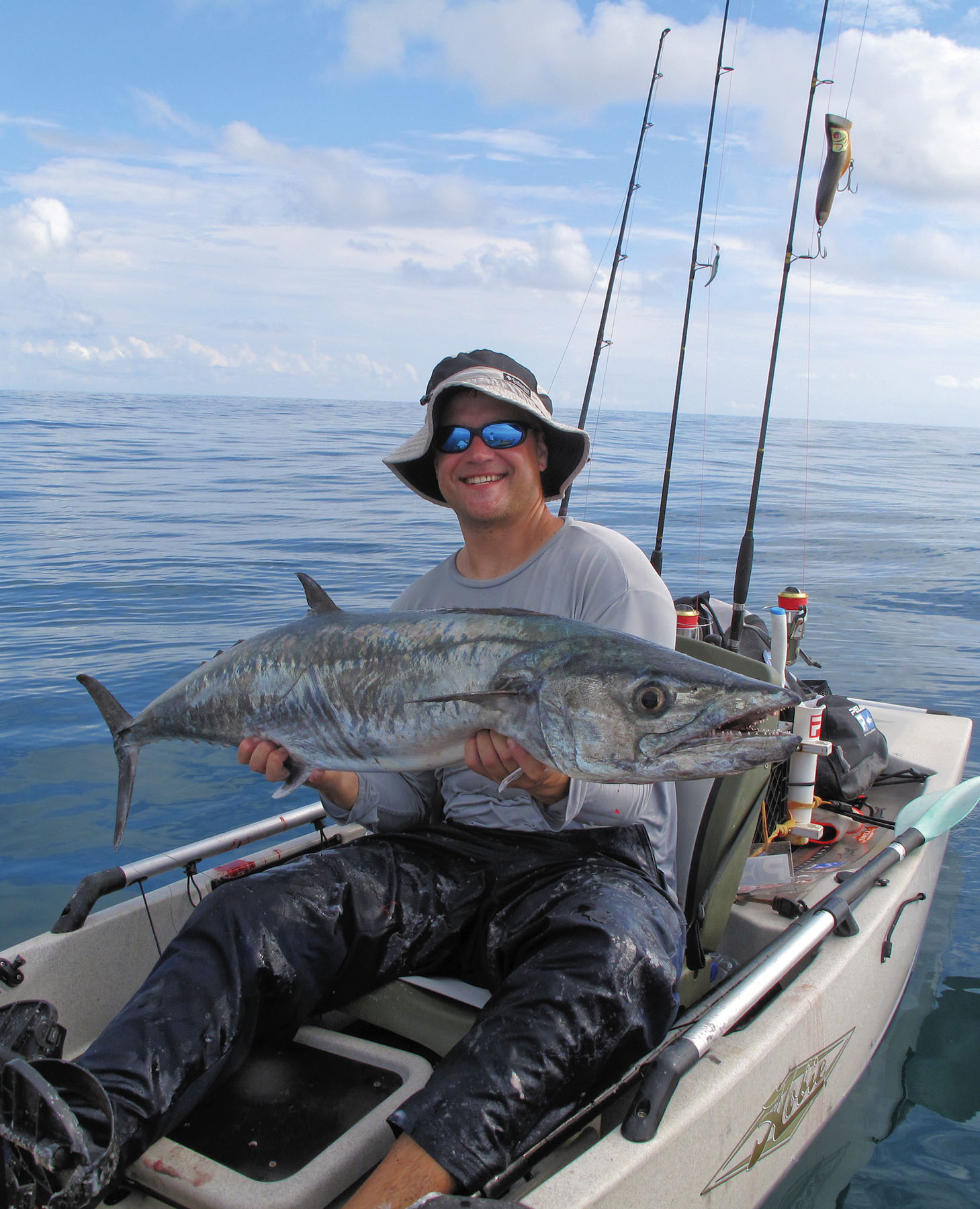 Eric “Oz” Ozolins has been having a ball trolling Sebile lures behind his kayak along PINS.
Every now and then I write about the cold offshore currents that impact the beaches of Padre Island National Seashore. The cold water is pushed downward by the warmer water of the surf zone and it stirs up the sand on the second sand bar. It's often quite visible and all too often turns the surf off-colored and on the worst days to the color of chocolate milk. These impacts are not new and have been documented over time. Some reference sources say as many as thirteen currents can impact the shoreline of Padre Island at any given time. Over the past eighteen months they have become increasingly more common than I ever remember and to tell you the truth this same time frame has been some of the poorest overall catching I ever remember on PINS.

For the past two months the water has been cold along the lower twenty miles of the PINS beachfront. Cold enough my customers won't wade very deep even though it is a calm and hot bluebird day. My guess is that the water temperature is running in the lower-60s some days. We have learned the hard way that the trout and reds avoid this cold water and have given up fishing the lower end of PINS on account of it. Harte Institute has promised a high-quality thermometer for measuring water temperature and I will soon be logging water temperature every five miles as I travel the beach. This could provide valuable data that has never been available to beach anglers planning fishing trips to PINS and also the scientific community as they seek to unravel the mysteries of climate change and other things. It'll probably be a couple of months before I get this program up and running but when I do I will start providing it to the public on my web site www.billysandifer.com. Boy, I sure would want to know what the water temperatures are along the shoreline the day before Sharkathon.

On 11 August, Dr. Greg Stunz, Laura Bivins, and their crew from Harte Institute - Texas A&M Corpus Christi, fished with us to capture surf-run spotted seatrout for their tagging program. We stayed north of the 20-mile beach due to the colder water there. We also brought in some ringers: Capt. David Rowsey, Jeff Wolda of Bulverde and Bob Beckett of Boerne. Jeff is a tough, hardheaded, ex-Navy Seal who has been fishing with me for several years and has become a brother to me. Well, THEY caught twenty seven speckled trout and eight redfish on topwaters and MirrOdine lures. I took quite a bit of teasing as I was the only person who never caught a fish. Of course I was quick in my reply, "It's not my job to catch fish; that's your job. My job is to take you where they are and figure out the color preference and pattern for the day."

Privately, I thought back to Ralph Wade, who was in his sixties at the time, fine tuned me in the art of surf trout fishing. I was in my early 40s. It wasn't long till I beat him daily and it really got his goat. I told him, "Mr. Ralph all I'm doing is what you taught me. I'm just younger and can work at it harder than you." That perked him up and he was alright with it after that.

Now Rowsey is a natural phenomenon, but Jeff kept right up with him and I have done a lot of fine tuning with Jeff. So, I'm not particularly disappointed when they beat me. Actually it makes me proud to know I had a hand in the knowledge and skills they've acquired and I'm also reminded that now the shoe is on the other foot. I'm in my sixties just as Ralph was and they are in their forties. Looking at it from the perspective of a long time fishing guide, I can't think of any higher compliment than teaching others till they beat you now and then. Sounds like I've been earning my money. The conditions were exactly the same as they've been since mid-July and yet this one day doubles any other day during that time frame. It's obvious that the fishermen's skill levels are what made the difference. Nothing but study, observation and time with a rod in our hands increase our skill levels.

On 25 August I watched the beginning of the upcoming change of the seasons. By early September shoals of dusky anchovies will show in the surf and several species of predators including tarpon, sharks and mackerel will be feeding on them steadily. The first couple of cold fronts will bring millions of finger mullet migrating from the bays to the Gulf and slot and oversized reds as well as hoards of jack crevalle will be in pursuit of them. September and early October are the time of the frenzies and the surf zone will become a killing field as some species migrate south. Florida pompano will arrive and become readily available through the end of December. There will be sharks working the immediate area of frenzy and it is paramount that anglers remain on guard for them at all times. Trust me on that one.

There are some unexplained events of concern going on at PINS. On 04 August I found no fewer than sixty six dead or dying stingrays in the last twenty miles of PINS. I collected a specimen which was turned over to TPWD but nothing has been heard back on it yet. Also ten white-tailed bucks and one doe have been found dead in the past few months. Normally I see three or four dead deer in an entire year; so this is an unusually high number. Coyote necropsies after the red tide showed unusually high mercury contamination although the red tide toxin from fish they were eating caused their deaths. The larger concern is where this mercury is coming from. PINS Natural Resources Division put in for funds to study where the mercury was coming from but didn't get the requested funding. The upcoming Environmental Assessment on the appropriate speed limit on PINS requested by an organized visitor group is making deep inroads in the Natural Resources funds available. So, we'll just have to wait and see what happens from here but suffice to say something sure isn't as it should be down island. And it's awful tough to try to come up with funds from benefactors for needed projects when there is so much animosity between the visitors and NPS management groups. For me: personally, it never changes. I'm not mad at anyone. I'm on the side of Padre Island and all its inhabitants. I hope generations of humans are allowed to continue to visit there and that NPS is able to do a good job of managing and protecting the resources.

The worst of summer is behind us and the best three months of fishing are ahead. What a hoot. If we don't leave any there won't be any. -Capt. Billy L. Sandifer