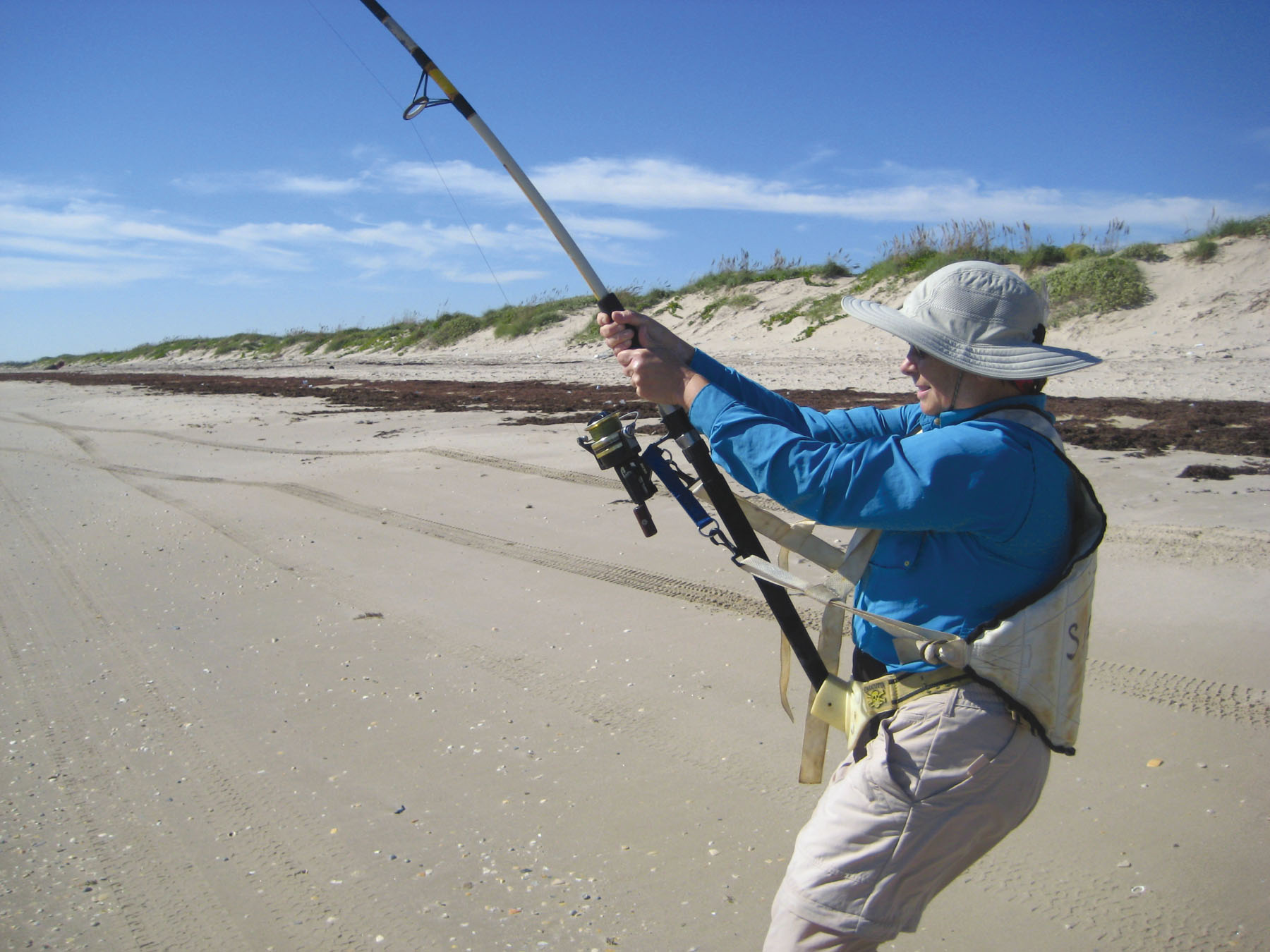 It has been too hot for too long and I eagerly await the cold front that is forecast to come through tonight. When folks ask me what causes red tide and when we get it I always reply, "We get red tide when the cold fronts are late and the summer heats stays too long; tropical storms and hurricanes increase the chances."

My observations over the years have always led me to believe fish expect the transformation from season to season to occur in timely manner and when one season overstays its normal time span it puts them off their feed and our catches bear witness. Of all the months September is known on the PINS beach to hold the greatest potential for spectacular catches of a wide variety of fishes but it can also be a very mediocre month. The determining factor is the arrival of fall-like weather during the first few weeks to kick off the wonderful fall fishing. Summer hung on forever this year and September was plagued with tides to the dunes most days as the result of tropical storm activity. And although the finger mullet migration is in full swing, the water temperature is still too high for the large number of predators to show up. This leaves us fewer days to enjoy the glory of the fall fishing season.

The good part is that our best fall fishing is yet to come and you gotta like that. The downside is that we may have already lost the best days of our usually brief and highly-treasured PINS tarpon season for the fourth year in a row. Presumably, the tarpon remain further north as a result of the extended summer heat, and when they finally make their move southward they hurry right past us on their way to the Tampico wintering grounds. The number of days that tarpon will linger on the PINS shoreline is highly dependent on the presence of various anchovy species. Anchovies are known for forming "bait balls" as they travel southward along our coastline. The dusky anchovy seems to be the most favored by the tarpon although both bay and long-nosed anchovies may be mixed with the dusky variety at times. The basic rule of thumb here is: The more anchovies the more tarpon we encounter and the longer the anchovies stay the longer the tarpon linger in our area. So far I've seen very few this year but things are running late so we'll know more shortly. I know this info might seem untimely here in the November issue of this publication but it is valuable information none-the-less toward understanding the presence and migration of tarpon in the future.

As I have reported in earlier issues of this magazine, Harte Institute for Gulf of Mexico Studies at TAMU Corpus Christi has an ongoing research project to track the movement of spotted seatrout that have been outfitted with surgically implanted electronic transmitters. These transmitters "ping" location specific data to receivers positioned strategically within the bays and passes where the fish were captured and released. It has been my genuine pleasure and privilege to be in a small way a part of this work. Corpus Christi Caller Times Outdoor Writer, David Sikes, wrote a good article about the results to date recently. As I am a lifelong proponent of the "tide runner" theory, I am thrilled with the information already gathered and am using some of David Sikes' numbers with his permission.

Most readily available data regarding the movement of spotted seatrout within our bays and along the Gulf beaches would lead us to believe that trout are mostly homebodies and travel very little. Personally, I never put much stock in this and I know no long-term fishermen who did. The Harte Institute study has placed 35 receiver units and 79 trout have been released with transmitters. So far 14.5% of the trout have been recaptured by anglers and the survival data retrieved to date suggests 65-70 fish are still swimming and their transmitter units are still sending data. The greatest distance traveled to date by a single specimen carrying a transmitter has been 69 miles during the period of February 1 through April 6. Another trout logged 35 miles in 16 days. The data gathered by this project will greatly increase scientist's knowledge of the species movements and should prove invaluable to those responsible for managing this precious resource. A big "way to go" to CCA Texas and the Rotary Club of Corpus Christi's Harvey Weil Sportsman Conservationist Trust for providing funds for this very valuable research. I also offer a "hats off" salute to graduate student Laura Bivins; research assistant Megan Robillard; Dr. Greg Stunz; and all the other hardworking folks participating in this study.

I am personally acquainted with quite a few scientists in various fields of study and it really stunned me years ago when I asked a marine biologist pal a specific question concerning a particular fish species and he looked me dead in the eye and said, "I don't know Billy. I don't think anyone knows." I was just as stunned the first time a PhD. asked me for an opinion concerning a particular fish behavior. I replied, "My God, I'm a barefooted farm boy from eight miles outside of Agua Dulce, Texas, who barely graduated high school. You spent all that time in schools to learn this stuff and you're asking me?" We both had a good belly laugh and he replied, "Yes, but I've been stuck indoors studying while you have had all those years of field experience and that is also valid information we need to comprehend." Makes sense; doesn't it. Now if someone could convince the upper echelon TPWD of that we might be getting somewhere in the case of spotted seatrout management.

Bottom line to all of this is that even with years of education and research data at his disposal, Homo sapiens is awful big on what he thinks he knows and not many folks realize how very much we don't know. Science requires supporting data. Once that data is obtained and evaluated it can be used to aid those involved in fisheries management to better understand and develop management plans for the future and sustainability of our marine fisheries resources. Awfully important stuff, I'd say. We have so much more information than in my youth but there is still a whole lot of unknowns out there and it's always been the unknowns that attract my interest.

For fifty-two years I've asked anyone and everyone where the finger mullet are going when they migrate along the Gulf beaches in the fall and why they migrate at all as these are not sexually mature individuals. The only answer I have ever gotten is south. That covers quite a bit of ground. Adult mullet supposedly spawn in some unknown place far offshore somewhere. I keep getting the mental picture of billions of horse mullet chirping on top 150 miles out in the Gulf of Mexico somewhere with every predator between Galveston and Tampico hammering them. Boy, bet you could sure get your string stretched if you discovered that unknown location.

In my youth everyone knew that tarpon spawned in lagoons, bays and rivers in Mexico. Now the accepted information is that tarpon spawn at some unknown location far offshore in the open Gulf. Probably not far from where all those mullet are spawning would be my guess. Now, please do not for one second think I am by any means whatsoever being critical of scientists. Quite the contrary; I applaud their work and find them excellent companions. I wish there were lots more of them doing research and more charitable groups willing to finance studies. All I'm saying is that there remains a whole bunch of unanswered questions out there and a whole lot of unknown places. Think of how big of a role the mullet play in the food chain of our bays and inshore waters and what a treasured gamefish the tarpon is, and yet big pieces of their life cycle and reproductive habit are totally unknown to us. It's a hoot; ain't it?

"If we don't leave any there won't be any." -Capt. Billy L. Sandifer