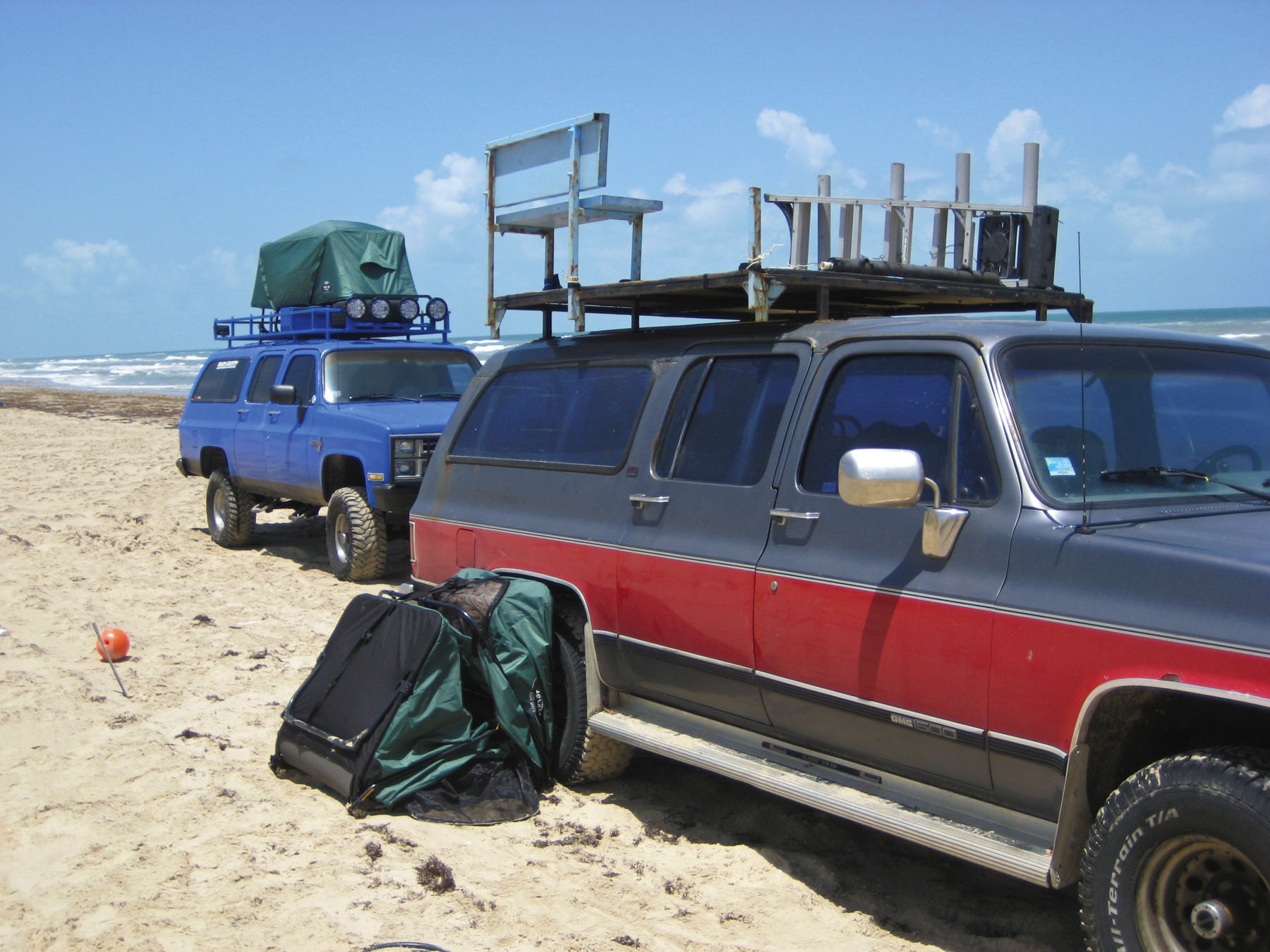 Unending sargassum has led me to installing a roof rack on my truck. Placing rods up high allows much of the weed to pass underneath the lines; allows fishing when it would be impossible otherwise.
The past eighteen months have been some of the poorest fishing I have ever experienced and likewise it has been the toughest going I have ever encountered as a fishing guide. Interestingly enough, in my case, too few charters has not been a result of the sluggish economy as it has been with many other guides. High winds and seas, sargassum, and tides to the dunes, have cost me two-thirds of my scheduled charters. For the past two weeks I have been working for the National Park Service at PINS as a biological science technician with the Natural Resources Division. I'd like to share some personal insights.

Picture this if you can. I am several miles down island parked off the main track and standing alongside a white four wheel drive NPS pickup complete with Padre Island National Seashore decals, in full NPS uniform, conducting a survey of bird species present. A number of late model SUVs approached from the north at speeds exceeding 50 mph. Without slowing, they passed within ten feet of me as if I wasn't there. Before the afternoon was over this scene was repeated several times. I kept milling this situation over in my mind; wondering why this has become so commonplace. It is not nor has it ever been acceptable to drive by parked vehicles or camps at high speeds. This is not only the official law of the NPS but also a part of the commonsense code of beach ethics established by the regular beach fishermen before I ever showed up down there fifty years ago. I noticed the great majority of these vehicles lacked normal beach fishing accessories such as front bumper rod racks, lift kits, and oversized tires. No fishing equipment was visible in many that passed.

For many years the fact that nobody had injured or killed a sea turtle with an automobile on PINS has contributed greatly to our continued opportunity to drive the beach. That all changed on 21 July 2010 when a beach driver ran over a stranded juvenile green sea turtle. The turtle was still alive when discovered by NPS personnel and was taken to Tony Amos's rehab center in Port Aransas. It appeared to have suffered spinal injury.

PINS regulations state that northbound vehicles have the right-of-way; no ifs, ands, or buts. Recently a southbound driver who refused to yield nearly caused a head-on with a friend of mine. My friend stopped him and asked if he had read the signs regarding northbound right-of-way. The guy replied, "Yeah, I read it but I just don't care." Are we beginning to see a trend here?

On Saturday, 17 July, I drove by a shark fisherman's camp and observed a four foot bull shark rotting in the sun. The guy never took the meat or even removed the jaws; just caught it and left it on the beach to rot. A similar incident of Sunday, 18 July, was reported to me. It seems several lesser black-tipped sharks of 5-6 foot length with jaws removed were found in a pile down in the 40s. Both are illegal, but of greater importance to me is that they are wasteful and morally wrong more from the "I just don't care" clan. I inquired whether photos had been made that might reveal the identity of the miscreants, license plates etc., that could be given to NPS or TPWD. He replied that a large group of people were present and he felt uncomfortable to do so. We MUST be willing to take action and report violators for the continued well-being of our fisheries. If nothing else; call when you come off the beach. PINS enforcement division phone number is 361-949-9238 and TPWD's Operation Game Thief is 800-792-4263.

Lately I've been noticing large camps parking lines of vehicles to intentionally block an entire beach other than a narrow passage near the dunes where there exists much danger of tire damage. A friend encountered such a group recently and told one of the campers that it was illegal as well as inconvenient and dangerous to block the beach in this manner. The drunken reply was, "What I should do is get my gun and blow you away," before he staggered off.Give me a break. I've come to think of this as the "I'm important and you're nobody to me" syndrome and it is the very type of behavior I lived down island for eighteen months many years ago to escape. Now it is as commonplace down island as it is anywhere else in society and that is a true tragedy.

I rarely charter in the bays anymore because I am intolerant of rudeness. I refer inquiring customers for bay trips to David Rowsey or Mike McBride because to me there is no fun left in the bays. E.J. spoke of overwhelming numbers of users in last month's editorial and that's all true but it is not the numbers that get me. It's the self-centered attitude and the rudeness that I won't tolerate. Used to we said, "Well, they probably don't know any better," and in many cases that may still be true. But my money says that the statement, "Yeah I know, I just don't care" is the larger part of it. I'll still do a bay charter with a select few customers when it's not croaker season but have no desire to be in the bay once croaker season starts. There's a line in a song that says, "Fishin' is fun and fishin' ain't fishin' if fishin' ain't fun." On my charters fishing is fun. We all better start caring if we want to continue our outdoor activities with as few restrictions and regulations as possible.

On 21 July official notice was made that an Environmental Assessment scoping process to analyze safe beach driving speeds by the regional level of the National Park Service is in the making. By the way; the REGIONAL office decided this, it was NOT requested by NPS PINS. Many see this as the beginning of the end for driving on PINS and some of the possible actions/changes listed in the EA are scary. This EA is not the beginning of the end of driving on PINS. It has been a gradual thing evolving for several years as the number of beach visitors increased dramatically and far too many of them "JUST DON'T CARE."

I got tickled last Saturday when a fisherman flagged me down to tell me "Jaws" had just swum past him in the first gut. Then I received similar reports as I traveled further south. Then at the 50 mile beach I saw an enormous manta ray feeding on the surface and realized what they were seeing. At least eight large manta rays were in the surf and fishermen were mistaking them for giant sharks. One shark fisherman had gotten a violent strike Friday night and his 9/0 reel was stripped in minutes. While kayaking the next morning his group found his float and leader over a mile offshore. The bait was untouched. My guess is that one of the manta rays fouled his line. Don't you know the spooling of that 9/0 reel in the moonlight was quite a show. What a hoot.