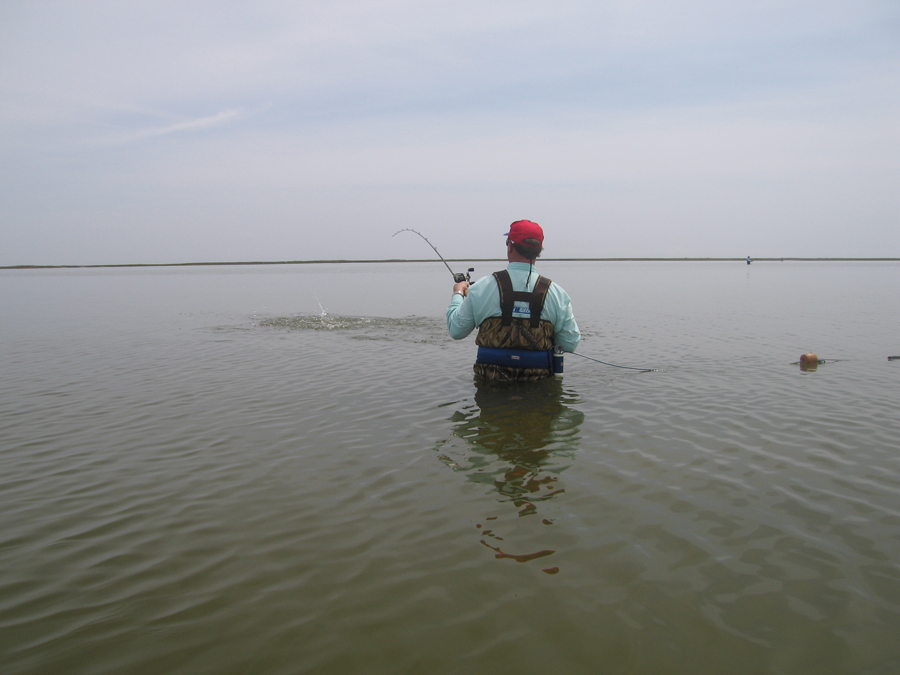 After winter blasts moderate, coastal anglers find trout stacked in guts and in muddy areas with scattered oyster shell.
Freezing wind chill readings send most Texans into the closet for a firearm or jacket, not a graphite rod. There is something about cold weather in Texas that send images to the brain of camouflage, webbed-feet and tall antlers, not speckled trout and redfish. The misconception that falling mercury readings are not conducive to coaxing speckled trout and redfish leave many Texas bays barren of boats; however, the experienced plugger knows fish, like humans, congregate in chilly weather. And, where you find one, you will probably find many gregariously gathered in the nearest channel or deepwater structure trying to escape the frosty chill of Old Man Winter. Fishing is simplified - find a hole or sudden elevation change, and you will most likely find fish - lots of them. Here are five locales in Texas that get hot when the weather turns cold.

In winter, deeper water is much warmer on the bottom, especially when the floor is composed of mud. The mud acts as an insulator to hold in the heat that it absorbed during the sunshine part of the day. The bottom of the bay or river channel floor runs from 10-50 feet deep, and does not exchange tides and currents as readily as the surface. Therefore, the basement provides a constant thermostat. Trout and reds like constants.

On Sabine Lake, the Neches and Sabine River hold trout and redfish trying to stay warm. Sleep in and wait for the sun to warm the water a few degrees, then try a Bass Assassin, Norton Sand Eel or Trout Killer bounced on the edge of the river. The deeper holes produce with a Carolina-rigged live shad.

"The shad is the ticket during the winter," said Capt. Chuck Uzzle. "The wind may be blowing 25 knots from the north, but we can hide from it in the rivers and catch lots of trout and reds."

Uzzle said he likes to work the breaks in the river where eddies form and funnel bait in the current.

The Spillway in Trinity Bay is always a wintertime haunt due to the warm water discharge created by the power plant. Trout and redfish seldom turn down a fresh peeled shrimp or live mullet. Drift the reef in front of the Spillway with slow-sinking Corkies, Catch 2000s and 51M MirrOlures.

Galveston Bay's Offatts Bayou is a traditional spot for winter waders. The Blue Hole in the bayou drops to 20 feet, and waders work their red shad, black or plum soft plastics on the dropoff and score large trout. The colder the better for Offatts; and, many a trophy trout has come from the deep waters when frost is on the ground.

The Flood Gates in Moses Lake near Texas City is another deep water haunt for trout and reds. Best bet for success is a natural offering, though many trout fall victim to glow Corkies and Bass Assassins gingerly worked under the lights at night. Rat-L-Traps and white or pink 51M MirrOlures, Crazy Croakers and Catch 5's are great go-to baits as well.

Rivers adjacent to bays on the middle coast are also strong winter players during the daytime hours. Yet, often they are overlooked because anglers are not patient to fish slower and methodically bounce their shad or shrimp imitations along the bottom.

River fishing is like taking a page out of the bass angler's play book. As the sun comes out and heats up during the day, the fish move close to the bank and hang on the drop offs. Troll or drift in the deep and launch topwaters, buzz-baits or crank baits toward the shallows or any structure present (broken limbs, stumps, grass). Patience is a virtue.

A quarter-ounce jig head keeps the bait on the bottom. Fire tiger, salt/pepper, pumpkinseed/chartreuse, morning glory, plum and glow/chartreuse are the colors of choice according to Capt. Mark Talasek.

"Anything that flutters or wiggles its tail will usually work," said Talasek. "These fish are not aggressive; the bite is soft and requires a sensitive rod and concentration."

In West Matagorda Bay, the lower the tide the better for redfish. Waders work the guts of Green's Bayou, Cotton's Bayou and Middle Grounds and find hordes of redfish willing to hit gold spoons and soft plastics.

"It's a no-brainer," said Capt. Bobby Gardner. "Those redfish get in the guts and you can catch them every cast. They are a beautiful red color in the winter."

In Espiritu Santo Bay and San Antonio Bay, mid-bay reefs are the ticket, as long as oyster farmers have not drug their cages on the shell that day. The mouths of Contee Lake and Pringle Lake are good on a falling tide. Corkies, Catch 2000s and soft plastics are best bets for success. A Carolina-rigged finger mullet seldom is turned down.

Obviously, with water temperatures in the 40s and lower than low tides persisting, wading shorelines for trout is out of the question. Some shorelines that are waste to belly deep during normal tides are reduced to mud flats or ankle deep water in the winter. Where do the fish go? They head to the deepest part of the bay and find structure; the middle is normally the deepest and the structure is most often shell.

Why shell? With water almost nonexistent on the shorelines, baitfish have no other alternative but to find shelter and refuge from predatory specks on the only structure available - deep shell. Deep shell in most bays from Sabine Lake to Corpus Christi is six to ten feet.

"Mullet gang on the shell in the winter," said Capt. Lynn Smith. "There are hundreds of reefs out there; if you keep hopping from reef to reef, eventually you will find solid fish."

Rockport's California Hole adjacent to the Estes Flats is a rally point for herds of redfish. As the name implies, the hole is deep and allows chilly fish a chance to warm in the deeper water. Cracked crabs and cut mullet are the baits of choice.

Nearby, the Lydia Ann Channel is a thoroughfare leading to the Gulf of Mexico in which trout and reds cruise to and fro. The flats adjacent to the channel, namely Super Flats, harbors an undulating bottom that is perfect structure for winter fish. For pluggers, a sunny afternoon session produces large trout. Live-baiters toss shad, mullet or shrimp, if they can find it.

On the south side of the Padre Island Causeway in Corpus Christi, the Humble Channel and Emmords Hole are solid locales. Baffin Bay's Tide Gauge, Penescal Point and Rocky Slough consistently hold healthy trout and reds. The Land Cut, a 25-mile manmade channel cut through a land mass to render barge traffic, is a cozy haven for trout, since it is the only deep-water structure in the Laguna Madre.

"Fish deep and fish slow," that is the bluster of winter anglers in Texas.