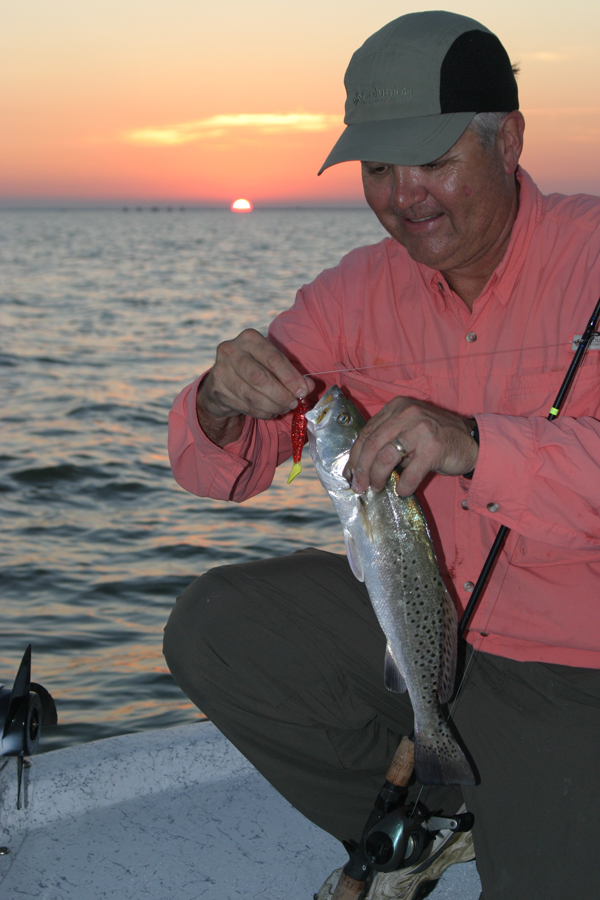 Expect a major feed when the full moon and sun are on opposite horizons.

Capt. Erik Rue trolled gingerly to a piece of submerged shell in seven feet of water and dropped the anchor. Immediately, his emerald swimming Hogie was attacked as it met the oyster bed.

I remained aft; clicking the shutter of my Canon as Rue religiously fought hearty four-pound speckled trout. Twenty minutes later, around midday, my black/chartreuse-headed Top Dog finally got wet. A sashay to the left, then to the right, then back to left. The plug did not make it back to the right.

Like a fat kid doing a belly buster from the high dive of the city pool, my plug disappeared in a wall of white water. If the wake somehow failed to relay the magnitude of the speck to every angler within shouting distance, my Curado's screaming drag did not. This was the one we all dream about.

The gorilla trout of 2001 measured 31 inches - the largest I have ever landed. A fiberglass replica of the magnificent creature sits in my office at home.

Two days later inclement weather pushed me and my buddy Capt. Chuck Uzzle off Sabine Lake. As Uzzle was nosing his Hewes dockside just before noon, my cell phone rang.

"I've got a picture fish for you, boy!" said Capt. Melvin Talasek of Matagorda.

"I just caught her on the old Top Dog," he chuckled.

Talasek was drifting the flats of Port Mansfield when he made the call from his mobile phone. Talasek's fish was another 31-inch monster. Ten minutes after he landed the fish, he hooked another one the same size that he chose to release.

Was it coincidental? Two buddies, eight hour drive from one another, on different saline estuaries, in separate states for that matter, in the middle of the day, coaxed specks of a lifetime within the same two hour span?

Not if the full moon has anything to say about it.

"I book all my trips around the full moon," said Talasek. "Your best fishing is going to be five days before and five days after a full moon. I can check my big fish records all the way back to the 1970s and the pattern holds true."

My mother says she knows it is a full moon without looking to heaven because people act different; the magnet of the moon affects wildlife same as it does people.

"Ninety percent of my biggest fish have been around the full moon," said Capt. Mickey Eastman of Baytown.

Eastman said the two legitimate 10-pounders of his life were caught on the full moon. In 1989, while fishing the full moon on East Galveston Bay's Anahuac National Wildlife Refuge shoreline, Eastman's 10-fish stringer weighed in at a gargantuan 97 pounds.

"You are going to get a good push and a good pull from the tides during a bright moon," said Eastman. "The mullet and bait fish migrate and gang up. Because the bait is on the move the trout are also active, following the rafts of mullet. You will find the fish on the breaks and tide lines."

Perfect full moon conditions for Eastman is a full moon rising and the sun setting. When the two meet and parallel each other, prepare for an attack.

"Late fall, December and February is when you can catch the sun and moon 180 degrees from each other. It's pretty awesome when the fish turn on. It can be a slugfest."

Things That Go Bump in the Night

Pustejovsky does not run as many all night trips like he did in his younger days; however, he said he has had success wading mid-bay reefs in the dark with soft plastics.

"My dad and Rudy Grigar told me a long time ago fish can see at night like they do during the day," Pustejovsky said. "Red shad Bass Assassins dipped with a chartreuse tail is my go-to bait in the day and at night."

If you do decide to pull an all-nighter, know the terrain. It is a good idea to be very familiar with an area before trying to find it in stealth mode. Underwater structures such as reefs and well stems can become invisible at night, especially during low tide conditions. A high-powered spotlight is a good idea.

"I have had some of my better fishing trips for trout at night," said Capt. Mark Nichols of Stuart, Florida, owner and inventor of DOA Lures. "We do not catch many fish on the East Coast (Florida) during the day on the full moon. However, the offshore guys love it and so do some of my buddies who guide on the West Coast of Florida."

Nichols' second and third largest trout of his career were caught on his Bait Buster and four-inch Shrimp, respectively, while wading at night under the moon.

"The fish were caught in less than a foot of water. One was 33-inches and the other was 32-inches. I did not have a scale, but the 32-incher weighed more. I estimated her to be over 11 pounds."

Nighttime Is Not Always the Right Time

Dad and I were standing side by side on the Kenedy shoreline halfway between the mouth of the Landcut and Port Mansfield, both of us armed with chartreuse/red-headed Top Dog Jr's. We worked the shoreline tight early that morning before daylight, hoping to lure a sow in shin-deep water. A redfish was all he could muster.

By 8:00a.m., we, along with the mullet, moved to deeper water. We could make out scattered patches of grass in waist to chest-deep water littered with bait. Throughout the morning our surface-runners were blown-up by spotted predators, but no hook ups. Consecutive casts were seldom met without a trout popping it out of the water. The specks were not in feeding mode, just agitated at the pseudo-mullet noise-maker.

"Am I doing something wrong?" he asked.

"No. Remember, we are on the full moon," I replied. "Just wait until around 11:00a.m. These fish will quit playing with the bait when they start feeding."

As if Cookie banged the chuck wagon's triangle on a cattle drive, the feed commenced at the aforementioned hour. There were no pops or patsy nudges like before; rather, the trout were in full-blown attack mode. When the fish decided they wanted the plastic dog-walker you did not have to set the hook, just make sure your drag was loose so your tackle would not be snatched from your palms. We remained in the same 50-yard radius until the action slowed around mid-afternoon.

"Typically, you are going to have a short early morning bite, right at daylight, and then another major bite from 11:00am to around 3:00pm on a full moon," said Pustejovsky. "My records date back to 1975 and it is always the same. Things have not changed."

Take a look outside tonight, a full moon is only a few days away.