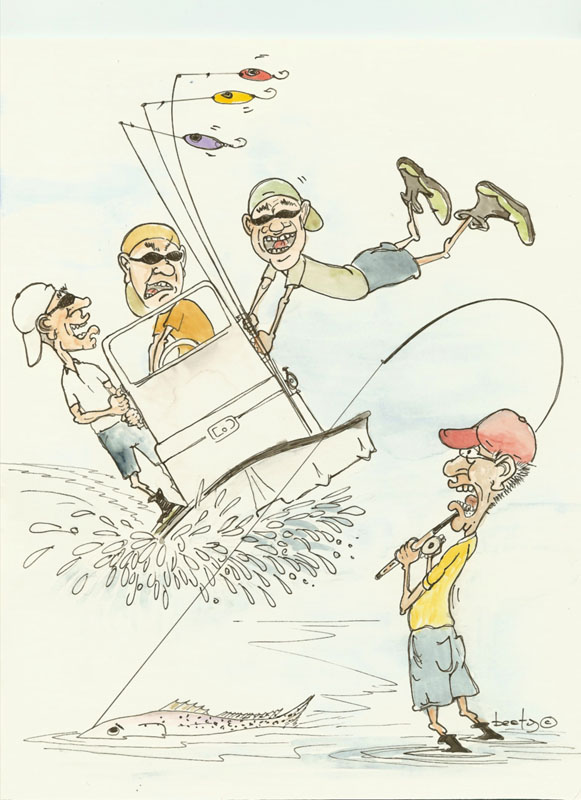 Easing my boat into Rockport's Cove Harbor, the Texas Parks and Wildlife Department technician met on the dock.

"You mind if I ask you a few questions?" he said.

I had participated in a half-dozen other creel surveys conducted dockside along various ports around the state, so I was familiar with the questions and obliged. The survey gives vital information concerning anglers' attitudes and catch rate.

The last question is my favorite.

Normally, I do not hesitate. It is a blessing to be alive - enjoying God's creations gets a 10 whether I take home fillets or not. However, four hours of wading and witnessing a Saturday in Morris Cummings Cut prompted me to ponder a bit longer before honestly answering.

Poor boater etiquette, litter, profanity (verbal and non-verbal) and a sense of irreverence towards anyone but self put a damper on this day; and, it is not happening only in Rockport. I have experienced it in Galveston, Matagorda, Sabine and Port O'Connor. The same disrespect we endure in rush hour traffic is beginning to trickle to our leisure time on our waterways. Not surprisingly, the concrete jungle is spilling over in our bays, over 700,000 people to be exact.

We must do something. That something starts with self.

For starters, slow down! Seventy-five percent of the boats entering and exiting the Morris Cummings Cut on the day in question never took their boat off plane. Though I was only one of two anglers wading this locale, four other boats were anchored in the narrow, 30-yard wide channel; and, the wake they suffered at times left them reaching for a towel to wipe the mist from their glasses.

I was not upset due to the boats ruining my fishing - I continued to scratch out fish even with blaring outboards roaring through the 14-foot deep channel. What bothered me is the impatience and "me" attitude exhibited by the boat captains. Two minutes to idle safely past waders and boaters would not have made a difference between feast or famine at the cleaning table.

I should not be surprised at careless boating practices - there is not a required adult boat operator's license like that mandated to drive a car. I really believe the majority of boaters just do not know what proper boating etiquette is.

How will they learn?

It will not happen overnight. Responsible boaters will have to take the lead. Words are cheap, results will occur from action - your actions. Start from within.

Never run between an anchored boat and a wader. Take the time and go around the boat. Most of the time the wader plans to fish his or her way back to the boat. Use some consideration.

I always wear a bright-colored shirt when fishing a bar in the middle of West Matagorda Bay near Port O'Connor. It saved my life once. There, boaters are notorious, especially on weekends, for running within casting distance of waders. Besides the disregard for others, boating that close to waders is dangerous. Three summers ago, an inattentive boater, with the help of a few of his crew, finally decided to look where he was going in time to yank the steering wheel to the right 30 yards before hitting me.

It was not like boat traffic was heavy. My boat was the only one in sight for two miles; and, I was wading within 100 yards of my boat. The guy driving the boat had the entire bay to navigate, yet, for some reason he was drawn to my locale. Steer clear and this will not happen.

If unpleasant boating displeases you, keep your cool. An obscene gesture or foul language never solved a problem. Instead, make a mental note of the action and learn from it; ever attentive so not to replay the action under your own navigation.

Texas' population is growing daily. With that, new anglers are being born. What attitude will these new outdoorsmen and women learn from us? Take a look in the mirror.

Litter is another thing that gets under my skin. Leaving empty beverage cans on the jetty granite, tossing a candy wrapper overboard or allowing a plastic bag to blow out of your boat, anyway you spell it, it's littering.

This is not an isolated incident. I teach in public schools and see this irresponsibility daily. Where did America learn that it is alright to litter?

Where does all the trash go? There are no garbage pick-ups in the bay or Gulf of Mexico.

I'll tell you where it goes - to the bottom - or floating along your favorite grassy shoreline or in the belly of your favorite gamefish or wrapped around your propeller.

Here are a few basic outdoor rules we can live by:

* If you plan to hunt or fish on public property and someone is already on the spot, hunter or fisher, move on. Wake up earlier next time, or go to Plan B. Do not screw it up for the guys that have already taken the time to setup. Do unto others as you would have them do unto you.

* Stay clear of other boats. Too often I have had boats come within 20 yards of my boat just passing by. Use the entire bay. By getting close to another boat you could be running right through their drift; thereby, running through the fish.

* Know which way the wind is blowing and cross a boat high on the upwind side. A boat may be using the wind to drift a huge piece of water. If you cross downwind you could cut his drift and spook fish. Above all, avoid other anchored or drifting boats. The outboard motor is the surest way to scatter a school of fish.

* Treat wadefishers like you would pedestrians on a street. Give them the right-of-way. Do not pull between a wader and his boat and anchor. Do not pull on the other side of a wader and cut off his wade. Give waders their space. Go down another half-mile and try that stretch of water. If someone is fishing where you want to be, oblige them and get there earlier the next time.

* If boats are anchored in a cut or channel and there is no other way to go but through this area, shut your motor to a crawl and respect those that are fishing. Be considerate and leave as little wake as possible. The same holds true for those bank fishing. Slow it down and respect everyone's space.

* Leave the egos at the marina. A good fisherman is not always measured by the weight of his cooler. I love dining on speckled trout, yet I toss them back when I have enough in the freezer. Practice catch-and-release when possible. This conservation tactic has helped the black bass society immensely; and, we salts, through change of attitude, are beginning to reap the rewards of our stewardship.

* When in doubt, use a little consideration and a common-sense approach. Consider how you would like to be treated in this situation. If you are unsure what you should do, slow down and steer clear. Respect and use courtesy for your fellow man. The charm and jewel of Texas is its vast public hunting and fishing waters that are free of fences and locked gates.

Despite what some selfish people think, we all have a key.