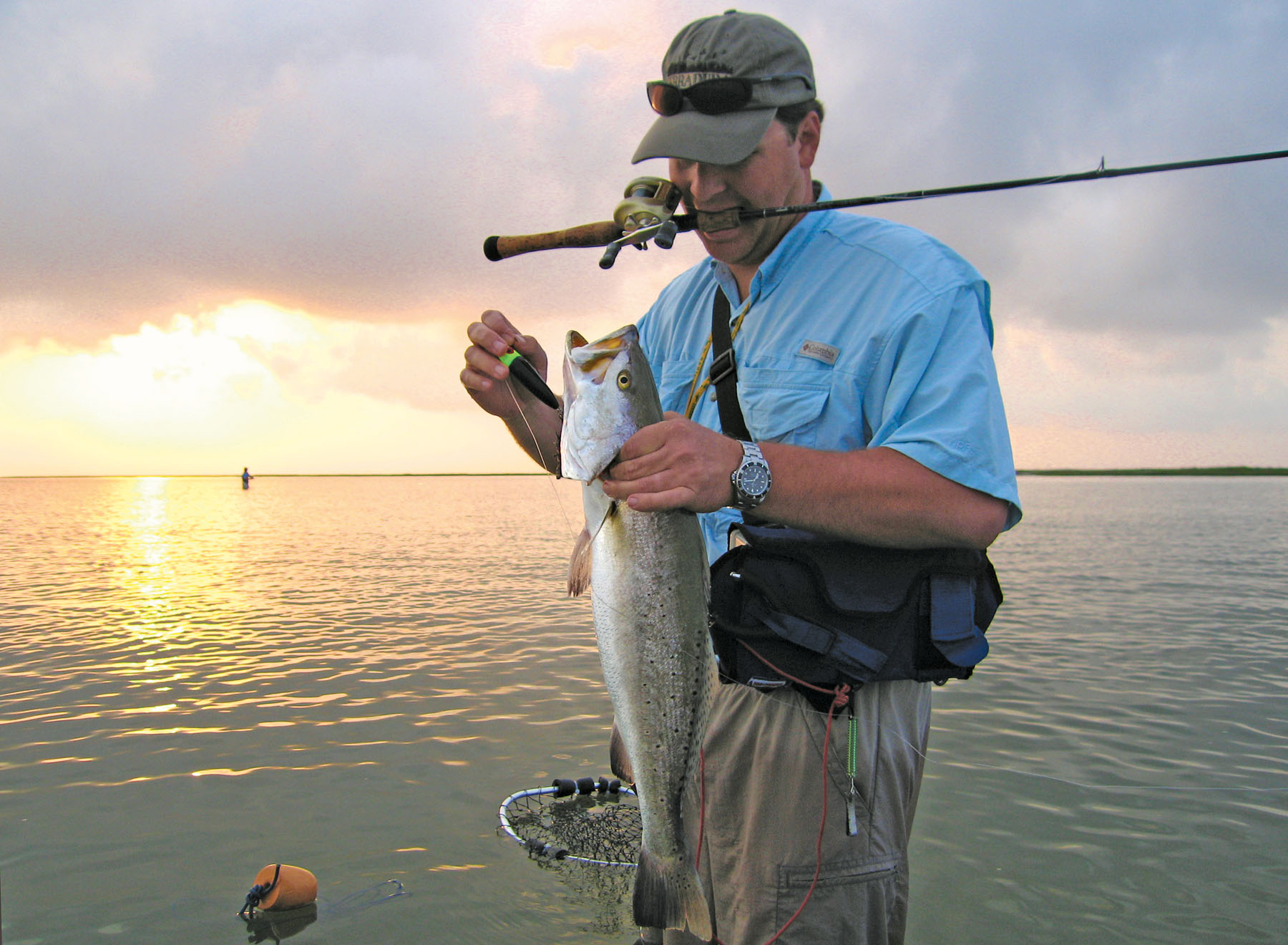 Biologists say that Baffin’s salinity contributes to the number of large fish this bay gives up every year.

Rain dripping from the roof of the Corpus Christi hotel welcomed me as I stepped out of the door to check the weather. Lightning and blowing precipitation kept me pinned to the dock until after sunrise. My destination was some 42 miles away and about 45 minutes into the ride the skies began to clear and my teeth chattered from the mixture of soaked clothes and steady winds. I had come to brave the bad weather and doldrums of winter and early spring. Anywhere else and I probably would have blown the trip off. But, this was Baffin Bay, the big trout playground of Texas, maybe the world, short of the Indian River in Florida; and, I was here to roll the dice and take my shot at her bounty.

Baffin Bay's propensity to yield consistent catches, even in the dead of winter, has prompted many upper coastal guides to relocate during January, February and March. When winter wind blows hard in Sabine Lake, Galveston Bay and Matagorda Bay, a fishing day is pretty much shot; when it blows in Baffin, it is business as usual.

Baffin Bay runs east and west, giving its entire north shoreline protection from blistering winter winds; if the weather shifts to the south, bounce across the bay and work leeward waters. Ardent anglers learn to cast in gusty conditions, or stayed reclined in their favorite chair until the weather stabilizes in May.

Besides its winter fishability, Baffin's lure is its trophy speckled trout. The Texas state record was caught here, a 13.69-pounder duped by Jim Wallace. There are reports and pictures to verify a 48-inch, 25-pound trout found floating during fish-killing freezes in the 1960s.

Biologists believe the Laguna Madre's hypersaline waters, which are saltier than the Gulf of Mexico, contribute to the behemoth growth of speckled trout. A trout in a hypersaline environment does not endure the freshwater swings upper coastal trout do. Flood rains dump fresh water into the bays by way of rivers; and, upper coastal bays need the freshwater for shrimp production and other shellfish.

However, if a body of water keeps a constant salinity, its inhabitants, trout for instance, can grow larger due to the fact they can absorb nutrients more readily. Upper coastal trout must fight to keep their internal osmotic balance of blood chemistry when salinity rises and falls. In turn, upper coastal trout work harder to maintain homeostasis, thereby missing out on some the nutrients their diets have to offer.

Consider a sick person. Doctors often claim rest is the best medicine for recovery since homeostasis is most easily kept when docile. When at rest, the human body is able to absorb and use more proficiently the nutrients from food and vitamins. The same holds true for trout. A happy, well-nourished trout in a constant environment grows larger, quicker, than one that has to swim long distances for food and a saltier locale.

Lack of fishing pressure is another determining factor that builds a bigger fish. Baffin Bay is a remote place. You don't just decide to go fish Baffin for a few hours. From Corpus Christi, it is at least a 40 minute boat ride. From nearby Rivera, it is closer; however, sparsely populated Rivera is not exactly on the beaten path.

There are places for fish to hide in Baffin Bay that are not reachable by humans, and lack of pressure also results in easier homeostasis. Compare it to stress. Those humans with stress live shorter, unhealthier lives, while those with few cares live long and prosperous lives. Now apply that to speckled trout - you get the picture.

Being an avid topwater freak, as much as I hate to admit it, suspending plugs and soft plastics catch more fish in Baffin Bay in the winter and early spring. I am not saying a topwater will not work - it has its applications on warm sunny days between cold fronts. Nevertheless, the majority of cold fish stage on the bottom portion of the water column. There, temperatures are warmer than the surface - sometimes just one degree warmer - but, that one degree can make all the difference.

The lore of Baffin Bay is much larger than its actual fishing acreage. What sets Baffin apart from other Texas bays is its unique rocks. The locals would have you believe these rocks are lower- unit-eating-machines; and, the rocks have ruined a day or two of fishing, prompting a few insurance claims, too. However, stay between the marked channels when on plane and you will have few problems.

The rocks, according to authorities, were formed by prehistoric worms millions of years ago. They provide structure to baitfish, like shell reefs and grass beds, and are magnets for trout.

John Dearman brings the rocks of Baffin to life in his watercolor paintings; though, seeing it for yourself is priceless. Casting to a rock then watching a silver flash dart out of the shadows ranks up there with South Texas Boone and Crockett bucks and banded greenheads.

I will be bundled up in Baffin Bay this winter and early spring. If you want the best odds of catching a heavy trout in Texas, and maybe even the world, you will be too.