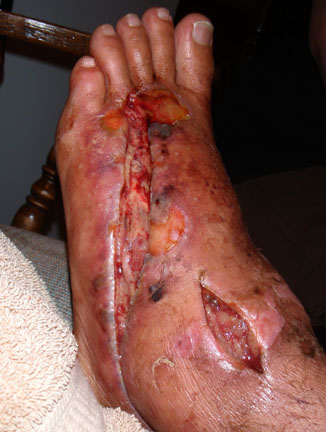 Two weeks later, it is going to take a long time to heal!

In my last writing I touched on the wonders of wearing modern stingray protection. Actually, we wondered which might be worse; perhaps taking a hit once every ten years without them, or perhaps surviving the oppressive mud and gnarly grass with them. Upon this writing I can safely say that a decision has been reached. No matter how uncomfortable stingray boots may be for some, trust me, they will cover your rear end considerably better than a hospital gown.

Yes, I was recently tagged by a healthy stingray. No, I wasn't wearing protective gear. Yes, I can eat some crow if I want to, and it actually doesn't taste all that bad with a little habanera sauce on it, which is, I think, the same stuff smeared on that ray's tail by the way it burned into my ankle.

Much was learned during this ordeal, but ironically, the most impressive lessons were older ones passed down from the ancients. We all might do well to occasionally reflect upon such wisdoms, especially the more prophetic. Two come to mind; "What goes around comes around." And; "Always remember to wear clean underwear." I thought I'd share the consequences of breaching both.

The bottom line is that if you wade fish in Texas; you are wading amongst stingrays. If you are not then you are probably not wading amongst fish either. It's just part of the experience, but according to published studies, the good news is that relatively few encounters go beyond the "Hey, gimme another beer," stage. Supposedly, of the 75O "stings" per year nationwide, few require follow up after initial treatment. Well, let's publish another study of our own, an updated one straight from our own backyard, but first let's review this experience just for sensationalism if nothing else.

I suppose the setting could have been worse. I might have gotten hit while trying to push a boatload of overweight lawyers off of a sandbar, yet fate was merciful this time and I was actually trying to photograph one of Capt. Tricia's clients with yet another 28-inch trout. Curiously I was standing still at the moment of impact, but obviously there was enough wallowing going on to spook the critter into slinging its barb deep into the top dead center of my ankle joint. It was a good hit, delivered with enough force to actually move my foot back.

This is the third time I've been blessed, and each time the stick never felt "clean." Perhaps because of the serrations along the barb, the feeling has been more rasp-like, as though a tiny round bastard file was being hastily jerked through stringy muscle tissue. Can you feel it?

The next sensation is predictable, which is total muscle lockup on the order of the worst Charlie Horse you can imagine. This followed by nauseously sharp pain, followed immediately by a quick suck of the thumb and a sharp yelp for mommy.

I took the standard action back at the house and soaked it in the hottest water I could stand for as long as I could stand, with a measure of bleach splashed in for effect. The pain relief was instant, the swelling appeared normal, and it did not look like anything worthy of a holiday weekend road trip. I let it ride, "to be evaluated maana." All was good until the next afternoon, and that's when the swelling went show time. Black and blue flesh erupted with explosive blisters laced with red streaks. Thanks to Capt Tricia, it was a twisted-ear trip to the ER.

Tip of the Spear

In getting down to business, the real story here is not about an individual encounter with a bumpy-eyed bottom dweller sporting a sharp stick on its tail. It is about a changing world, and perhaps how we may be forced to change with it. In reality, the stingray barb was just the tip of the spear for the real threat, which is an extremely aggressive bacterial infection called necrotizing fasciitis; commonly known as "flesh-eating disease." That's what bought me that unexpected hospital trip, and also where the clean underwear comes into play. I didn't leave for eleven days.

In the marine environment this stuff is still relatively new but we are hearing more about it each year. Supposedly around 25% of those who get it end up dying from it. The main reason could be that the early symptoms look like so many other minor afflictions; a great number of cases are misdiagnosed or diagnosed too late. This stuff is bad, way bad, in fact. Had I been immune compromised or waited much longer, the outcome may have been quite different. If the infection goes systemic, i.e. into the blood system, you are in deep trouble. It can only take a few short hours after inoculation to become life threatening.

There are several types of bacteria than can cause necrotizing fasciitis, the most common being variations of streptococcus, staphylococcus, the widely infamous Vibrio vulnificus, or perhaps a combination. They probably always exist but thrive in warm, brackish water, with salinities between 15 and 25 ppt seemingly ideal.

I was wading the mouth of a muddy, brackish slough south of town. And indeed, most cases we have heard of were contracted in areas experiencing freshwater runoff. We don't know the exact bacteria in this case, but what we do know is that warm brackish water and open wounds are not something to fool around with these days, especially if immune compromised.

That the world is changing is fact. With more people living inland more organisms flow seaward. Whatever happened to "Saltwater cures what ails ya?" This stuff does seem to be on the increase, so awareness and prevention certainly seem more important.

Don't let this stuff freak you out; and certainly don't let it stop you from wading if that's what you enjoy. You can get this from a shrimp spine prick in a bait bucket, so you don't even have to be in the water. What we should do is upgrade our first aid kits to include antimicrobial solutions such as HIBICLENS to immediately flush any skin breaks occurring on the water. What we should do is cover any open breaks with a type of liquid bandage or even breathable waders no matter what time of year, especially if wading in high risk areas such as in the influence of freshwater runoff, and especially if immune compromised with diabetes or liver issues.

As far as gear goes, what we should do is shut up and wear it. Unfortunately, ill-fitting boots and guards can quickly cause chafing and blisters, which can be bacteria catchers as good as any stingray hit, so tall neoprene socks are recommended. Above all, if there is any question at all, just go to the darn doctor. Timing is of the essence, and according to available literature, mortality risk increases five-fold for patients who are hospitalized more than two days after symptoms develop. Once the infection takes hold, antibiotics are not enough and surgical intervention is the only way.

Take proper precautions, make good and timely decisions, and continue to enjoy the wonders we are privileged to enjoy on the water. Just keep that water off any skin breaks and don't wonder about stingray protection any longer – wear it and be done with at least one tip of the spear.