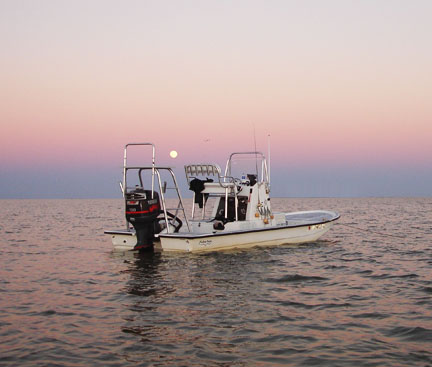 The sky faded from bright blue to crimson yellow; you could just tell something historic was about to happen.

"Man, personally I would never leave this, but hey, it's your call."

Ken and I were standing about a buck and a half's worth of line apart, which really isn't very far these days. We had been the only humans on earth on a beautiful bluebird day, just on the backside of a bone-cutting February norther. Besides the historic potential laid out for us, that big 'ol full moon added even more magic to the seduction. We had both been busy since about mid-morning, working over some good fish basking in sun-drenched potholes barely deep enough to float a skinny water boat. In fact, we had burned up a bunch of mud just trying to get there, and the water surrounding the potholes was so clogged with laid-over grass that it was hard to walk through. Yet, almost every remaining pocket of water held a couple of sunbathers eager to thump whatever moved. Accurate presentations were consistently met with pig-headed redfish determined to kill something, and hopes were high as every so often a good trout managed to beat them to our battered lures. In short, we were wading through good fish trying to find great fish, and being that we had already caught one twenty-eight inch trout over eight pounds, there seemed to be no reason for the world, as we knew it for the moment, to ever stop turning.

However, as compelling as it was, irrational visions of low fruit became more vivid with each release. It all just seemed too easy, too predictable, and if these fish were ready to play perhaps some of even better quality were as well. Why do some of us fish with lures in the first place anyway? For the easy "harvest" of it all? I don't think so. Rewards usually come from taking risks, and hopefully that is what this story is about.

We could have easily just stayed and nobody in their right minds would have ever questioned it. It was the ultimate clich' about a bird in hand, but man 'o man, the call of forbidden fruit was just too much to not risk a risk.

We spooled up and trudged back to the boat, blobs of matted grass pulling on every boot step. I didn't actually see it, but felt Ken's "what's a matter with you" look of forfeit cutting a hole through my back, and most likely it was getting closer to my throat. However, good fishermen are usually easily enthused, and it really didn't take too much for Ken to set his eyes on yonder branch.

"We got the mid-day bite here, so lets go try to get on some real fish when the moon comes up." Still, taking an excited fisherman away from fish to find fish could be a fool's game. You just have to believe.

A twenty minute run put us on a flat bordering a big winter dumping ground, a classic place where big fish bail to when Jack Frost makes it this far south. All looked dead for the moment, but scattered birds sitting across the entire area looked like they had either just left a party or were waiting for one to happen. The signs were right, the place was right, and that big moon fixing to rise just might make the timing right as well.

We anchored fairly deep. In winter Laguna lingo that's just about covers your waist, and we started wading towards the shoreline to eliminate water from deep to shallow. When there's nothing to see but hope that's a smart thing to do. Sure enough, on the outer drop, familiar taps started signaling what appeared to be an abundance of smaller fish. It was another good sign, and hopefully they were the bait for whatever bigger fish might be pulling rank in the warmer shallows.

As the clock ticked closer to the big moon, those taps started getting a little "tappier" and soon some more pig redfish began pulling our rod tips down. Ugh oh, this could be deja vu all over again, but it wasn't long before an impressive trout exploded behind a slow twitched topwater. It was a miss, but hey, "if that class of fish is here, you can bet that class of fish we're looking for is here too. Let's ease on in a bit more... you ready?"

Ken was ready all right, but it seemed that the big moonrise was energizing more than just wildlife. The distinctively irritating sound of a cell phone started to pierce the moment entirely too often, and just as Ken answered it again, the first crescent of lunar orange appeared above Padre Island. I felt a real thump followed by a real headshake. The first thought was another brutus class red, but if it was a trout it was a good one, and one of those worth taking risks for.

"Hey man this may be her!" The phone snapped shut and the camera opened. We ended up naming the short video "Beasty" because the fish was indeed a beast. We still don't know how big she was as we had no measuring device, but after a few pictures and a good release it was Ken's turn. As the sky faded from bright blue to crimson yellow, the bait become more active and you could just tell something historic was ready to happen. It was. Ring a ding. "Hello this is Ken."

Smack! A phone in one hand rarely equals a rod in another, and within just a few minutes I had another epic take down. The phone was safely tucked away now, and we named the next video "Beastier" because this fish was even bigger than the last. We still don't know, but current thought is that after many years of plugging it was probably my personal best. "Ken... your turn!"

It was his turn. Within minutes his rod also bent back on a heavy fish. He too ended up sticking his personal best, and another impressive fish was cut loose to become an incredible fish. On the way back to the boat the quietness of the aftermath was as inspiring as anything. It's great when a plan actually works... agree?

It would have been a spectacular day regardless, but fishing, the way some of us approach it, is often as much about the discovery part of it as anything else. Leaving easy pickins is never easy, but we can often get so worried about "production" that we miss reaching for those higher branches. Going out on a limb doesn't always work, but when it does... it does! The rest is all by accident. Winter opportunities are soon to be upon us. Your call. See you there.