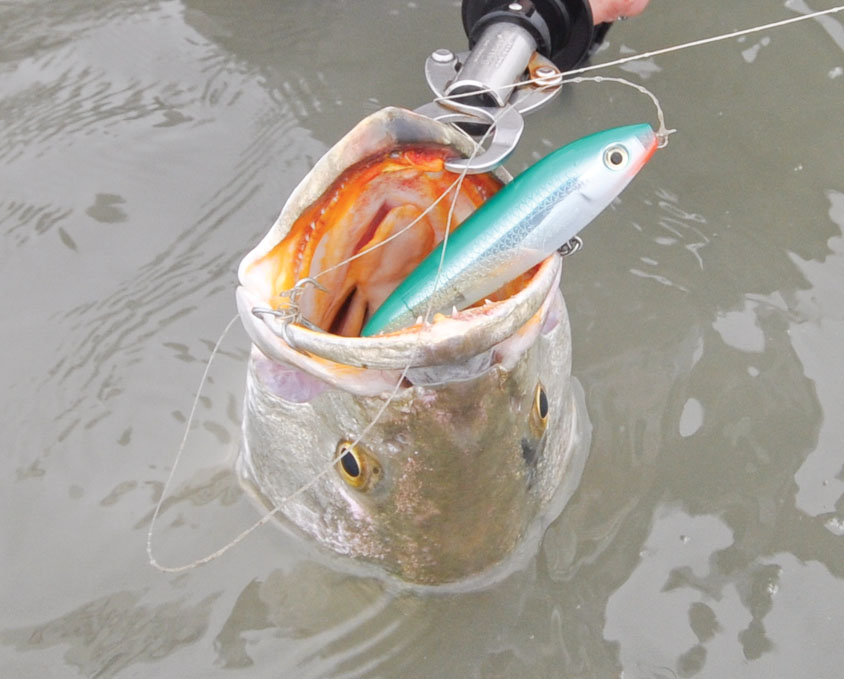 “Onomatopoeia” - where a word imitates its sound. Suck, shake and slurp!

Adapting to changing conditions during the day is important any time of the year but even more so during the cooler months. Few of us can cherry pick our weather shots, so we just have to do whatever it takes to make the most of whatever we've got. Here is a very typical day where we did just that, going from hunting and pecking in the morning to pounding out a topwater bite in the afternoon. Yet, we might have missed it all had we not done a little problem solving. Its the same old different thing, so with that in mind, lets go fishing.

This particular morning was a few degrees below crisp, so said your naked finger tips riding a stainless steel helm. A strong norther two days prior had dropped the water temperature fully 20 degrees. That's a big change and the fish reacted accordingly, bailing off the flats to more comfortable depths. At first light it was like the night before Christmas where not a creature was stirring. There was zero surface movement and the only wings in the air were those flushed by airboat props the only noise on the planet disturbing an otherwise surreal morning. The water was slick and the sky hazy, lazy and low, meaning there would be little warming for a while.

All of Parker's buddies had bailed on this adventure, but he came anyway figuring it may be a good time for a private lesson just like we do in golf or many other sports. Despite the dead-looking start we both held high anticipation. Something would surely happen sooner or later, or so we hoped. Well know it when we see it. But in the meantime they had to be somewhere so it was time for a little bite management where you make something happen when its not.

A successful adaptive angler is seldom far from a good tail; touts, worms, plastics, whatever you want to call them, but in the right hands they can often tickle a dormant fish into responding. While waiting for nature to resume active life we had to do what made sense; go on faith that although they were hunkered down they were still catchable. We walked towards a deeper shelf rimming some deeper water and started fan casting, exploring each contour and shade difference with various angles, slopes and slow drags. Often it took several casts to the same spot before wed finally feel that tick of a subtle pickup. Work to find a pattern - then work what you found.

We sorta cheated though.I slipped 5MM glass rattles into some Kelly Wigglers that the owner, Capt. Wayne Davis, had pitched on the front deck earlier. Fishing the BB has been seeming to make a difference, especially during down times. You could barely feel them even with braided line, and when you did, a little forced delay would ensure a good hookset. Most folks I see using no-stretch tend to hit non-active fish way too soon and miss them.

Something I find interesting, another clue for the moment, is that when a fish is hooked dead center it usually suggests they are not really feeding. When they are, the hook is usually in the corner of their mouths because they are aggressively turning on the bait. All of these fish were hair-lipped for now, and yet another down sign was that every fish had little sea lice crawling on their bellies, betraying their location right on the bottom. We would stay with dredging the floor for now, but the low sky was starting to lift a bit.

Calls from other anglers said most were blanking so far, but most were doing the same old thing, and it was comical to watch the drifters not drift in the eerie calm. Our fish were small for now but you take whats offered at the moment, and right now they were all trophies.

We watched the hand of nature wave a few more holes in the clouds, and a few broken spots of light started to sparkle the water with new promise. Puffs of wind from the east started to pick up, making just enough current to float your wading mud trail in front of you. A bait flip or two suggested some movement, then a lone seagull lit next to a lazy brown pelican, or pelicano in Laguna-speak. Our dredge bite stopped, then a tail was hit on the fall instead. Hmmm, well lets just see! A quick loop knot on a Corky Fat Boy found a different attitude, a little faster, a little higher now. A few hard side to side twitches, a teasing stall then thump! The quality of the fish became higher as well.

One of Parkers goals this day was to gain some Corky confidence. There is nothing like that classic double tap, and his eyebrows arched up and stayed up with each one. He was liking his little private lesson, and yes its awesome when you find that zone where everything feels right and you just know you're going to get hit. About an hour more of that and then a Corky suddenly got slammed right after it hit the surface.

Echoing gunfire brought us out of our distraction, and where there was seemingly no life before now there was plenty. The wind veered full southeast and the air filled with thunderous wings of all kinds. Baitfish appeared finning nervously on the surface, and how coincidental that it was all happening right as the moon approached its transit. Its amazing to watch how all of nature seems to work in concert a perpetual mystery. We said we would know it when we saw it, and here it was in full 3D animation.

Decision time; stay with what you know or go for possibly bigger. Every move is a calculated risk, but as the water was going from crystal clear to dusky, a couple of end-over-end mullet aerobatics said Go for it! We sparked the Mercury and adjusted to where bigger fish should be moving up to feed on a shallower warming shelf.

The water on this table-topped rim had absorbed an incredible ten more degrees, and some other heat was on it as well. Corkys were again hit high, this time by some able bodied and more mature feeders. Another adjustment, this time with a topwater. Three or four hard twitches with a chartreuse Skitter Walk, a long anguished pause, and it was onomatopoeia where a word imitates its sound. Suck, shake and slurp! We finished up not saying too much, easy to do when you're in the zone.

The activity shut down as quickly as it started, and with the sun subsiding they were done. No, we didn't catch monstrous fish that day but, we could have, as both of us missed some heavy whitewater. However, Ill never scoff at 4-6 pounders, especially when you catch them on purpose. We kept a few for supper. This wasn't about meat, we were too well fed otherwise.

We got to go through the whole process, from slow dredging to suspended action to topwaters. On any given day some will always catch more fish than others, but those willing to adapt to conditions, as Parker did, usually tend to fare best. We, as fishermen, can all too often be rule and checklist followers, which can easily take thinking out of an equation. Adapting is a deliberate process associated with problem solving, the ability to make effective changes as situations change. We can just fish from a chair I guess, but to me fishing means a whole lot more.

Y'all have fun out there this February!