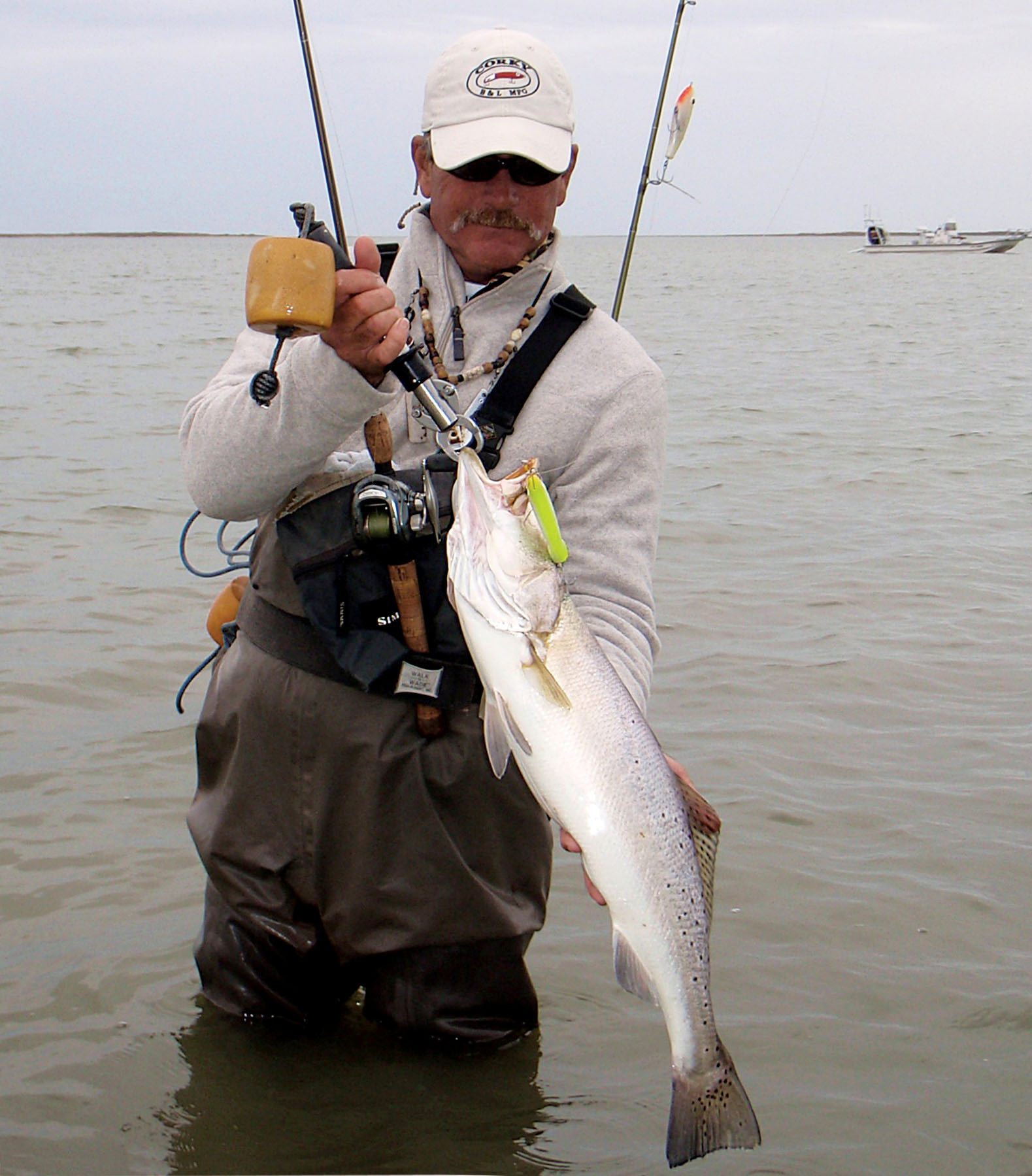 I guess fishing, at least as we know it, helps qualify that theory. We are having a different year down here in the Laguna, and although we are still catching some serious trout, we are just not as cocky as we were last season. What may have been taken for granted before is now taken more seriously. But hey; that can be a good thing.

A little extra challenge should not only help make us better but hopefully more appreciative as well. Something has changed, so we have been getting back to some of the basics of cold water fishing, something we haven't had to do much of in a while.

Last year was warm enough that if you believed in the tooth fairy you might have almost believed in global warming. Big fish were everywhere, fairly easy to catch, and the techniques used and areas fished varied little between fall and spring. They basically stayed shallow and hit topwaters the whole time. It's still fun to believe in the tooth fairy, but we might need to start sticking our teeth under some different pillows for now. The bigger fish have just not been in the same areas. One can only guess; that besides having a real winter, last summer's drought and lingering red tide may also have altered some patterns. Whatever the reason, it has been back to the trenches for best results.

Winter basics can mean a lot of things, mostly it means just doing what many of us have learned before but doing them with more dedication. It is all about finding isolated pockets of fish rather than relying on broader areas; sweet spots within sweet spots, if you will. It means working norther recoveries in greater depth, literally, staying deeper longer, and just plain staying longer, period. It's watching those small signs more closely; letting that tell-tale mullet flip or subtle tap on your lure be enough to continue grinding. If the area makes sense and you are seeing some movement and getting a few bites, you are most likely where you need to be for the moment.

If you are confident in the area, having total confidence in what you are throwing is also critical. Stay with it, adjust the retrieve to figure out the bite and do not waste time tying knot after knot looking for a magic lure. However, too much confidence isn't good either as it can lead to delusional hope. For example, continuing to throw a topwater when it's obvious they are not going to come up is about as productive as the air guitar.

Using all of your timing tools has been very important, making sure you are in the highest opportunity area when you need to be there. For example: a bait-filled shoreline near deep water, late in the afternoon during the warmest part of the day that also coincides with a solunar period. Well, I'd be there. We recently did all of these fundamental things and enjoyed the challenge.

Matt Watson and Brian Cole came down right after the big January freeze. They drove all night to get here and brought all of the right stuff including the right techniques, and most importantly, the right confidence and determination. The question was how long would it take for big fish to recover and feed again after being dealt such a brutal blow. The water temp had dropped to forty degrees. Where would they show up first, and what would it take to catch them?

Day one we chose a deep muddy draw near the ICW, old school stuff we really haven't had to do much of in several years, the old "low and slow" thing. It was surrounded by shallow, warming flats with a good path to deeper water. Very little life was moving and it was obvious that the water creatures had been thermo-shocked and bailed to their safe houses. However, a little mullet swirl here and a little tap there gave us the confidence we needed, so we stayed. Redfish were first to recover and by the end of the day it was hard to stay out of them. We had a few decent trout with Brian sticking two over six pounds. That was all we needed. If the sixes are in there, you can bet fish of a higher class are as well.

It made sense to roll with the same pattern on day two. Going with what you know is rarely a bad thing. Conditions had moderated but the water was still upper forties and low fifties. The wind finally switched to the predicted easterly quadrant, which helped the barometer fall among other things, and we hoped the fish we thought were there would become more aggressive. They were and they did. The slot trout moved in and were fairly easy to catch, but those occasional strong thumps and crushed Corkys suggested there was more. They still identified with the deeper gut but moved higher in the water column as the day wore on. By gradually adjusting presentations higher and faster we started tangling with some better fish. The best ones fed right on the solunar cue, and had we left we would have missed them.

I know many still don't subscribe to the moon as playing much of a role, but I can only comment on what we continue to see, barring other factors of course. Like a light switch, each day the best fish turned on right as the new moon was setting in the afternoons and it lasted about an hour. I caught two over seven, I think Brian had two and Matt stuck one among several others better than twenty-four.

Day three looked awesome in theory, another warming day and even closer to that mystical new moon. Capt. Tricia joined us and we went back towards where we had been. It ended up being the coolest part of the whole trip, and was also another reminder to be diligent to read nature's signs while running to "your spot." Sometimes what you know changes. The wind miraculously died and the water went to glass, and out of nowhere the surface suddenly changed. Before us were literally hundreds of wakes spanning more than one hundred yards. The delicate ripples said they were all trout, not to be confused with bullish wakes made by football-headed redfish. We quickly bailed out into mostly knee deep water. Always maintain a careful watch and never be afraid to stop when you are supposed to.

Tricia stuck two big ones out a little deeper, Matt threw a Corky up shallow for a fat twenty-five and a long thirty, and I had a couple of solid fish as well. We agreed that over the three days we'd caught fourteen trout over twenty-five inches with seven over seven pounds.

Not bad considering, but the truth is many fishermen would never have caught these fish. They either wouldn't have stayed long enough, or spent too much time changing lures to find the groove.

Spring may take us back to easier fish and we might be able to experiment with all sorts of stuff, but keeping your head down with fundamentals will always apply. For now, just get out there in those trenches and fish like you mean it before something else changes.