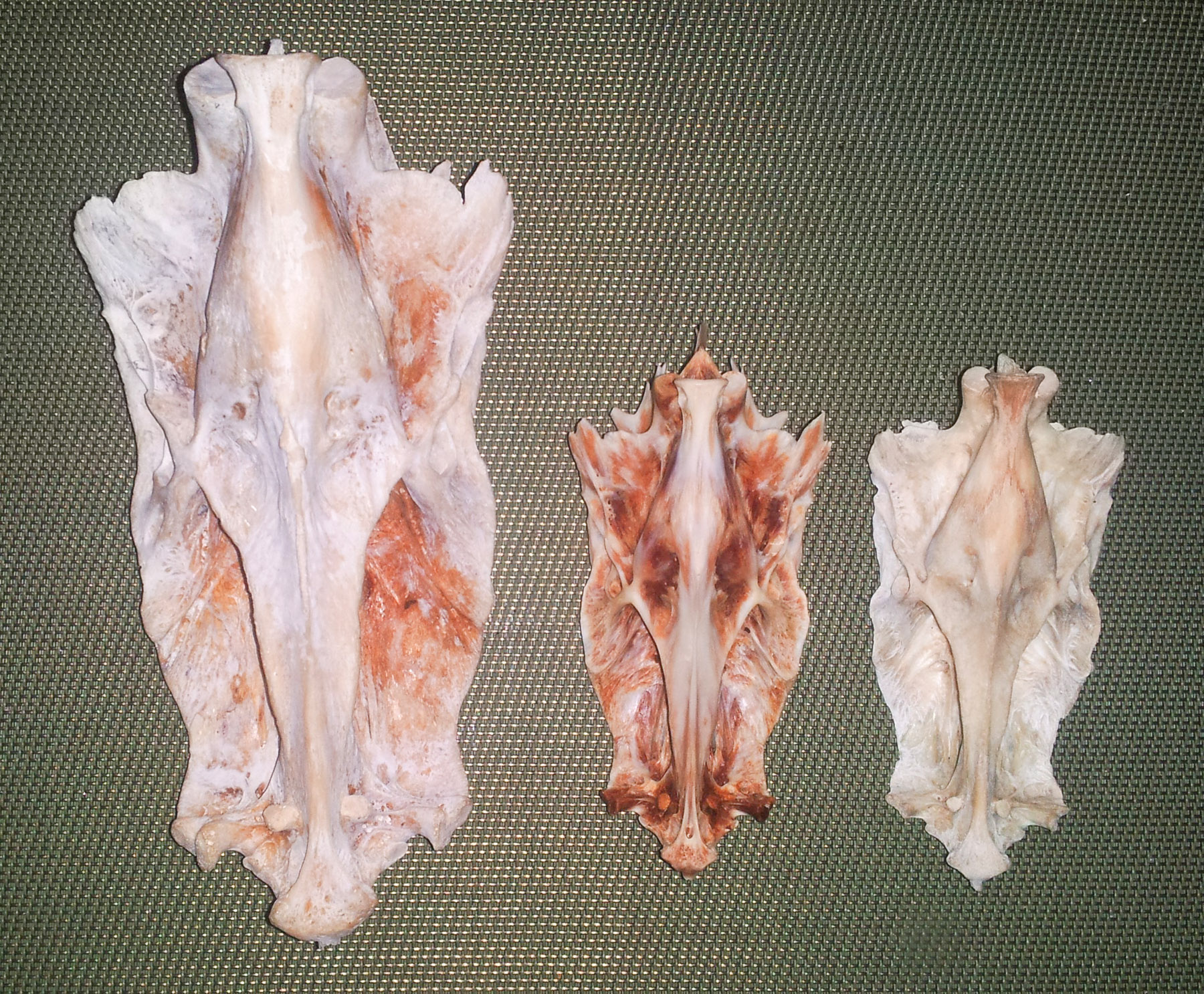 The two skulls on the right are from confirmed 26 and 28.5 inch trout. What sorta creature was the big one?

We Texans have an almost morbid fascination with speckled trout, and its quite interesting that we put them on a higher pedestal than any other state or region. That's especially true for big trout, those elusive monsters we have all been conditioned to dream of. Im going to point a stiff rod at Joe Doggett and Doug Pike for helping build that pedestal, as several times over the past many years, their sports-writing creativity would spark damn near riots to the water. Some of their trout fishing stories conveyed visions of a green tide so mythically strong that the pair were often likened to Pied Pipers. Many readers followed those saltwater flutes, which became for many a life-changing disease and I have to confess it got me too. To make things even worse, I recently found another bit of inspiration that probably makes me terminal with the affliction. I believe what Ive found could be placed on par with a Boone & Crockett class shed antler. Whether its truly what I think it is or not, it has certainly inspired my imagination.

The shed I'm talking about appears to be a speckled trout skull. And if indeed it came from a trout its not just a skull, Id say its more like one of those mysterious Bigfoot tracks, evidence of ancient aliens, a Yeti or perhaps a sign comparable to catching a glimpse of Nessie, the famed monster of Loch Ness. I found it while wading the East Cut in Port Mansfield, and although well have to get it to Dr. Greg Stunz for proper evaluation, it certainly looks identical to other confirmed trout skulls even if ridiculously massive. Oh yeah, I may just be hoping here, but regardless, I will use this mystical bone to fuel my own storybook imagination. But, what if? We can only imagine and that's the greatest part of it.

We've all heard stories of beasts of legendary proportions. A bull elephant in Africa whose tusks reach the highest tree, a whale or giant squid that could sink Her Majesty's ships at will, and a host of others beyond actual proof. Unfortunately, the storyteller never quite gets confirmation - all aboard perished, the film was destroyed or perhaps a camera failure.

Concerning big trout, most of us have our own near-miss stories. Tales of the ones that always get away, equipment failures, never our own. They all must remain just stories though, until we either have a capture or kill, but are usually inspiring enough to spark high hopes for another outdoor quest. But when it comes to speckled trout, one has to wonder whats really out there, what actually swims in the depths or perhaps even the shallows? Are myths to be chased or not? Who knows, but for now all we have are the confirmed current record holders.

The heaviest confirmed speckled trout to date is a 17lb 7ouncer from Florida that handily beat out the previous world record specimen of 16 pounds. It strapped an impressive 39-1/2 inches, but you really don-t want to know the whole story. Yes - he caught it on a Zara Spook - but not only did the guy run aground three times that day, he shipwrecked again when he actually ate the world record fish.

As far as Texas record-fish go, Mike Blackwood's record of 33-3/4 inches and 13lbs-9 oz landed in 1975 held for 21 years until Jim Wallace weighed in with 13 lbs-11 oz, stretching 33-1/8 inches. And for those willing to believe, we also have Bud Rowland's fish. Although he chose not bring a carcass to the scale, his catch from the Lower Laguna is officially recognized at the incredible length of 37-1/4 inches and 15lb-6 oz - on fly no less.

So the question in my mind is If Bud stuck a 37 here, why wouldn't or shouldn't there be a 38 or longer? Statistics say he probably didn't catch the single biggest fish swimming, and if Florida can produce 40 inchers, it might be reasonable to imagine that we can as well. No proof yet, but we have our own urban legends, the ones we've all heard and read about, trout over 40 inches picked up in the Land Cut after the 1983 freeze, an so forth. As for me, just like most, we like to believe on our own personal sightings as well.

Concerning Bud Rowland's fish, although some wont quite bite because he didn't kill it, I do fully believe and, if for no other reason, simply because we think we've seen them, numerous times. I get to fish basically the same zip code as Bud, and we've seen fish cruising our clear flats that look big enough to where you want to neither tell nor guess for fear of being called a whacko UFO hunter. Fuel for this fire comes from personally watching the world in front of you explode when a 16-inch trout, on your lure, gets hammered by a trout that looks incredibly like a tarpon. Of course, discussions like this are worthless without pictures, but are compelling enough to not only fuel the next quest, but can be driving enough to even alter whole lifestyles. That's why many of us launch in ridiculously foul weather, slap mosquitoes for hours, and also get slapped for repeatedly tapping into family budgets and vacation time. Did I mention a disease?

Ok, if trout of mythical proportions do exist in Texas, where might this Land of the Giants be? Most anywhere I would suspect, but a strong bet might be guessing where they probably are not, which unfortunately would be in most areas I've seen the past few years. I sorta doubt that area's hosting armadas of flats burning tower boats, airboats fanning whatever is left of the skinny, nor those the Winter Texans in their deep-vee long-shaft aluminums churn new ditches into shallow grass daily would be the best places to look.

I might also suspect areas with toxic effluents, abnormal algae blooms, or countless other cases of suspected ridiculous human intervention would be very worthy of hopeful plugger either. Actually, it's almost hard to imagine what areas might be left out there for any fish to survive long enough to become a swimming myth, considering weather extremes, modern hooking efficiency, natural predation or continually growing habitat issues.

However, while this thing I found certainly lends great hope, it also raises many more questions, and one big one might be whether we are either protecting or destroying our highest potential areas for our highest potential fish. Another big question is does anybody really care? More probably should, as in 2006, a USFWS study showed coastal fishing in Texas to be worth $2 billion annually. Wow! Just don't tell the wifey what your tackle is really worth.

So what's the next chapter? Who knows, but I imagine we can, and should, all help write it. Subchapters might include something about habitat, boating ethics and hot grease. Again, who knows whats really out there, but sooner or later existing records will be broken. We can only hope it's a noble catch, more effort than luck, but with my luck that skull I found might only be comparable to seeing a divine image on a tortilla. Hey, I'm going for it anyway!