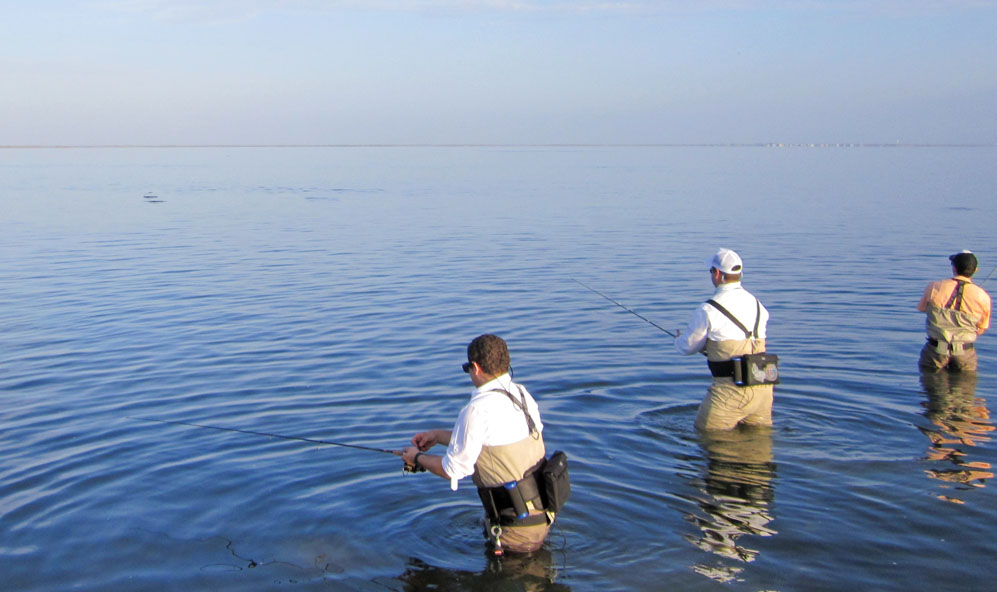 Torpedo the school and you might get one, maybe two. Ease in and you can work ‘em over.

One of the bigger perks being a fishing guide is all the interesting characters you are privileged to hook. Port Mansfield does not disappoint. Any boat slip, fuel pump or store counter can suddenly deliver yet another personality and the corner barstool at the Windjammer Restaurant did just that. Yall meet Jerry Dunn.

Its been said that when a student is ready to learn a teacher will appear. If I ever quit being a student of fishing itll be time to do something else. So you can bet that when I met forty-five years of fishing for a living I cupped both ears.

It would be silly to try and list all Jerrys credentials but, having been dubbed the dean of Texas bass fishing guides might be a strong first hint. Stronger in my opinion is surviving across spans of six decades solely by putting people on fish with lures in areas that experience more dramatic swings in fishing conditions than anything well ever see on the coast. Also intriguing is that despite a vast expanse between fresh and saltwater worlds, some things turn out the same. There are many comparisons that strike home, and yes, I listened. So might you.

With one elbow on the bar and plain spoken as you might imagine a former ranch foreman, Jerry eased back into some of his weathered years.

"When I started, my tackle box was a brown paper sack thrown in a 15 boat with a 20 horse rope starter on the back. Never meant to start guiding, it just sorta happenedbut $45 a day was a lot of money back then even though we fished from sunup till dark.

Wanting to hear more I tried to encourage him, I cant even imagine what all changes youve seen over the years.

I got a look that was more like a starethe way you look at one of your kids when theyre being stupid.

Well, as far as you younger guys go, Jerry winked, There was a time when anglers had to rely solely on their instincts. Electronics changed everything. But all that technology won't help anybody if they don't understand what theyre doing. You can run that GPS and read your side-scanning sonar, but that doesnt mean you can read a shoreline. Its about understanding what you are seeing. Really, its just all bout common sense, and to consistently catch fish you need to first learn about fish and their behavior.

Relating that to my world Im convinced that GPS may actually dumb a lot of anglers down; encouraging the easy path of spot fishing over the finer science of learning natures habits. Lets remember that a spot aint worth much until its time to be there, and that to me is the hook and bull of all of this. And, I want to add, you cant learn it from reading anything except the water.

I had to throw in a poke about lures in general, knowing that bass guys are famous for having tackle stores in their boats. Figuring he may have honed a few things to a fine edge over the years, I was hoping he would like to tell me.

Inspecting his boots for a minute, Jerry looked up and said, Mike, every lure in both of our tackle boxes will catch fish. You can catch a fish on anything. But the truth is, when that lure hits the counter its already hooked what it was designed to catch.

I agreed. With another little poke, Jerry divulged that over the years his bread and butter simply became a Texas-rigged lizard with the only change worth considering being the weight of the bullet.

Interesting that his experience led him to depend on plastics for survival and I think were seeing the same thing on the coast. Surewe all like it on top (!) but, push come to shove, its the worm that most pros rely on to be consistent. So whats in your wallet?

Continuing to compare our worlds, we slipped off the bar stools and ended up at our place. Inside my man cave, Jerry gave a cursory sideways glance at several boxes of stuff cluttering an otherwise perfectly good floor.

You know, he said, There came a time that I ended up dumping all my sponsors and I believe that really raised my credibility.

An eyebrow went up (mine), and he followed with, Yeah, after thatwhenever I offered a client a suggestionthey knew it was because I truly believed in the product, not because of some paycheck.

OK, that was big! Perhaps honor and integrity may have played a small part in forty-five years of success. Ya think?

Back to fishing, the dean squinted a bit, then offered with a bit of passion, Your fish school here. And so do ours at times. One of the biggest mistakes I see is when fishermen pull right up into a school with their big motor. Thats the absolute worst thing you can do if you expect to catch fish.

That got my attention. I can imagine that Jerry and his peers wouldnt dream of torpedoing a school with 250 horses (so common around here) and settling for one fish apiece while they are fleeing for their lives.

Thats like robbing the teller, Jerry mused. I want the whole vault, so ease in and you can continue to work em over.

In my opinion, that single disruptive tactic, that so many on the Lower Coast seem to live by these days (read guides), is actually changing fish behavior. Those big herds of reds pushing water on the flats, which I assume were common eons before humans, are becoming increasingly rare. Some say the legendary acres of tailing reds simply no longer exist, blaming too many doses of 250 ponies.

Freshwater anglers have been well ahead of the saltwater crowd for a good while in many ways. For one, freshwater is simply a bigger overall market and innovations naturally flow in greater number. However, no billion-dollar industry can endure unless its foundation remains solid and the upshot is exceptional stewardship of bass fisheries.

Saltwater anglers remain rooted in filleting and eating their passion while the bass guys quit raiding theirs a long time ago. And while there are certainly many similarities between lake and bay, when it comes to the filleting part, the philosophical distance remains huge.

Jerry says, Nah, we dont eat embut there was a time. We used to clean fifteen per person. Nowadays I dont even own a fillet knife. Theres bigger rewards than that.

Our conversation also included bass chaser Carroll Atkinson, Jerrys fellow guide and longtime friend. Both men have probably seen more on the water than I ever will, so I had to ask. Im curious as to how the whole bass fishing culture jumped out of the skillet and is now almost 100% catch and release. What took yall there?

Jerry thinks it was live-weigh tournaments; the advent of live wells in bass boats. Tournaments became big business, he quipped, and you can take it from there.

Now it was time for me to stare and Carroll seemed confused that Id even asked the question. Sliding forward, and with sincere inland twang, he said; You know, I dont think I can really put my finger on exactly why, but when it started it just kinda kept going. And, he added, Weve been enjoying the success every since.

One more round, so I offered one more questionfor now anyway.

Jerry, you guys have seen in your past a lot of our future. We are still way behind in many respects, so where do you think were going on the coast.

Another boot check. And after a satisfactory inspection, Dunn simply said, Yall are going to go where yall take it, but wherever that is, just remember it just takes one man to start a war. Try to pick the right one.

After finally calling calf-rope on an impressive run of guiding, Jerry hasnt even launched his boat in the four months hes been down here, preferring instead the porch and his cat who he says rules the roost.

I suppose its just his time to kick back and reflect. When its my time, I sure hope I can also say Ive been there and done that. In the meantime Im looking forward to a lot of porch fishing. Weve still got a lot to learn, and yes, Im still listening.