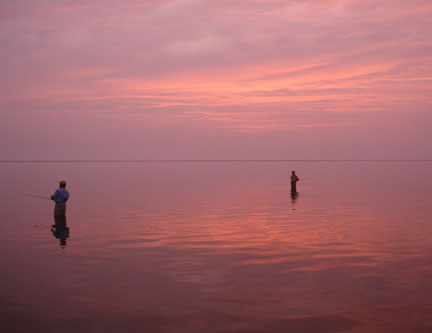 ”We didn’t know what to look for, then it all just clicked in that smooth water.”
“Yes sir; we’re planning to drive down from Lubbock…like to try some saltwater wade fishin’ for a change. And yes sir, we sure thought about flyin’ but we’re all just a bunch of cotton farmers and figure half the fun is gettin’ there. Plus, we’d kinda like to look at everybody else’s fields on the way.”

Trying to get down to business I quizzed, “OK, so just how big a boy are ya? Some of these bay bottoms aren’t exactly ‘plus size’ friendly.”

The Lubbock bunch passed what I term the “attitude inquisition” and being referrals from a favored client clinched the deal. They didn’t have much of a clue what they had just bitten off but watching them chew it would be fun.

Lubbock, we learned, is the largest cotton producing region in the world and has been dubbed, Hub City of the Plains, for its economic importance. Bumper stickers proclaim it more succinctly as, The Hub.  Some jokingly say, “that’s because the hub is the slowest moving part of a wheel.”  We also learned that Troy is pronounced in three syllables.

These eager plowboys were booked to stay with us, six of them in two boats, for three days of fishing and three nights of cultural comparison.

“Y’all have hurricanes and we have tornados. We have bass and catfish and y’all have other stuff. It’s kinda the same but different, right? That’s what we’re aimin’ for…somethin’ different.”

They rolled into Port Mansfield dusty and bug spattered after seven hundred hard miles, offering firm handshakes and straight-up eye contact. Naturally, hats were removed when presented to their second guide, Capt. Tricia, after all this is Texas. We saw all we needed to predict another great adventure, especially since one of the characters was named Ray Bob.

Curious about their gear, I said, “OK, shakedown time. Let’s see what ya’ll brought to fish with.”

“We’ve all fished before but nothing like this,” was our introduction to half-empty spools of too heavy monofilament on too small spinning reels. Rods better suited for yanking 100 pound catfish from irrigation ditches were culled, price tags and all. Fishing Tackle Unlimited takes great care of us so we geared them up with the kind of stuff we use.

“Hey Captain, I brought my bass box, will any of this stuff work down here?” one of our new friends wanted to know.

“Sure, bring ‘em, most any lure that’ll catch bass will catch trout and redfish,” I replied.

“That ain’t what that other guide told us,” he shot back.

“What other guide? I thought y’all never did this before,” I queried, dying to know.

And thus the rest of the story came out. “Well, not quite, not the way you do it anyway. We tried once but ended up pitching live bait with a guy who took us to a place we could have oared to. He drank up all our beer while the bait died. When he finally slurred that we were done I started asking what else might work, like these spoons and stuff.  He said, ‘Nope, won’t work here, time to go.’”

And there was more, “One of our guys, a county judge, had to back his trailer down because there just weren’t no way…an’ we thought he was headed for a first aid at the cleaning table. Gotta be more to it than that we thought, and that’s why we’re here. A man can only look at a cork for so long.”

Getting ready the first morning we swapped a few wife beater tees for better sun protection. With farmer legs glowing below black shorts everybody went into wide-eyed shock as we pulled into a featureless flat. Evidently that first wade stop wasn’t quite what they’d hoped it would be.

“We was thinkin’ it’d be deeper…call of nature and all that, and there we were with this woman in knee deep water, in the middle of nowhere. Well she strapped on a belt and tackle box and got out of the boat and took off while we just kinda hung around. Before we even got our gear on she was way out there catchin’ fish and hollering real loud for us to catch up and we had a good laugh over that. Big Bob caught up with her first and got into some trout and so did Chad, but the rest of us were too busy taking it all in to pay much attention to what we were supposed to be doing. It’s not every day we see stingrays and everybody knows what happened to that crock hunter guy.”

And the story continued, “Just as we figured it was going to be OK, Capt. Tricia started barking that we’d walked through them. She scooped us up and took us back around, but we had lingered a bit too long on the boat, taking that necessary break you know.”

“Bringing the boat to a stop she said, ‘Well I guess this wade fishing just isn’t you’re forte.’ So we hopped out real quick this time knowing we couldn’t sit there because she’d stray off and talk about us.”

It was a slow day but everybody caught fish in a different world. Jay Bob did well on topwaters but his rock crusher boots sandpapered his feet. Elder Bob’s cotton legs turned pink so at least he was glowing a different color, and several other “Bobs” were born.

Bubble Bob entertained us with impressive Jacuzzi-like bubbles every time he waded beyond waist deep. Backlash Bob fought gallantly with his loaner FTU rod with the Sufix braid. Boat Bob braved Capt. Tricia’s scorn, but she routinely took the boat away from him with the Power Pole remote.

Second day, late again to the dock, they said, “Don’t ask.” But we did. It seems three bathrooms couldn’t handle the urgent needs of six men.

Elder Bob got on another hot streak. “He was in ‘em and we was giving the man his room, then Chad goes a motor boatin’ right up to him to get in on the action until that shark swam by.”

“What the heck is that?”  he hollered as he “busted a wake” back to the boat. Their homespun way of describing Chad fleeing certain death.

Jerking on everybody’s stringer the rest of the trip was fun, but Shark Bob didn’t think so.

Wayne hung something big. “That don’t look right,” he yelled as a cow nosed ray went nuts on the surface.

“Get this thing away from me!” And thus Ray Bob was christened.

The third day dawned slick calm with everybody intent on fishing and amazed to finally see things we had been pointing out.

”We didn’t know what to look for, then it all just clicked in that smooth water. I mean we were in ‘em and we could see ‘em!”

Being able to see the fish in the calm water kept everybody on high alert. That’s when we heard one of the Bobs shrieking, “Did you hear that? There it goes again! Man, I think there’s some big bird really mad at us back there, like a pterodactyl or something.”

It ended up being Ray Bob’s reel, a dry bearing protesting against his effort to retrieve his lure.

Overall the fishing was slow, but they did manage several limits of reds and some good trout from the adventure. Their take, though, was very different.

“It was awesome.  We caught plenty and learned more than we ever imagined. You can take a vacation, pay the admission, and never see much of anything. We didn’t only see it, we lived it, now we got it goin’ on.”

Yeah, they do, and bottom line in all of this? If you fish a lot, it’s easy to get immersed in it and forget all the small stuff that makes fishing fun. Take some greenhorns if you need a refresher course, from far-removed places like Lubbock. Just take it slow.