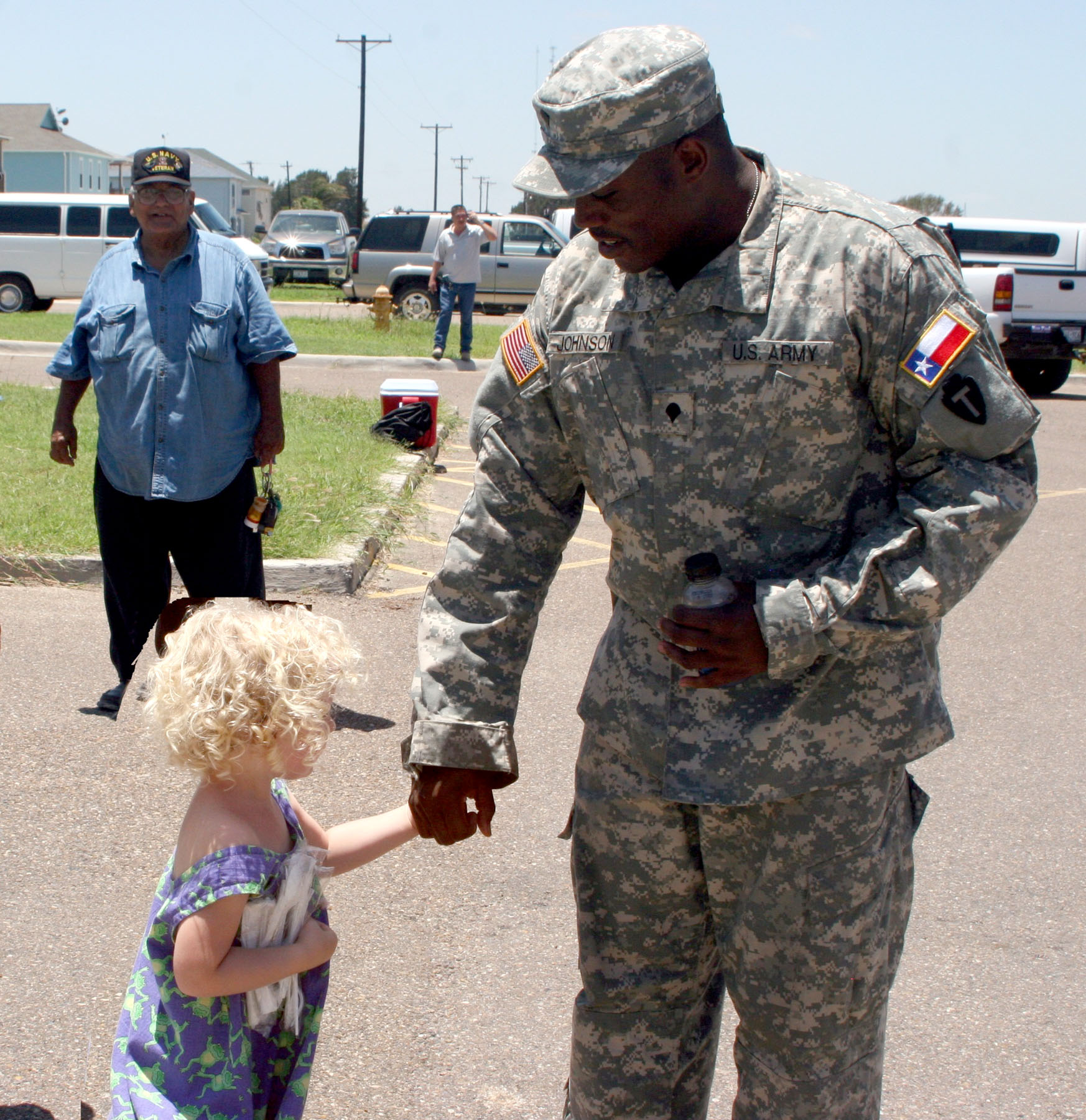 The real story here is about people… not a storm.

The Creator works in mysterious ways, sometimes in violent whirling winds we mortals can't first appreciate. Hurricane Dolly was indeed a part of the master plan, and the effects from her, despite the obvious damage and disruption, were in realitynot all bad.

The mechanical VHF voice crackled the message over and over "On the forecast track, the center of Dolly will be along the Texas coast near the Texas-Mexico border around mid-day Wednesday. Maximum sustained winds are near 80-miles per hour with higher gusts."

Most here dismissed Tuesday's statement as rather boring, even snickering at some of the alarmists already pulling boats. Time-salted perceptions of crying wolf prevailed, and I was one of many subscribing to the no-worse-than-a-bad-norther comparison. Sixty mph winds are not uncommon during northers. So; no big deal, right?

Even so, we went grudgingly through the usually unnecessary process; battening all that could blow away, tying our boats high in their slips, making sure fuel tanks and refrigerators were filled and batteries fully charged. The prudent prepare, as even with all the high-tech weather tools, the best of the best will never be able to predict Mother Nature with certainty. Sure enough, Wednesday morning's National Weather Service update created a new level of anticipation.

"The eye of Hurricane Dolly will be crossing the southern Texas coast in a couple of hours. Maximum sustained winds will remain near 100 mph with higher gusts. Dolly is a Category-2 hurricane on the Saffir-Simpson Scale."

Uh-Oh At the last minute Miss Dolly decided she really did want to dance. She picked up her skirt to Cat 2 and waltzed northward toward the Arroyo Colorado.

The full brunt of Dolly was whirling straight toward the hamlet of Port Mansfield. People scrambled for last minute preparations. Some ran in and out comparing Channel 5's radar and live coverage with reality, until thrashing palm fronds turned into flying tin, shingles, and a host of other projectiles. It became obvious that Dolly was going to deliver her best performance, even if just to remind us of what we have been missing.

The power went down with an agonizing groan, completing the ominous setting that would last from noon until well after midnight. Flashlights flickered while walls and windows sagged against the wolf that actually came. Not much to do but wait, experience the experience, and quietly hope one of the huffs or puffs didn't blow your house down.

The sun finally rose to reveal a gnarled and surreal landscape. The integrity of every structure had been tested and those that failed rested in awkward heaps like broken bones. Most houses with composition shingles had significant damage while sturdier metal roofs held. Power lines lay across streets with twisted trees on top. The piers south of town had been wiped out and the bay bobbed full of pilings and planking as far as you could see. Bennie's Shack, the iconic landmark of West Bay, finally ran out of borrowed time. However, despite all the damage, Port Mansfield's residents made it through with no serious injuries or loss of life. And luckily, we were spared the floods that engulfed other communities to our south.

As in any natural disaster, it takes a little time for people to analyze and react. By afternoon however, those who stayed had mobilized, and impressive amounts of debris were already stacking along curbs. A general feeling of camaraderie emerged and even people who didn't particularly like each other were now waving more than fingers. The best in people comes out during the worst of times; and the people are the real story here, not the storm.

Without electricity, folks adapted as well as they had means. Some were quite creative, but there swiftly evolved two classes of citizens; those with generators and those without.

With heavy flooding farther south, plus an estimated 400,000 without power in more populated areas, forty-odd downed power poles between us and Raymondville made relief seem distant. Opinions circulated of ten more days of caveman living. We forget how dependant we are on electrical power, and we also forget the power of people forged together by calamity. As soon as personal situations seemed secure, volunteerism became the new agenda.

Most who were able set about assessing needs of others and shared what they had or ferreted up what they didn't. Water and ice were immediate priorities and propane took on the status of vapor from the gods. Fuel became even more precious for those with generators; even more so for those who had not filled vehicles beforehand. The nearest source was miles away and required patience in long, sweltering lines.

The Navigation District was diligent to maintain water pressure after a short outage. Sweat, mosquito dope, gas and grease were constant companions and cold showers became a luxury in removing the day's filth from exhausted bodies.

Several business owners immediately stood up. Pelican's Pub merged with Fisherman's Inn to provided grilled goods on the back deck, making quick use of thawing meat for those craving a hot meal. Harbor Bait and Tackle performed yeoman service staying open to provide badly needed commodities through wind, sideways rain, and Dolly's dark of night. The Chamber of Commerce pavilion became the epicenter for local volunteers. It is a strong statement, good or bad, that in every human scenario, the volunteers always seem to be the same ones.

The first day or so we seemed isolated from the world. Then the workings of a great society became evident as eighteen-wheelers packed with ice and water arrived. King or pauper, you moved through the outstretched arms of volunteers with humble smiles and gratitude. When those all too often unsung heroes pulled in, the Texas National Guard, the feeling of belonging to a bigger picture was good. "Heater Meals" were passed out by the case, as were personal hygiene packets, sanitizing bleach, mosquito repellant and tarps. Appreciatively, the town gave back.

Both the Sunset House and Fishermen's Hotel opened their doors free of charge for the soldiers. No electricity of course, but more hospitable than the elements many had already endured for days. Local fishermen donated impressive pounds of fish, and other selfless locals fired the fryers to feed the entire deployment and every other hungry soul in the line.

For six days generators chugged, chainsaws ripped, and sweaty volunteers persisted. Those who needed help got it. The Salvation Army provided over 2000 meals and local teenagers sweated behind the serving bar. Once dispatched, power company crews flooded US-77. In another country, south Texas may have been down for months, but trucks and crews from as far away as Arkansas came to our rescue. They made quick work of what seemed impossible in heat-stroke temperatures and hordes of merciless mosquitoes. Heroes all, on the sixth night they threw the switches and power was restored.

Sure, there are lasting effects following any such storm, but as an opinion, many of the effects of Dolly will be for the better. Things needing to be done had an excuse to get done, and were. The town is pruned and washed clean, and the community did some badly needed bonding. The rebuild will be stronger and preparations will be better. The ecosystem welcomed a needed flushing, and historically, fishing improves dramatically following these events.

Most of all, faith was restored that people are inherently good. It's a shame that we often need reasons to confirm this, but Dolly gave us one. As for Port Mansfield, the lights are on and the future is bright. Thanks to all! Here's to a calm, and hopefully better prepared, September.