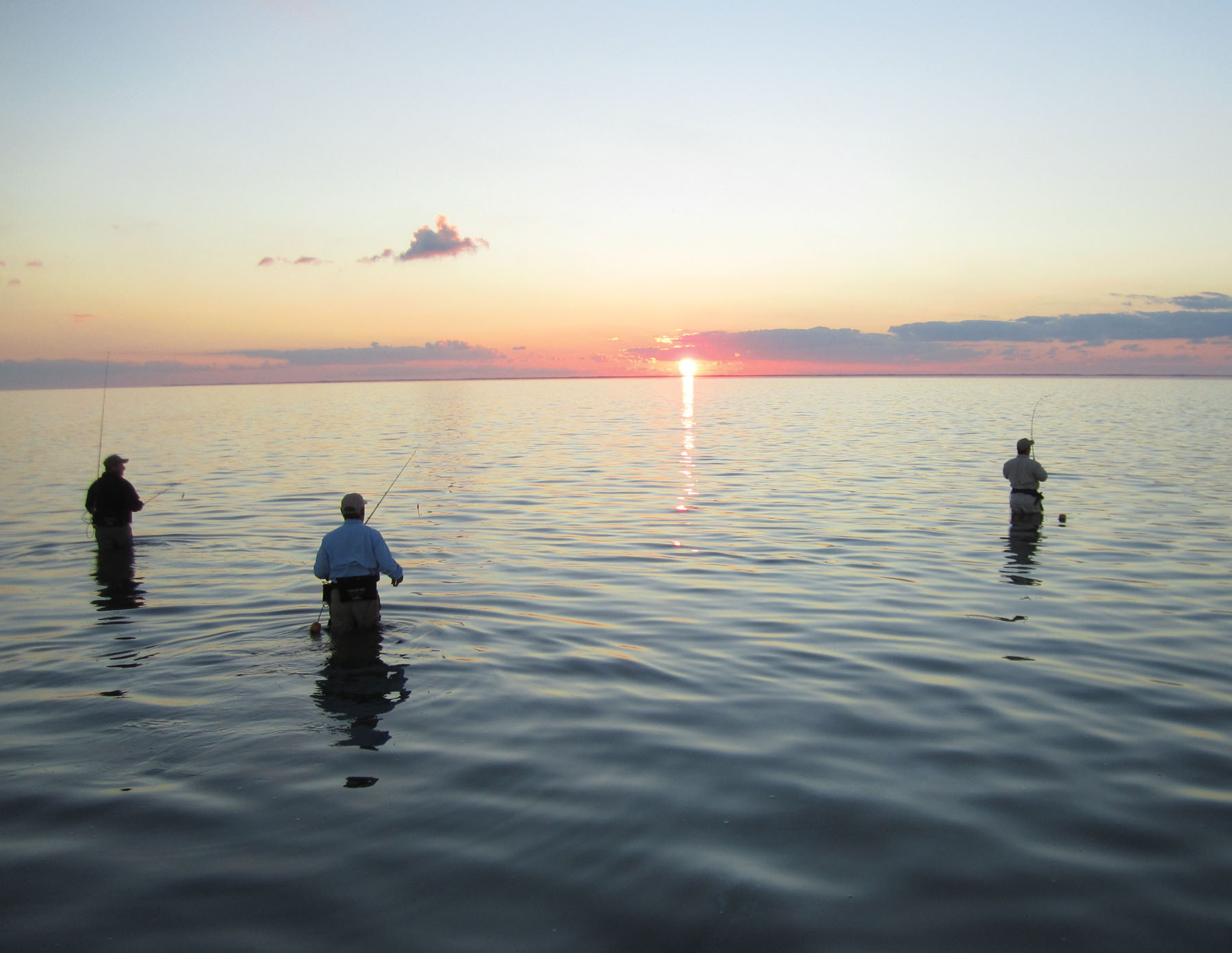 When you have a scene such as this unfolding the last thing you want to hear is a boat idling into “your space” – but it happens.

There must be something peculiar in the salt air we breathe, some bizarre element that becomes a catalyst for socially strange behavior. The closer we get to the water the more the rules of acceptable conduct seem to change. Each little coastal community becomes its own unique cartoon strip full of crusty characters, all variously afflicted by this inhaled phenomenon.

Sailboat people, for example, are certainly a "knotty" bunch, wearing funny clothes and speaking in port or starboard, even on land. This kayak craze has little folks challenging bigger ones for exclusive rights of divine access. Fly fishermen can be like righteous cave men at times, adamant in their rejection the wheel. Surfers don't own shoes and commercial fishermen are not fond of them, yet wouldn't flinch at wearing a new pair of white rubber boots to a wedding. Yet of all these saltwater "enthusiasts" the bay boaters may have absorbed the greatest share of this mysterious and conduct-altering component.

Spring is upon us again and so is the next round of prop sparring. Shakespeare must have launched a bay boat in March when he said, "Hell is empty and all the devils are here."

Years ago I wrote a piece I called Combat Fishing and since then the bays have shrunk even more - Combat II may be due. Let's first try to identify some common socially-deficient actions on the water, then perhaps look for new ways to hold onto our sanity on the battlefield.

One of my first "equipped" adventures came courtesy of a neighbor's hot older sister, cramped into a VW bug with beater boards sticking out the window. Wanting to avoid any other human intervention, she drove us two hours down the beach to experience this new utopia as close to God's pre-apple Eden as possible. It was utopia…for about 2 hours. Then an apparition appeared on the horizon, a dot growing larger. The socially unspeakable soon happened to our private planet of unspoiled sand.

A rusty car wheezed to a squeaky halt under the weight of seven souls, and within 50 feet, out flew folding chairs, tables, dining canopies and a corroded BBQ pit. Paradise was lost, and so was the rest of our hot dog mustard, Kool-Aid cups and toilet paper. Their 8-track player drowned out not only the surf but squawking seagulls rummaging through a growing pile of chicken bones and diapers. The worst part was that the "sister" had to put her bikini top back on.

I thought surely it was a fluke, an isolated and ignorant lack of etiquette. Unfortunately, many years on the coast suggests that same social breach can occur anywhere people breath salt air. We especially see it in fishing, more so from those in boats, and I think the Indians named them "boat people" right before they destroyed their private planet as well.

Typical of today, you can be the only boat on the bay and quietly slip over the side to wade fish amongst God's finning creatures. Then, like a seagull appearing from nowhere to scoop a potato chip tossed into thin air, within thirty seconds you are covered up with laughing opportunists. Suddenly a boat roars onto the scene, shuts down, and drifts close enough to beg a smudge of Grey Poupon. That, in my opinion, is as socially unacceptable as taking the very next urinal instead of a couple down - a total invasion of personal space.

I schtick you not, last week I was unhooking a fish when a boat suddenly ripped right between me and my party of wade fishermen, close enough to see the moisture in his eyes when I questioned his ancestry. I held my hands up in a "YMCA" position, then rotated a pointed finger around my ear signaling that he was crazy in the head.

His aloof, self-justifying reply was simply "Hey it's shallow over there."

Well then, GO AROUND…you who would suck the air out of a party. Salt induced behavior. Gotta be.

Another classic example was last fall when we were lined up on a little point in Port Mansfield's East Cut. Boat traffic was politely veering, except for one. Seeing the stringers, the infected skipper did a boomerang and then idled on in to a distance of less than 100 feet.

Hurling a large anchor in our general direction he shouted a one-word question, "Whaddaycatchinemon?"

Would that be normal behavior in non-saline society?

Then there's Capt. Tricia's newest admirers, two young guys in an itty bitty scooter, whose only game is to buzz around until they find her wading party and then ease up just out of casting range and keep pace off her hip by dropping and weighing anchor as needed. What kind of salt are they snorting?

It's getting harder to protect our little corners of Eden, but some of what we used to do worked very well. When Mark Holt and I were teaming up and winning the old Best-of-the-Best Galveston Plugger Series we would drag a boat around as a decoy, but at "launch time" we would hide it and just walk in to one of honeyholes. At San Luis Pass we would tie on Budweiser beer can lures before we pulled our stringers onto the sand, then chuckle when we saw them mentioned in the local fishing rag a week later.

Speaking of diversions, another tournament heavy, Mark Trevino, would "dress up" for pre-fishing, in a borrowed a boat festooned with thick rods and popping corks and spark plugs, with his hat backwards like Cheech's dead-bait-chunking cousin. That worked too.

Other fun was when we knew we were going to get potlicked, and all just sit down in the water when we heard the offenders approach. We'd stand up at the last minute in shin deep water to enjoy the bizarre display of evasive boat driving.

A lot of things used to work, but rarely as well as they once did with this new breed of water bullies that'll rip you off in a heartbeat rather than develop intel of their own. Fortunately we have better tools now, and technology can often transcend genetic failures and salt air exposure. Photoshop is worthy weapon, and its fun dropping windmills into the backgrounds of big fish photos, right next to the grove of yuccas we just planted.

Disrespectors HHof traditional moral values, such as Mom, apple pie and personal space on the water, come in two sizes nowadays - amateur and pro. Some new tournament hopefuls can be among the worst offenders and seem to get a delicious kick out of profiting off the efforts of others. With tournaments on most summer Fridays and virtually all Saturdays, it's like fishing on Yuppie Bay with $70K top drives, poling platforms, Power Poles, and trolling motors dominating. Include a 40-foot rooster tail behind a 70-mph rocket boat and we often find brains directly proportionate to how fast and shallow a boat can run, not to mention that the bigger, faster and fancier the rig the more some folks feel entitled to encroach upon schools of fish others have worked hard to find. A time honored ruse is to use humans against humans, for Hell has two large gates: lust and greed. That's where social media, like the new gossip fence Facebook, comes into play. One or two posts can easily send the masses where you want them.

Little is sacred in today's relentless quest for easy information, but a proper ending would be to help the drug induced understand that a GPS can just as easily just make you dumber, and chasing other boats like a loose pinball is little more than a Tour de Farce. Contempt can curl like smoke, but don't let emotions ruin your paradise. We need to learn to either outmaneuver, or play Jeopardy and take "I'm an invaded moron" for $200.

It's the salt air I tell ya…but this is nothing new in fishing and here's a telling quote.

"But now the sport is marred, and why you ask? Fishes decrease, and fishers multiply." Thomas Bastard - 1598!

I wonder if he launched with Shakespeare.