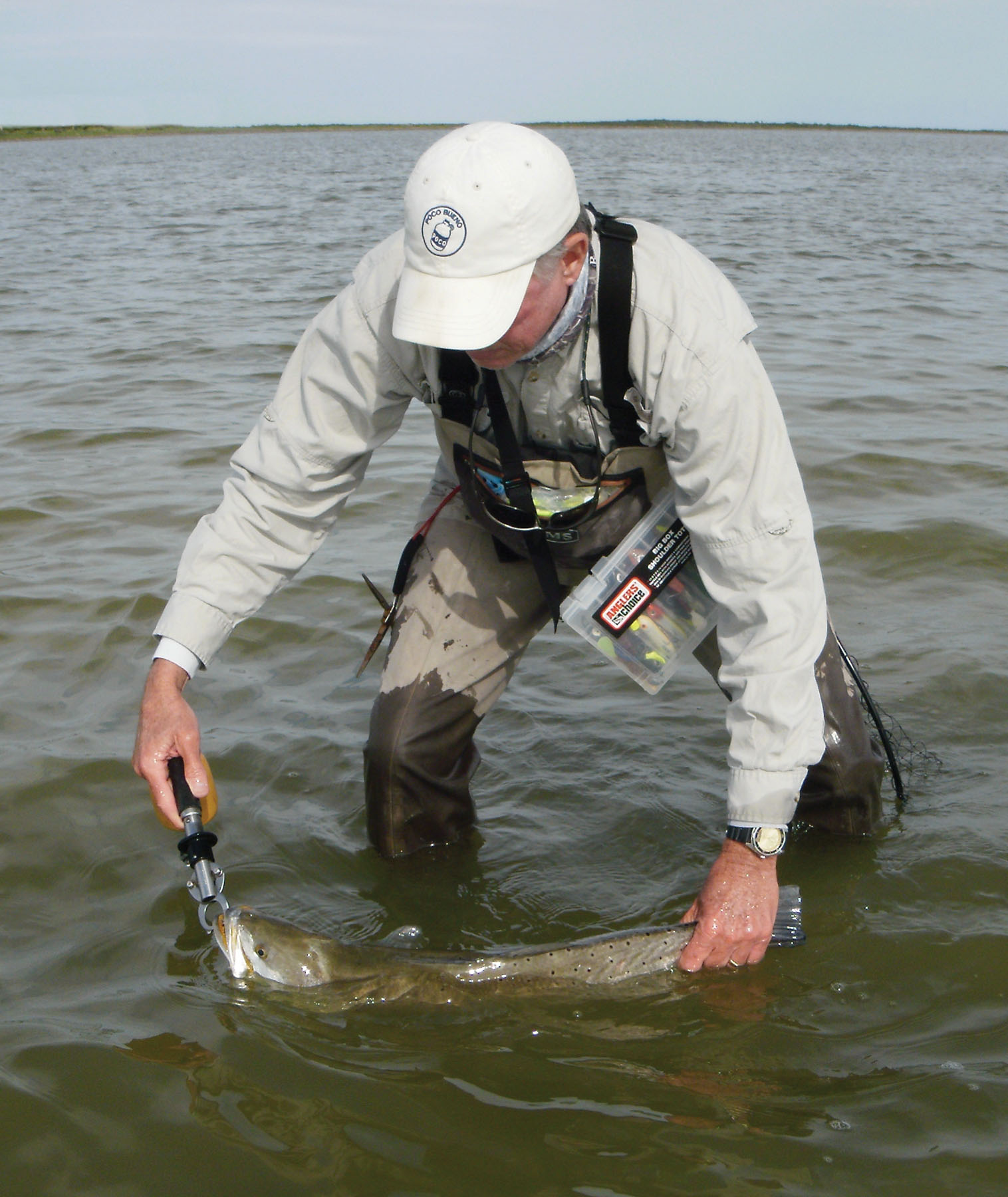 It's interesting how some of the little things we learn while fishing can grow into much bigger things. It's also interesting that some of our greatest revelations come by pure accident. One small discovery can become a little maxim of instruction and might even dramatically change our whole fishing philosophy. It is spring and it looks like it's going to be another good one, and thinking back on it all, I can well remember one of those particular lessons that might help point me towards where I want to be tomorrow - and that would be in the highest potential area I can find for upper-class fish. We might learn by accident, or we can learn on purpose, either way what we are hoping to learn is finding and catching better fish in areas where they are not "supposed" to be - that is, if you buy into so-called "popular" fishing logic.

One particular spring wade, many years ago in Galveston's West Bay, Mother Nature urgently suggested a little side-trip to the bank. It had been a classic waist-deep morning, throwing topwaters over two to three pounders aggressively harassing balls of mullet riding an outgoing tide. Back then the only topwater to throw was a Rebel Jumpin' Minnow, a truly deadly lure in original form but unfortunately far different from what is on the racks today. While doing a quickie two-step towards the shoreline I pitched the originally black-backed, silver-sided lure, that had that time been wracked and ravaged into a solid bone color, right on the bank next to some flooded cord grass. I stopped to adjust the brakes, (back then we had to take the reel apart) and seconds later I heard a flush and looked up to learn the plug had vanished. Scrambling to put the reel back together, a six-pound trout ended up being on the end of that slack line. It was a light bulb moment and further investigation would be in order, but at that precise moment that urgent nature call was still calling.

Relieved, literally, to be back in the water, I stayed close to the bank this time and tried for a repeat. Sure enough, by letting that plug just basically sit and rock in the waves, it got nailed twice more within an hour by fish twice the size of those we had been catching. That session was one of the first to start an insatiable drive to find, and catch, better fish shallower than I had ever caught before.

Over the years fish have shown up in many other shallower-than-expected areas, but we wouldn't find many of them if we don't have the confidence to look. As opposed to happily banging on sure-thing three-pounders, this type of fishing is much more deliberate. Most of us have played pool to some capacity, and fishing the extreme shallows looking for a few good bites is the difference between hitting hard and hoping, or calling precise shots made with a dab of English. Man started out fishing for food, now men fish mostly for challenge. Here are a few more examples that might encourage some searching this spring.

During one of those typical, pre-programmed marches out to beyond the beachfront breakers, somebody pitched a MirrOlure into the first bit of water lapping the shore. Right there, in that first little swale next to the sand, a big trout suddenly came out of nowhere and to our collective amazement nailed that plug with a frothy vengeance. From then on, while most other "enthusiasts" automatically waded up to their fool necks for those three pounders, we would catch bigger fish almost every time the conditions allowed by standing on dry sand twitching a 7M floater. Shallow themes kept re-emerging, and this was another precision "bank shot" if you will.

San Luis Pass brought yet more confirming evidence. Most folks fish the deeper drops along its many bars and guts. However, the larger fish we all covet can often be behind us. During one of the earlier Troutmasters, I got lucky and won by standing a little more than bootie deep and letting a clear Corky bounce along an incoming tide barely six inches deeper than where I was standing. It was a large, very shallow flat, but the current will cut small arteries through most of them, and this one was full of big bull glass minnows. Better trout were just sitting on the bottom facing into the current, basically being spoon-fed by the flow. Three of those bigger "snackers" found hooks in their morsels and made me proud at the scales.

Down here in the Laguna Madre, but certainly not just exclusively here, there can be miles of shallow sand behind the grass lines with all sorts of interesting little humps, bumps and fish hiding swales. I have really enjoyed our "Ask the Pro" Jay Watkins being down here this winter, and during one of our many talks (if you can call it that, as you really don't talk to Jay, you listen), he said he guesses our fish just live shallow. I think they do most everywhere else too, it's just that we miss a lot of them. With our Lower Laguna fishery being as healthy as it is, we can see more of what they do because we just flat out have so many to see, and we often see them where they - "not supposed to be" according to all that widely subscribed expert fishing logic.

A prime example occurred last August 21 and, was purely an accidental experience. Taking a shortcut to get a client on a homebound flight at 2:00 PM, under a blazing sun and with only an occasional puff of a breeze, we ran across two hundred yards literally stacked full of upper-class trout just sitting there in about a foot of crystal clear water.

According to the Garmin, the water temp was 93.6°F, and that goes against most everything we have been "trained" to believe. So let's quit reading and believing all that so-called expert stuff about how fish always do this or do that - like going deep in bright sunlight because they have no eyelids, or that silly-magical 70° water thing.

These days we all seem to be looking for better places to hide - humans trying to hide from other humans and fish trying to hide from all sorts of opportunistic predators, some of which are human. Getting up way shallow can qualify, and a big bonus is a much reduced chance of getting run over by other boats. Big fish, often many big fish, can be found lying just about anywhere at anytime, but the "why" is often where our understanding stops. Sometimes we find them where there is not a stick of bait to be seen, which only adds to the mystery. We just have to be willing to look, and often that means walking away from a sure thing.

Stalking fish like this is really not much different than a bow hunter who can spend all day waiting to draw on that one opportunity, but here we can draw and release many more times throughout the day. It's slowing down and fishing at an economical pace, absorbing and enjoying all of nature around us. Pretty cool stuff unless we're just looking for a fish fry, and hey, that's cool too! But there just might be more worthy and exciting things to look for.