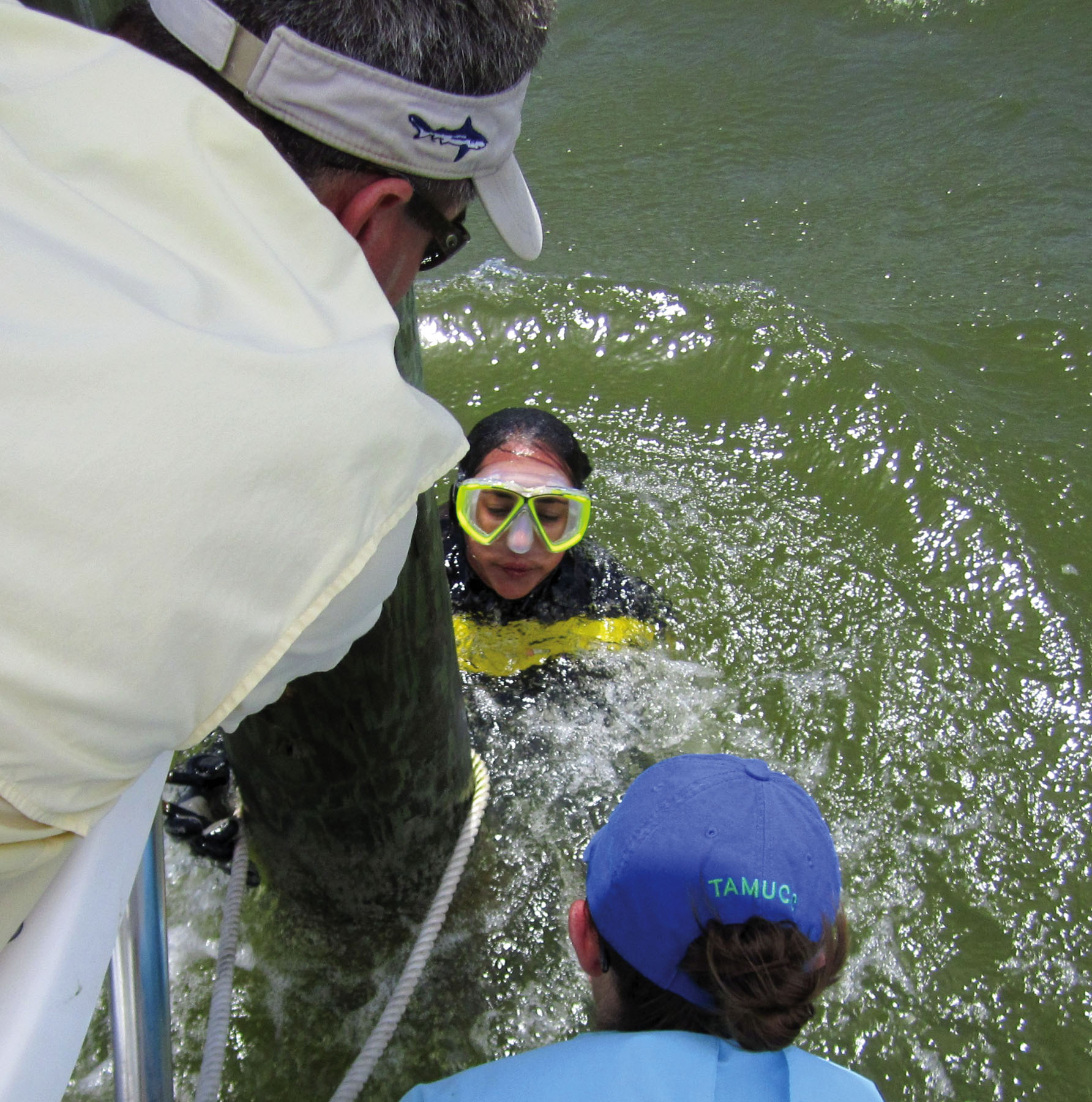 Laura fighting strong East Cut current to retrieve transceivers.
Apart from largemouth bass, there may be no finned species that has fueled more theory and so-called expert opinion than our own topwater crashing, Corky-eating speckled trout. We all crave information and continually search for every tidbit that might lead us to bigger and better catches. Yet, unfortunately, I doubt seriously whether the fish would agree with a lot of the stuff that has been peddled as gospel over the years. Much of what we think we know can be classified as either old school myth, media hype designed to encourage retail sales, or perhaps colorfully embellished (but highly entertaining) guide talk. We have never really had much in the way of hard data to work with. But never fear; Dr. Greg Stunz and crew are here to finally set a few things straight.

As I mentioned in the February 2010 issue of TSFM, Dr. Stunz and team from TAMU Corpus Christi are committed to unraveling some of the mystery. They have help from the Harte Research Institute, CCA Texas, and the Rotary Club of Corpus Christi (Harvey Weil Sportsman Conservationist Award). Their main goal for now is to either confirm or disprove the tide runner theory, one of the most debated issues concerning spotted seatrout movement and migration ever put forth.

Basically, just about everybody, except the scientific community, believes that a large population of trout migrate from the Gulf of Mexico to the bays each spring and then retreat back as winter approaches. This new endeavor is actually the work of Masters student, Laura Bivins. Her thesis is officially titled: Large-scale movement patterns of spotted seatrout (Cynoscion nebulosus) among South Texas estuaries and the Gulf of Mexico. Besides Stunz, Laura is also well-assisted by topwater chunking Fisheries Research Coordinator, Megan Robillard. Although the study is still quite young, the data received thus far has been very revealing. I recently got to go back into the water with this bunch and fascinating would be a weak description.

We had a great day on the water with the goal of obtaining additional trout for tissue analysis research, and more importantly, to retrieve data from electronic transceivers placed in Port Mansfield's East Cut back in February. To recap briefly, a number of trout have been fitted with transmitters to track movement. When a tagged fish swims within range of a transceiver, data is recorded including the fish's ID, time and date stamp, along with other valuable information. Movements can now be tracked without question. So with no further ado, here is some of the information received to date, surely to change some of the older thought we have relied on.

Number one the rate of data return is already well off the chart of expectation. In a traditional tagging program (where dart tags or similar devices are used), a modest 4-6% information return is normally expected. Laura explained that results in this type of study are heavily dependent on angler success and reports to verify recapture. However, with the new sender/transceiver technology, an astonishing 65% of the electronically tagged fish have already reported back. This is stunning; especially when we might fully consider the abuse and stress some of these fish have endured.

From a total population of sixty-two fish carrying surgically implanted sending units, twenty were obtained from the Baffin Bash live-weigh and release fishing tournaments earlier this year. Incredibly, of that twenty, thirteen are still talking to us. These fish were initially caught by tourney anglers, kept alive and transported to the weigh-in in livewells, weighed, underwent surgery to implant a transmitter the size of a small topwater, and then transported again to a release point near Pita Island outside Flour Bluff. We have all repeatedly heard speculation that releasing a trout is silly and for naught, as the stress of capture and handling alone will surely kill them. So much for anecdotal theory. We are now clearly seeing that post-capture survival is far greater than many would have had us believe, at least in colder water.

Of these tournament trout, some of the movement tracks they have left have been off the chart as well. One fish was shown to have moved fifty-six miles in a fourteen week period, and yet another traveled an astonishing sixty-nine miles in just a little over nine weeks. Another moved thirty-five miles in just two weeks. This is huge considering that most, if not all previous scientific studies, have concluded that the majority of trout live and die within five miles of the spawning site.

Here are a few more detailed descriptions of individual fish trackings. (If we routinely chase trout believing we're on 'em for tomorrow; we may need to think again!) One fish in particular, released near Pita Island, hung around for a while, swam nine miles south, only to return to Pita Island in just nine short hours. It later moved all the way into Corpus Christi Bay, and then returned once again to Pita! This fish moved at least thirty-five miles between April 6 and April 22, with the last electronic detection being recorded thirteen miles from the tagging location. It was ultimately recaptured on June 19 within a mile and a half of the original capture location. In a typical dart tagging study, the likely conclusion would have been that this fish had barely moved at all. Now we know the rest of the story.

Of the non-tournament fish tagged with transmitters, (forty-two total), an almost unbelievable number of thirty have reported back; an incredible 76% survival rate just from the data received so far.

On a sad note, nine of the electronically tagged fish have shown up at cleaning tables. At least the anglers had the good sense to report them. Still it amazes me that anybody could fail to notice the bright green dart streamer in the dorsal fin carrying the message Internal Tag, Please Release. Not only are these transmitters expensive; the information they will ultimately provide is priceless. If you happen to catch one of these study fish, please release it and call the number on the tag to report it. Laura and crew will send you a very nice care package, promise, and you can also be proud to have been part of this historic scientific effort.

Yes, data is also being received for the original purpose of the study, showing movement from surf to bay. Ten of twelve fish tagged in the surf moved inshore through two passes, and this at least proves in part that some amount of exchange does exist between the Gulf of Mexico and bay waters. Time will eventually tell more, which is certain to benefit all of us.

What we have learned so far is that trout are much heartier that many might have suspected. Perhaps that "one over 25-inches" regulation is not as silly as many thought when it was implemented. We have also learned that trout don't always just stick around their original home place, and for whatever reason, can and will move more than normally imagined. We will eventually learn more, but in the meantime, we can certainly enjoy what we are already seeing thanks to this team of dedicated scientists who are also passionate fishermen.

Technology is a wonderful thing when used correctly, so let's help these folks as they strive to improve the future of our fishery. Big kudos go out to Thomas Petroleum-Speedy Stop Stores for continuing the Baffin Bash format. When the late Tom Nix first announced a live-weigh trout tournament the masses scoffed, called it nuts and a total joke. Now it is paying off with data we can believe in, and I sure wish he could be here to see it.