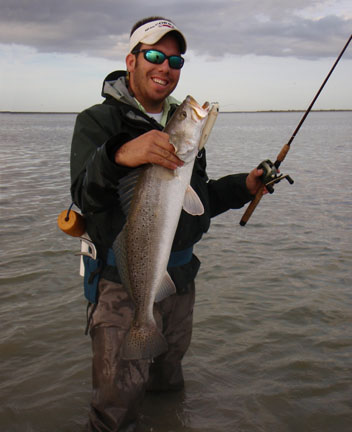 Brandon Saenz with one of many quality fish landed shallow with topwaters.
"Nah, probably just another six, haven't turned her yet though, and she's still pulling some serious drag. Doesn't really matter, coolest part was how she slammed the plug...came right on the pause just like all the rest."

That was me talking over my shoulder to Brandon Saenz. Jeff and Nathan were both leaning back against good fish; Capt. Tricia's people were staying busy; John Gill's group hadn't moved fifty yards all morning and by the look of things they'd been cutting loose some real hosses. Awesome, just absolutely awesome.

Brandon and I were knee deep just yards apart, immersed in a scene that could have easily been torn from a dime novel. Sticking trout all morning, longer than the water is deep, is nothing short of fantasy for many; especially with topwaters, and even more especially when that is the very fuel required for stoking personal fires.

Our rear guard position made great seats for the show playing out front. Everyone in sight was seasoned, respected, and respectful, making the sharing of all of it not only easy but an inspiring pleasure as well. That is as it should be, but there is also much more we all need to share. Whether it will be inspiration or pleasure will probably vary depending on our rank in the primate tree, but first let's turn back to that fantasy scene for just a moment.

Brandon and his crew of up-and-coming anglers experienced what drives many of us to keep leaving chores behind and launching, even in ridiculous weather conditions. We all hope that during one of those trips
everything will come together and our fantasy will go live. This session might as well have been scripted. Two days after a norther and under the magical influence of a full moon; large trout moved up to bask in the comfort of warming potholes on a skinny flat. We knew they were there and vulnerable, so we would fan cast with full-sized topwaters, then step up ten feet and repeat. It took fully two hours for us to move seventy-five yards and I think the total count was twelve over six with a couple of sevens and one eight. Yes, awesome by most standards, but that is only the spark of what this story is intended to relay.

Here's the deeper deal. No, they are not jumping in the boat, but if you know what you are doing, sessions like this have been uncommonly consistent since early September, many were even better. The bottom line is that trout fishing here has literally exploded here in the lower Laguna. And I'm not talking about your average trout either; we are chock full of fat, high-quality fish between five and seven pounds. That class of "over twenty inch" trout that went mysteriously missing a while back apparently now thrive. It's better than I've seen in any bay for many years and excitement runs high. I pretend to know nothing, but I do know what my camera sees. The most consuming question in all this is WHY?

Could it be a natural rebound cycle? That could certainly be possible, but only to an extent. We've seen rebounds following freezes and currently several theories are running rampant, including storm-driven rejuvenation and such. However, one dramatically visible change is that there is simply nobody here, hasn't been all year. Overall participation has dropped significantly. Some estimate forty percent while at least one local warden placed it closer to sixty earlier in the year. For whatever reason, and reason would suggest a combination of factors, be it earlier fuel prices, an uncertain economy, travel distance, or perhaps in part the newness of being the only area where the limit was halved, the traditional "baskets upon baskets" of fish ceased to stink up the docks. Regardless, it would be hard for anyone to discount that such an extreme drop in pressure cannot help but play a role in what we are now enjoying. Honestly, most of us thought we would never see this again.

I realize that writing this is not in my best interest; and it's probably not for any other fishermen who love this area either. The absolute last thing a rebound needs is a flood of people determined to knock it right back down. Please don't go there. This is not intended to "market spin" this area. It's simply intended to share an observation and encourage thought towards determining a causewith the hopeful goal of duplicating it elsewhere. Some of y'all a little farther north might genuinely want to wade a bit deeper between some of these lines.

I read Jay Watkins article last month and if you didn't you should. When professionals of his caliber take the time, even at potential financial risk, to voice concerns in print about alarming trends they have been seeing, we just might want to listen. "We" includes those charged with the helm who often discount our observations as fishermen to be merely anecdotal and therefore of little value. If Jay and his people are struggling for the numbers of quality trout that has earned him coastwide renown, chances are great that they are simply not there for others at the previously enjoyed levels.

All I can truthfully observe is that our similar struggle for minimum inches has measurably and rapidly changed. Some of you may be where we were, but now we are spending all of our time trying to catch them instead of just trying to find them. Not only will the weight of five fish here now rival most ten fish strings in other areas, they will darn sure blow bigger holes in the water.

So what does all of this imply? No question we are all going to see some major shifts as time goes on, as surely as the coming wrath of God. That is normal, as historically, in every civilized society, its mere existence depended on changing things that weren't productive into things that were. We need to decide for ourselves what is, or what is not, productive. What do we want, what will it take? But more importantly, what are we willing to do to make what happened here happen elsewhere? Dinks or donks?

I know what I want, and sitting here on a stupid computer writing this is not letting me do that... or is it? See you there.