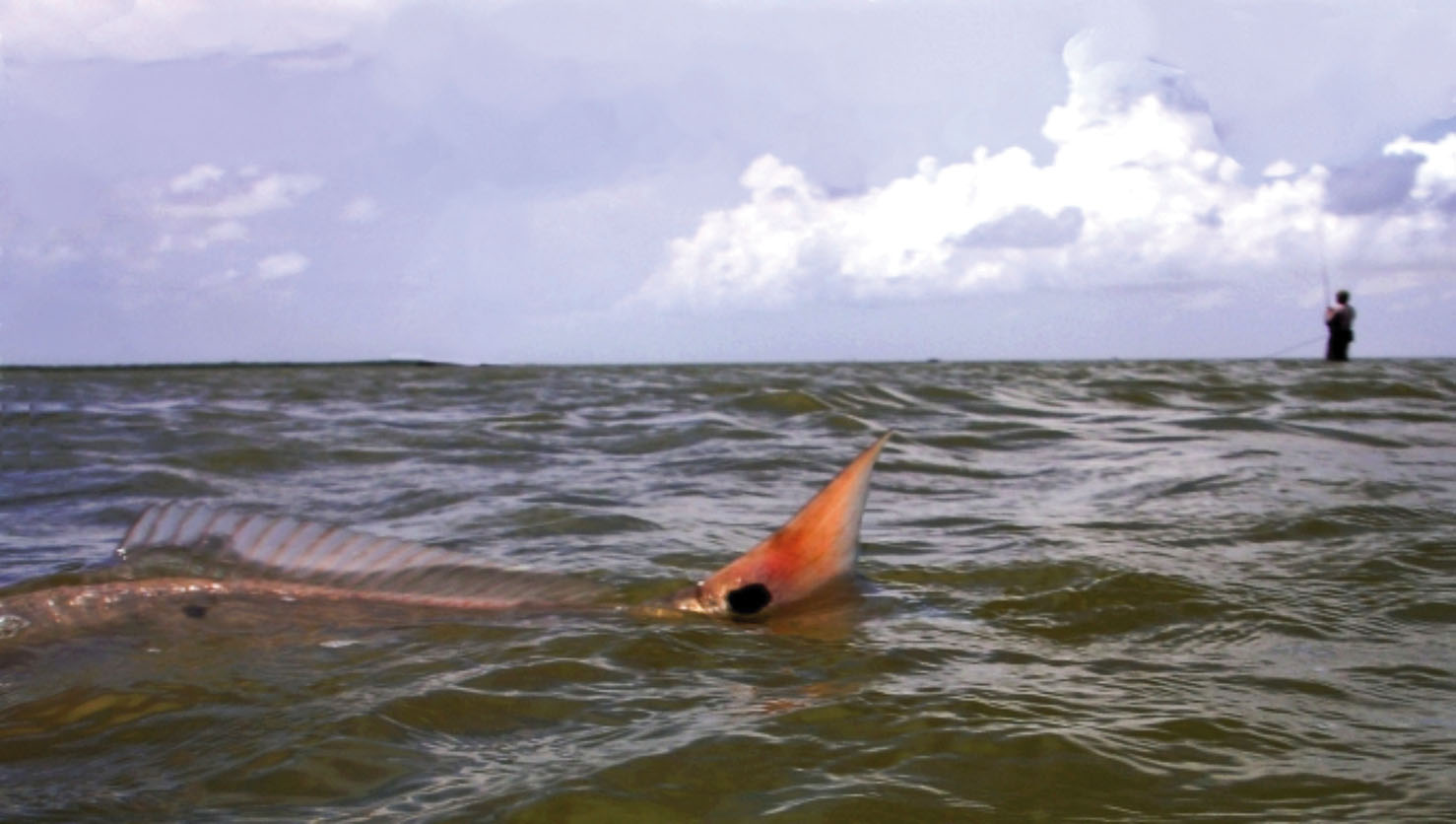 I'm sure anyone who has fished long enough has seen a ghost or two. By ghosts I mean black-backed silvery creatures with a bunch of spots on them. Watery apparitions so large nobody would believe, unless perhaps a paranormal-type hippie or "otherwise induced" person. I have witnessed a few such shadowy illusions, and once upon a recent time I actually got to touch one with a hook.

It's the haunting of the still unproven, save for a few disappointingly fuzzy images. For some of us it's enough to keep us zipping those booties up, and of course everybody has their own personal vision of what fishing is supposed to be about. Some are motivated largely by the fried meat aspect while others focus on adventure. I guess I lean more toward the mysteriousness of it.

I basically use fishing as a socially acceptable excuse to try and make better sense of this world we occupy for such a short time. So just for the fun of it, here is the tale of one such encounter, though the only sense it might make pertains to one of those goals strived for and never actually meant to be met.

In shortI got canceled. I understand that living somewhere near "Hootersville" (as Jay Watkins would say) can present logistical problems for clients but, eight hours qualifies as quite short, no matter where you are. We take it in stride though; a full-time guide learns to live fast, love hard, and pull off a few practical jokes in-between. Being that I was on some big fish I figured I'd just go anyway. And hopefully send a few of those "shoulda been here" pics to the cancelling dude ranchers, the kind who take their clothes to the cleaner way too often instead of getting them really good and dirty.

I had seen this particularly huge carton of a fish three times in about the same number of weeks and was curious if the post-norther conditions would lend to me seeing her again. She was always in the same basic area, right on the edge of a small shallow bar, conveniently tucked behind some life-sucking mud, yet very close to a quick deeper-water vanishing act. Curious is that the area lay hard against a heavily traveled boat lane.

The sun had climbed enough for decent visibility and the other boats were by then a far distant roar. It was relatively warm for January but chill enough for steam to rise from the wake I laid in colder water. I stayed on plane as far as I dared hoping to cheat at least some of the mud. Ridiculously shallow, the tabs went down as the jack plate went up to help the Haynie run flatter, like a duck cupping into decoys.

I waited for the prop wash to settle and then started to slip into my waders with one more critical decision. On which foot do I put on the only sock I managed to bring? Just for luck, I pulled the cotton up on the right. The left struggled for comfort in cold, mildewy neoprene but comfort wasn't what I was after.

I glassed the area with some seriously beat up binoculars, but hey, you have what you have. Through the foggy left lens and crooked right glass I watched several great blue herons dancing for their lunch. Even more promising a couple of pelicans floated amid occasional tell-tale mullet flips. In my mind; if the baitfish had pulled back up, hopefully a few predators wouldn't be far behind, one in particular. My protected foot slipped into the water first, ballerina style, and the shuffle towards the sweet spot commenced.

It wasn't a quiet shuffle. There was still plenty of lung sucking yardage left, and despite trying to be stealthy I got into a fight with a flattened crab trap. It was cleverly disguised as a grass bed and that stupid little hook meant to hold your Montana gravel guards to your boot laces tangled in the mesh. Occasional redfish boils said to keep going, you may get her yet. I was almost there but already calling that fish a bad female name for doing this to me.

Sure enough, about a half cast away, a watery mirage took shape, slowly turning from parallel to point. She seemed to be staring right at me with that "So what do you think you're going to do about it?" look. A sick feeling deep in the throat and visions of certified scales made me want to lunge, snag, just do whatever it took to confirm this Loch Ness illusion.

I hastily made a big cast with a small plastic. Of course she revolted, but of all things, went even shallower. She spun around almost on the bank just to sit there and stare at me again. Emotions can run wild, like wanting to throw your golf club, and then suddenly the only link to the real world doused even more cold water on the situation.

The freaking phone rang talk about a buzz kill!

I turned the stupid human thing off, wiped the stress sweat from my brow and glasses, and fumbled for a non-existent lure that might bring Nessie home. I had that much time. She wasn't going anywhere and neither was I.

I slowly circled, making calculated shots, about one per minute I guess. By now she seemed used to me, evidently written me off as harmless. She didn't even spook on a bad cast. I changed lures several times, my mind racing, if only I'd brought this or that. Yeah, it was like throwing at a ghost. Am I really seeing this?

Minutes passed like hours. A fine drizzle developed and turned wet enough to pull up the hood and tuck the stupid phone. An increasing east wind under low sky broke up the surface, but also my visibility. With nothing to do but wait and hope, I did a bunch of both. When the drizzle finally cleared that ghost of epic proportion was gone. The horror!

I wanted to throw the club again but figured I'd just have to settle for some of those "other fish" I'd seen, on the way back to the boat. I put a loop knot on a new Corky Fat Boy and trudged out a little deeper towards the tendon-pulling mud.

The ghost miraculously reappeared just off the little ridge, slowly moving towards its evident escape route, perfect angle for a good shot. I took it and the lure plopped with a flat entry about four feet in front of the massive shadow.

As in yet another dream, the fish actually move up and sucked the lure down, and then just sat there. When it finally registered to snap the rod tip back, the whitewater confirmed the image was real, and that it was also real big.

I got a couple of good runs out of the beast, even got her close enough to point and shoot a nervous camera, and then both the line and I went suddenly limp. I saw her one more time, easing closer to the drop-off, once again mocking me with one of those "what are you going to do about it" deals.

My shot at immortality was gone but that particular ghost still lives. If anybody ever actually caught her we would have surely heard about it. All I had was a fuzzy photo and a sharp memory.

Morals here are several. One is that things tend to happen for a reason and this one just wasn't meant to be. Another is that just like us, animals are creatures of habit. She lives because she is programmed that way, and hiding in plain sight may be something we all should consider more often. Yet another touches back to the reasons all of us have for fishing in the first place. For me, I've never shot a buck over a kernel of corn and neither will I try to catch a ghost that way. Some say the state record will never again be broken, too much pressure these days and all that.

I disagree and I'll keep going back for my own reasons. By the way, as bad as this picture is, it still clearly shows a Corky for an accurate scale. I did several calculations, and yes, those black-backed ghosts still truly exist. Next time I'll try to remember to bring two socks.