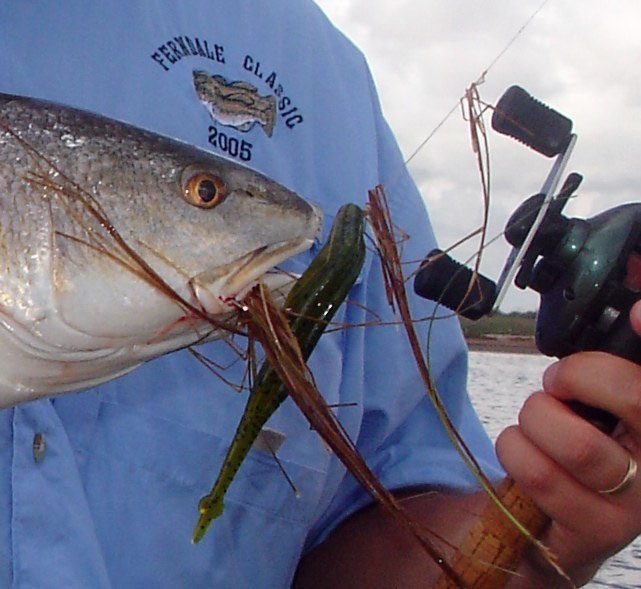 Mustad's Ultra Point Power Lock Plus hooks do a great job of getting that bait into some otherwise unfishable areas.

I 'bumped' into an interesting guy at El Jefe's the other day. El Jefe's is a restaurant down here on the harbor where fishermen like to watch the sun go down, and, as the waterfront boards would inspire it, run their heads every now and then. Anyway, while peacefully waiting by the Tiki Bar for an order to go; my shoulder gets knocked about a foot just before a bright red nose eases into my personal space. (I don't think the color was totally sun induced or at least it didn't smell like it.)

"Let me ask you something there fella," says he. "Are you one of them guides that goes fishing, or do you go catching?"

Lacking an immediate witty answer, I think I chuckled something like, "Well heck man, we go fishing, but we really try to do both."

"That's exactly what I thought," came the reply. "You're one of them! When I come down here I don't come to do no fishin'. I come here to catch, period, and I'm back at the hotel by 10 o'clock. We get 'er done."

Based on what I could decipher from the wobble of his parting shot, it was simply a fool's game to try and catch fish all day long on lures. OK- Call me a fool.

Fishing means different things to everybody I guess. For me though, throwing a fish into a box full of ice, closing the lid, and then listening to it thump around until it chills to death just isn't quite the apex experience I'm looking for while trying to enjoy the great outdoors. I don't remember Norman Rockwell ever painting a picture of that either. I have though, seen him paint a picture of a 'fool' going fishing. Even though lure fishing may not be as "productive" as other methods during certain times of the year, we continue the fool's game of 'hunting' fish with lures. For one thing, there is just no 'limit' to it, (sorry had to do that), and I continue to be inspired by trying new things. Let's look at one 'new' thing I've been trying to work on, which is trying to become a more mature angler. Ironically though, it does have to do with catching.

By 'mature,' I mean trying to fish more like the fish want me to, rather than how I want to. Even though the catching part isn't all of it, if we do want to catch, sometimes we just have to remember that the fish own the rule book.

The truth for me is that a long-term obsession with topwaters and big plugs has, in many cases, kept me from being all I can be. As awesome as that big blow-up is, using only topwaters and such when the fish don't want me to is usually quite limiting. Sure, keep banging one around and we can usually sucker some up, but getting something right in there where they are, at the speed they want it, is far more consistent.

Corkies are a full meal deal, but many times all they want is a little non-threatening tidbit. I knew it all along. So did a lot of others. One guy in particular reminded me of it, and although I didn't want to hear it, his friendly taunt continued to haunt me.

"McBride... you know you'd catch more fish on a tail."

Dammit. I know I know, but I want to eat my cake THIS way. Well, Jay Watkins was, and continues to be, right. If we want to go "catching" on a more consistent basis, that lowly piece of soft plastic will do it. Plus, that "big bait-big fish" theory is just another one of those sportswriter hallucinations, because trust me (and a host of others,) an elephant WILL eat a peanut, especially in the hands of a good feeder. You want more "catching" for your fishing? It kills me to admit it, but let's put that darn tail on. Here's a few that have been working for me in some predictable conditions.

Paddle Tails: O.K. I'm a convert. Why? - Because they are practical; because minimalists like Capt. Tricia whip our butts with them every day, and because I'm seriously trying to be smarter here. They work because they are versatile and can easily be controlled at an exact depth and speed. Don't ever think, like I did, that a swimming tail is more suited for novices either. A good stick can keep it right where it needs to be and taunt fish in any number of ways. Where it excels is in tight columns of water where you either can't jig something vertically or don't want to, but still need plenty of action. An example would be shallow grassy areas, or, where you want to 'fly' it slowly just above nasty grass tips or sole slicing shell.

One bait I've been pleased with lately is Jason Brown's Mullet tail (www.Brownlures.com). Among other qualities, it's a little more buoyant than most, so a heavier head can be used for more distance when needed (an 1/8th rather than a 1/16.) The amber lure with chartreuse tail in clear water and the black/chartreuse inwell, actually both clear and dirty water, has been about all we've needed lately when the day calls for that type of bait.

Straight Tails: Bass Assassin has always ruled on the Texas coast. It still does, and its softness is there for a reason. Its snot-like density and hook slot allows it to be fished weedless better than most. We will continue to rely on this bait when conditions call for it. However, there are some new players on the shelves today, or at least new to me. There are several soft plastics available now that contain scent. Some might as well be bait, but others have just enough smelly properties to give us an edge when fish get finicky and we just HAVE to catch 'em. EXUDE is one that gives us that edge without crossing the line of being cut bait.

Exude's RT Slug is the same basic shape as an Assassin, but when it gets wet, it puts out a slime coat that fish take more interest in. We've been throwing it on the clear sand lately where you can clearly see a fish's reaction. During non-feeding periods, it's not uncommon to see fish swimming curiously three feet behind your lure. With an Exude, we often see them close the gap. Many of those last minute turn-offs turn into drags burning off. Did we entice a fish with proper placement and action of a lure? Yes. Did a little help with scent help "get 'er done?" No question.

Here are a couple of tips for fishing this bait. The RT Slug has a very narrow head. We have been using Hogie brand 3/0 black nickel screw lock jig heads on all plastics, but it's difficult if not impossible to rig a slug straight where it won't spin with a screw type head. It's imperative to get them perfectly straight, so use a push-on type jig head and make sure your hands and bait are dry. When it's time to really get down & dirty, both the RT Slug and the Exude Shrimp lend themselves well to being fished weedless. Mustad's Ultra Point Power Lock Plus hooks do a great job of getting that bait into some otherwise unfishable areas. Use a loop knot where the tag end points toward the bait for maximum action and best weedless results.

We could talk forever about the merits of tying on lead. Yes, it may be blasphemous to the purist pluggers among us, but I am forced to look closer at reality these days. Without mentioning any names, look at all of the icons of the Texas inshore fishery. When push comes to shove, they are all highly accomplished "tail" men. Challenge is challenge and fun is fun, but when we are compelled to go catching more than fishing, try pulling for them with a darn tail. Beyond that, when you really need to get rude, try throwing an Exude. I can't deny what I'm smelling.