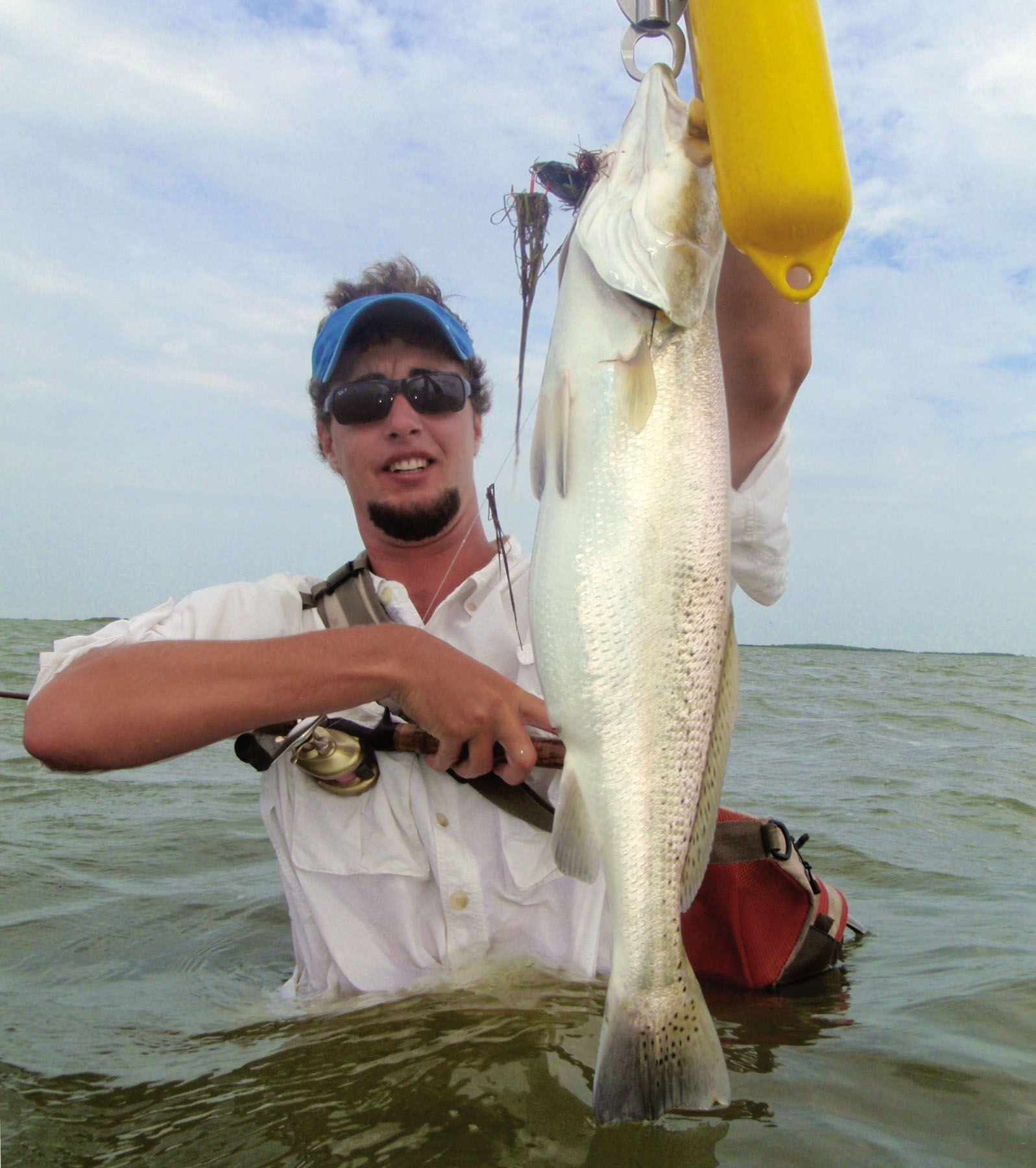 Trout weights seem heavier than normal for late summer.
We looked across the bay in silent awe. Here yet again lay frightening confirmation that Mother Nature always rules. Seemingly overnight the entire Lower Laguna Madre, normally a hyper-saline system, had gone totally fresh from an historic diversion of floodwaters down the Rio Grande. Nothing new for other parts of the coast, but supposedly nothing of this magnitude has ever happened to this country, not even in the memory of Port Mansfield old-timers.

"Now what?" we thought, imagining the absolute worst. Water running clear and green just a few short days before was now tannin-stained and smelled like nasty pond scum. Nobody had dreamed it would ever get this bad and there seemed to be no end in sight. However, as in any black cloud there can be a shred of silver lining, and hopefully a bright one is on its way.

We have already endured many of nature's fickle personalities this past year alone; from a red tide event to a brown one, from extreme drought conditions to an abnormally cold winter, to exceedingly high tides and now to this current historic freshwater inundation. What's a fish, or a fisherman for that matter, to do? Personally, one of the biggest motivators in this whole fishing deal is discovering new things; especially things that work, and especially things that work during adversity. We now have a great new excuse to explore, dream and perhaps discover some of what we may not have known before. That's what we've been doing lately, and not only has it been fun, it's looking like we have something great to look forward to.

Back to that initially shocking scene, the "now what" was discussed, and we figured we would just go for it and test some of these new nasty waters. We motored straight into the eye of the storm, right where floodwaters were noisily cascading over the ranch bank south of town. Interestingly, as we got closer, we could see birds of all sorts lined up along the walls of newly formed drains and colorfully scattered across the flooded marsh. They seemed busy, and while we watched we couldn't help but notice shrimp flying high above swirls and boils in the strong current. No way!

We eased out of the boat knee-deep, and despite tasting no salt whatsoever, almost every cast with a plastic tail into the drain produced a tight string. Nothing big, but there were plenty enough three pound trout in there among all of the smaller ones to make it a worthy stop. What was even more worthy was something else totally unexpected. Several new wide, deep guts were being aggressively etched into this normally featureless flat. It was exciting to think about what this might mean for winter. I think I know what it means.

We left there and checked a nearby spoil bank along the ICW. It looked like brown paper crap, but there were a few mullet swirls along the edge of the grassline, and again, the birds looked animated. We walked for a distance with nothing to show for it, but after switching to quarter ounce tails, rods began to bow. An old lesson from Trinity Bay daysthe water was fresh and nasty on top, but in the depths lay heavier saltwater and the fish were still there and hungry under that brown canopy. This might not be so bad after all if they are stacking up.

A few days later, with even more fresh water pouring in and reports of it all the way to the Land Cut, we decided to run extremely shallow on the east side just to see. Perhaps the southeast wind had blown the top layer of freshwater out into the bay and left some salt in the skinny. At first we didn't believe what we were seeing, but then the fantasy became reality. There were black-backed 2X4s gliding off in all directions, many in water too shallow for even a flats boat to shut down; very unusual during mid-day summer heat. We exited and walked among them, marveling at how many trout we were seeing and how big they appeared, but alas it was to no avail. These fish were simply not catchable, not now anyway, but it did suggest that large groups of solid trout were moving together ahead of the fresh water, and it especially suggested that this fall and winter might bring another epic season. After Hurricane Dolly dumped twenty-five inches of rain on this watershed back in 2008, fish moved towards the Mansfield area in force, presumably to saltier waters adjacent to the East Cut. It was by far the best big trout year I had ever experienced. Hopefully something similar is again in the works.

We also began to marvel at the abnormally abundant juvenile shrimp and crabs we were seeing. As in rain on a desert where everything suddenly springs to life, could it be that our aquatic life was also responding in a grand way to this adversity? The fish we were finding seemed much heavier than normal for deep summer, and it was apparent that there was some serious gorging going on with all of this available forage. Another good sign.

However, one serious sign not so good, and starting to become quite obvious, were the vast amounts of dead seagrasses starting to show. While wading areas normally knee deep in vegetation, much of the bottom had become mushy with thick layers of it blanched and dead. Kyle Spiller, TPWD Ecosystem Leader, recently commented in a news video that even small salinity swings in either direction can cause our fragile seagrasses to stress and die, and that no one knew how this prolonged event would play out. We will eventually see, but it is apparent that we are in for a new deal this season, whatever that might be. "Spot fishing", for example, where everybody just goes to their favorite GPS locations, may need to be re-defined for a while. In fact, many things may need to be re-defined, but what an excuse to get out there and search for the best of it all.

Yes, Mother Nature will always rule. She giveth and she taketh away, and one always has to wonder what's coming next. However, in knowing that she has a wonderful way of rejuvenating herself for the better, that silver lining we are looking for in all of this will hopefully be reflected off the backs of some incredible fish this fall and winter. I am excited, as that "now what" may easily turn into "get down here now!" Newness in anything is what keeps inspiration alive, so let's just gear up and imagine the absolute best. Maybe dj vu; Dolly all over again. Can't wait.