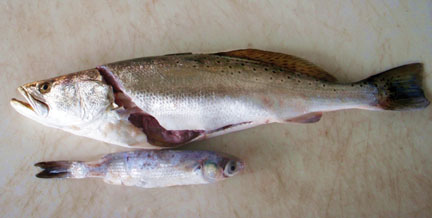 Autopsy reports can suggest big baits.
It had been well over three hours and not one of us had uttered a single word. We didn't need to. About every ten minutes or so, one of our plugs would discharge with a frothy statement much more compelling than any noise a human could make. It was high anticipation fishing; walking slowly and fully expecting every cast to become as stiff as the hairs on your neck... with five to nine pound trout just waiting for the right presentation.

Well, it's finally "that" time again. "That" time means fall, which really means that the door is cracked open for winter, and that means a real crack at the best trout nature will give up. Everybody has their own deal where fishing is concerned, but for this writer, if you are not pulling a belt tight over a pair of Simms waders, life is just not as exciting as it should be.

The scene was classic, repeated many times last year and therefore I repeat myself, but it's exciting enough to review again. Between northers, big trout and reds stack up along shallow shelves bordering deeper water. Although many times the water can barely be deep enough to wet your gravel guards, it can be plenty deep to hide trout much longer. You might not see much on the surface, but just knowing they are there makes covering water with your lures instead of your feet quite pleasant. If you fish for them you'll catch them, and although there are many ways to do it, last year we often did it with some bigger baits and enjoyed doing something different. In the past I assumed that downsizing lures in shallow clear water made the most sense. It often still does, however, there is just something special about hurling a big offering and expecting big results. Autopsy reports can be suggestive, and here are a couple of offerings to consider in water below your shins.

Floating Corky Fat Boys - I know many are tired of reading about this lure but there is a reason it is so popular with the big trout crowd. It fits all of the qualifications for extremely shallow work. Not really that big, but heavy enough to reach out to unmolested water, and can be feathered to land with a soft splat. It can be worked in a variety of ways to suite the fish's attitude for the moment, but just walking it like a topwater with the occasional pausing death twitch works fine. The hooks often hang down low enough to get through moderate floating grass, and swapping hooks between a #2 and #4 can also vary the floatation when precision is needed. If given a preference I'll just use pearl with either a chartreuse or black back and be done with it. Of interesting note is that the Corky operation has been sold to MirrOlure. The end of an era, the beginning of another, but MirrOlure has always stood for quality and Paul Brown will remain involved to make sure the creations continue to work as designed. We can probably expect them to become more readily available and back into our favorite stores such as Fishing Tackle Unlimited.

Rapala X-Rap 13 - This big topwater impressed a lot of big trout last year, and I've been stocking up on them with even bigger expectations. A stiffer action rod is needed, which gave me an excuse to try the stiffest rod Fishing Tackle Unlimited makes, the All Pro "Green Rod" in M2 action. Glad I did as I'm starting to enjoy it for a range of applications. My favorite X-Rap is in gold/olive, which basically just looks like a big mullet that needs to die. I do change out the hooks though, and certainly ditch the grass dragging feather duster on the back. It's just too big to be necessary and inhibits the action somewhat, so a Gamakatsu 1/O on the front and a 2/O in the back will loosen it up. When it's time for a topwater, this bait gets hit hard even in extremely shallow water. The key is just to not overwork it for the situation.

Super Shad - Swimming baits can make a lot of sense, especially when depth control is critical. New to me is the Super Shad by Big Bite Baits and it works quite well for shallow winter work when you need to drop down a bit. It's mullet-sized big, buoyant, bulky, and offers some incredible action even at very slow speeds. Fluttering it down into a pothole where a big fish is sitting is deadly. A big advantage is the belly slot for weedless rigging which allows us to really get down and dirty when we need to. The black or chartreuse back pearl seems to do just fine, but some have vertical stripes on them that resemble perch which might prove interesting in extremely clear water. You need a bigger hook for this bait such as a 5/0 or 6/0, but even regular little 1/16 ounce jigheads have enough bite on them to work. When this lure gets eaten it is usually inhaled so the hookup ratio is quite good. Just vary the amount of lead to put it exactly where you need it at the preferred speed.

After yesterday I'm thinking I'll be including another technique in my quest for late fall and winter trout. I was fortunate to fish with our own Casey Smartt, TSFMag's fly fishing editor; enlightened would be an understatement. I have not done much fly fishing in the last several years but that may change. Casey ties a big fly he calls the "Fat Head" that looks a lot like a Corky Devil. With the right tools you can chunk it almost as well as a Devil on a baitcaster and, I might add, exceptional accuracy. We often see ridiculously big fish laid up in tight places and this may be one of the only ways to catch them. The Fat Head barely suspends and the slightest twitch makes it live to die. I don't see how a big fish could turn it down and I intend to try.

It's no secret that we enjoyed a tremendous winter for big trout last year. I think I'll just shut up now and let the lures do the talking. Let's go catch a few pigs and make life as exciting as it should be. Think big... just don't get your shins wet!