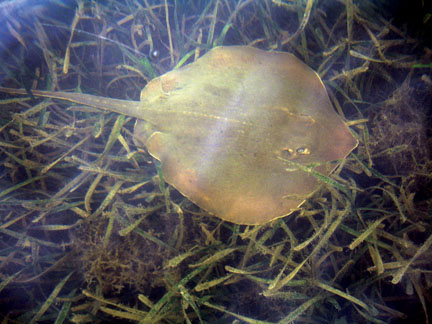 Carry a big stick…and walk softly!
I read in a good book somewhere that "to everything there is a season." Unfortunately, this has been my season to sit things out as far as fishing goes. I really can't complain a whole lot, though. As mentioned in the July issue I'm actually quite fortunate to be alive much less have a foot left to stand on following a good stingray poke back in May. The hit itself wasn't so bad, but an ensuing round of necrotizing fasciitis was. For the lesser read among us, the term describes an extremely aggressive flesh-eating condition, this one presumably from the increasingly infamous bacterium commonly called Vibrio. We really can't prove which particular bacteria sparked the infection, but in any case, this entire situation has been quite an interesting study. Some of it has been positive, and some of it has been positively hilarious. Hopefully we can all be enlightened from some of it though, so let's try.

Although things are certainly improving, keeping your foot propped up for more than two months can do strange things to a person. By default, when rendered immobile, one tends to "think" more than "do" which is almost always a dangerous proposition. I've spent most of my time either sulking at the dock, wearing funny clothes and watching the grass burn up, or throwing rocks at all of the trucks and empty boat trailers parked behind our house every day. I'm almost out of rocks, so I really need to get back in the water soon before the projectiles start getting bigger and my aim gets better. In the meantime, please accept this little no-fishing update, plus a few various observations inspired by a left foot, which even after sixty days, still looks like a raw chunk of seasoned fajita meat.

One positive aspect about this episode is that it seemed to increase awareness concerning the very real dangers of water borne infections. However, it also served to incite some undue panic among the masses, not to mention promoting some massive sales of protective gearfor those still wanting to get in the water after they saw the dirty pictures. The phone and email responses have been overwhelming to say the least. Let's categorize three different types of communication just for observation sake. Perhaps we can get to know our fellow readership a bit better, and in some cases, perhaps we should.

In the first category are the cookie people; hundreds of well-intentioned folks offering support with everything from medical bill relief to homemade cookies to homegrown tomatoes. Of serious mention are the gracious people at 2CoolFishing.com, who through a benefit auction, unselfishly helped pass the McBride Stimulus Package which no doubt helped bolster the local medical economy. Trust me, your foot is worth twice what your house is, so I might suggest reviewing your coverage as soon as possible if you recreate aggressively. The reminder here is that people are inherently good, and fishermen, for the most part, are some of the best examples of people willing to give others a tow when needed. We Texas coastal fishermen are of a kindred fraternity, so let's keep what is going around coming around.

The second category of callers is of the more frantically concerned, to which this response will hopefully reach out to a greater extent. Just last night I received yet another panic call from a family, who with safety in mind, was considering canceling a longtime tradition of going to the island each summer. The June pictures had them convinced that it was simply not safe to go in saltwater ever again, and were recoiling towards red and white bobbers and hill country bream instead. I've also heard countless cases to where wives and girlfriends were right on the cusp of accompanying their male partners to the bay, but after seeing the July issue, all progress was lost to cries of "Forget it I am NOT getting in that water, and as a matter of factyou need to sell that boat immediately!"

I'd like to offer some panic relief here. We offered this "incident" to promote awareness not fear. When we look at the numbers this was an extremely rare case, and in all reality, the only change we need to make is giving higher respect to skin breaks while in the water. Making good decisions about exposure in the first place, plus timely decisions about getting medical attention when needed, and the risks become quite acceptable. Just don't mess around with any flesh turning angry for any reason, especially after getting wet, and we should be OK. My experience should not stop any of us from doing what we love to do, we just need to do it with greater awareness.

Between those genuine "get well" wishers and all of the folks truly freaked out over this, there is one more category of responders who we all might marvel over for numerous reasons. I'm not sure of whether to be proud of them for trying to make things happen, or to try and help eliminate them from the gene pool if of child bearing age. The calls/mails go something like this: "Hey man, way sorry you got bunged up like that, but you're out for a whileright? Would you mind if we used your boat, your slip, your trailer, your rod & reels etc., and dude, if Capt. Tricia isn't too busy would you mind?"

These guys may qualify for a new standard of potlicking, and are probably the same ones who have clean garages because they borrow all of your tools instead of buying their own. It's just amazing how adept some humans are at sniffing out opportunity. Perhaps we might use some of that skill to sniff out fish instead.

Other quick news is actually about fishing and, again, extended think time can sometimes help put things in perspective. It has been said that every hour spent in reconnaissance is worth ten in battle, so I have been poring over maps and satellite images lately. If you really want to embarrass yourself, put a little dot everywhere you have fished in any given bay. Not a highlighter, just a little dot on exactly the area you have truly covered. If your results are like mine you will see habits emerge, the biggest one being the habit of passing up incredible amounts of potential water for the same old patterns. I'll be back in the water, none too soon, and the target is looking like late September. You can bet that after all of this I'll be looking for some new water even if it will be just one step at a time. You folks who have remained healthy don't have an excuse, so get out there and discover what you have been missing, carry a big stick, and remember to walk softly.