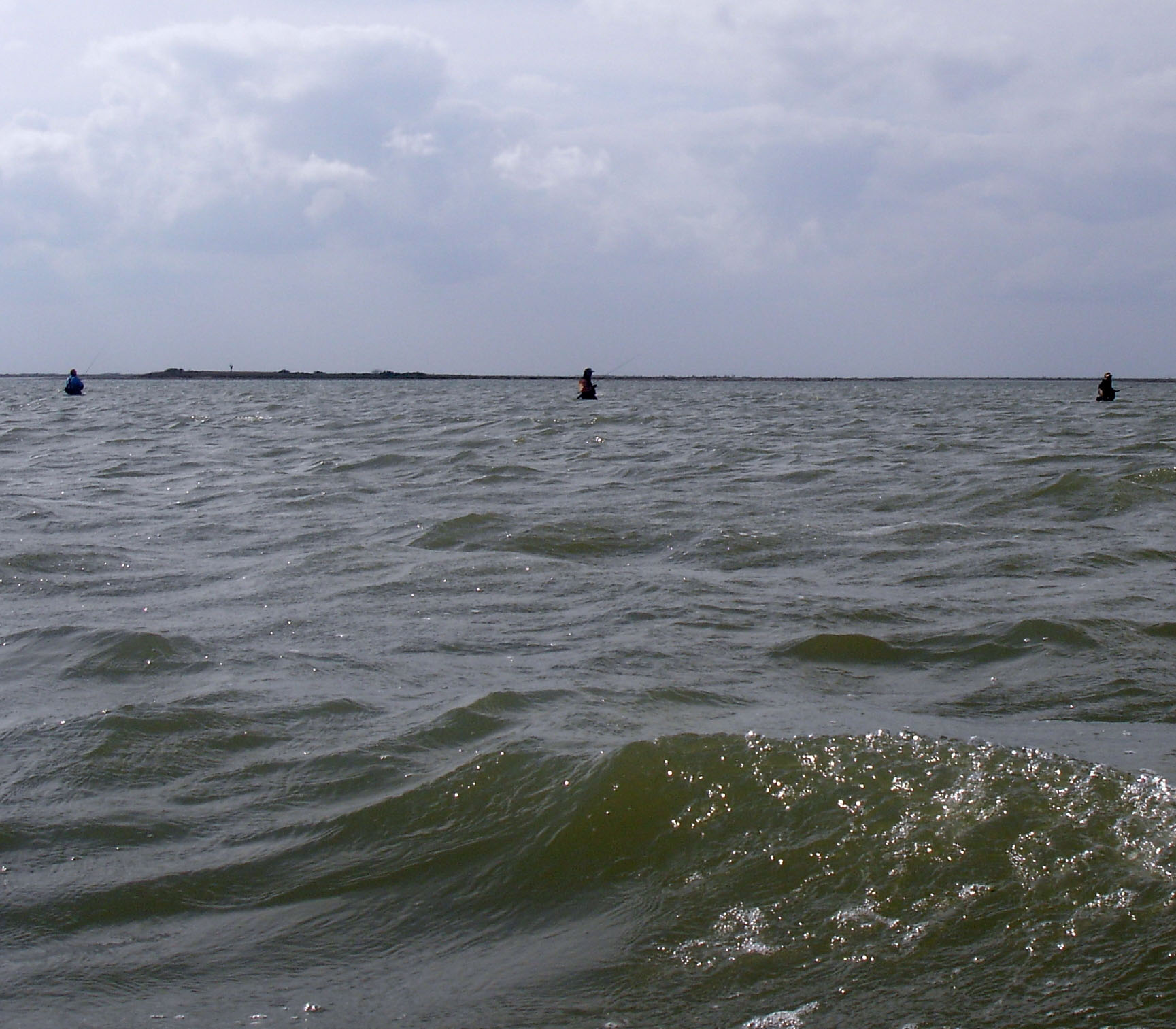 Fish, the good ones anyway, seem to relate to shorelines with some mysterious ratio between distance and depth.

"I wanna see you write something about being fifty yards off."

I was fishing with a one-liner king who we affectionately dubbed Captain Kirk. Besides being right on the money with reality-based punch lines all day, he continually beamed us up with his keen grasp of the obvious.

Back to Captain Kirk's fifty yard comment there are games where close just don't count. If we are "off" even by just a little, the results will be marginal at best. In the fishing world, missing by a mere fifty yards can spell the difference between the day of a lifetime and a day of agony. Since it doesn't take much to make a near miss, and if we really want to get better at this whole deal, let's look at a few examples where a little can mean a lot. That is unless, we are content to come to the dock as just another who "also ran."

The day in question wasn't exceptional, but by noon we had probably landed fifty or so good reds between the five of us. We also had a fair number of decent trout including a seven-pounder. We were in a knee-deep backwater, and as the wind began to move things around, some predatory fish started to respond and feed into the conditions. You know how it is with fish, they are either sitting down or moving, and for this moment they were moving.

There was a small ovoid bowl about six inches deeper than the surroundings. By small, it was perhaps fifty yards wide and one hundred yards long. The wind was slowly increasing at a slight angle to it, and as the water began to streak, everybody's drag began to streak a bit too.

These fish were mean and I don't know what they were eating, but they started eating the plastic worm as well. The interesting part is that several good wade fishermen working nearby basically blanked. How many times have we seen this? The guys right next to you kick 'em while you'd swear the universe was sterile or vise-versa. Once again, it's about being where we are supposed to be and knowing it when you see it.

Every water body can humble us and each offers special challenges; personally I find the Laguna Madre the toughest place on the Texas coast for consistent catching. Speaking from many years of upper coast experience, if we can learn to fish well down here, we should be able to fish well almost anywhere. Why, you ask? Well, basically because most of the normal tools we've been taught to use in other bays are effectively removed when you come to the Lower Laguna Madre.

There are no astronomically predicted tide movements, no mid-bay reefs, no significantly protected coves, no distinctive points or rocks, and with a few exceptions there is not much definitive structure. In other words, there's very little opportunity for "spot" fishing down here. Fish have tails and they use them; knowing where they were will not tell you where they've gone. It's all about reading the water; reading it well will get us closer to that fifty yard line, read it poorly and we might as well have gone bird watching.

As in all of nature, little of it seems to be evenly distributed. Look at flocks of birds, flyways used by ducks, herds of deer, or even how cattle congregate in a pasture. It's the old adage of ninety percent of the fish holding in ten percent of the water. We have to hunt for those small but fertile pockets of life, and these can and do change often per conditions.

In fishing we might call them stack-ups. While it seems a stack of anything would be easy to find, in reality it's almost like looking for coveys of quail in a field, but here it's with a single shot rod and no dog. Trivial bits of information key us in to places worthy of effort. We can either spend hours pecking out a single stray fish here and there, or spend hours looking for the lodestone. The more hardened angler looks for the highest opportunity and works it. So where is that 50 yd line? Here are a few highly opinionated examples.

One example which we can often apply in any current affected area would be the lessons learned at San Luis Pass. What an excellent fishing spot but be off by a few yards and it's one of the biggest skunk holes in Texas. Depending which way the current is running and how strong, what the forage is, wind direction and velocity, and a few other influences; fish can either stack in the lee of the bars, in front, on top, suspend in the guts between them, or hug the bottom.

By looking at what might make sense to a fish at the moment, and then getting in there with a probe on the end of a line, we can discover the pattern and stay with it until conditions change. That's being a high percentage angler. The same can apply to reefs and many other current dependent locations. Here, if you miss it by fifty yards you'd swear there's not a fish within fifty miles.

Another example might be along almost any shoreline. Fish, the good ones anyway, seem to relate to shorelines with some mysterious ratio between distance and depth–depending on conditions of course. Sometimes it's hard and fast to the bank, other times its one hundred yards off in waist deep water, sometimes out too deep to wade on them or any level in between. However, once we find the most productive level and depth for the moment, we got 'em and it's often along a very narrow strip. We see it quite often where four or five men are lined up, and the two in the middle are consistently bowed up much to the dismay of the other three. If you're off you're off and nobody gets hurt.

Back to the Laguna Madre, especially when flats fishing, being on exactly the right line can be (and usually is) everything. There may be a narrow strip of potholes at a certain depth that ninety percent of the catchable fish in the area are using. Productive areas may be on a distinct color change, a small break, or an almost imperceptible wind shear line. Even a lone bird or two sitting on the water, a hovering osprey, a curious pelican or just a few pieces of flipping bait can offer the first clue.

Spending a good amount of time looking before committing to a wade is shooting smart pool. With this new massive boat I have, doing a "check drift" before bailing out of the boat makes sense. That's what we and Captain Kirk did on the day which started this discussion. We watched, we saw, and stayed in a particular zone which offered the most trivial bits of information. Unfortunately, the guys on either side of us went home as 'also rans'. They were a mere fifty yards off.

To be sure, vast expanses of water (such as sixty miles of shallow Laguna flats that all look the same) can seem barren and intimidating to the unpracticed eye. Learning to tighten it up comes from a combination of common sense, experience, and spending passionate energy trying to pull it all together. I'll admit this again; this Laguna is the most humbling place I've ever fished. Learn to fish here by reading the water and you can probably go back home and be somebody. I'll never go back home so I'll never be anybody, but you can.

Fishing is truly a wonderful game where you can pit all your abilities against the workings of nature. One of fishing's most rewarding aspects is finally figuring out how some of it works. Can't wait to see you out there hopefully I'll be sitting on the fifty yard line.