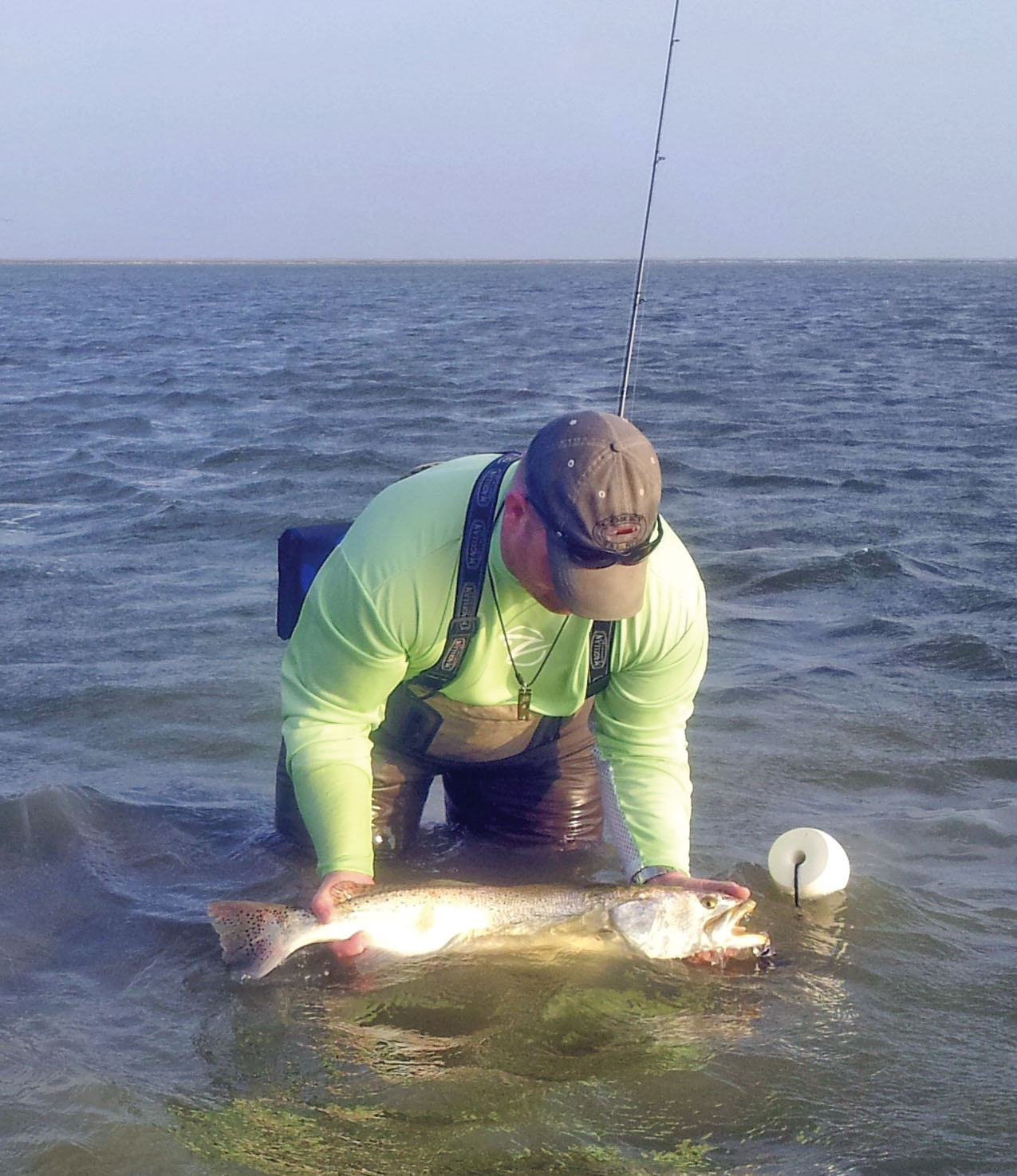 Our best fish usually come during just 20 percent of the month…those precious few days before a full or new moon.
I again had the entertaining privilege during January and February of sharing the water around Port Mansfield with Jay Watkins TSFMag's Let's Ask the Pro guy. It has been fun and inspiring to spar, share and compete among ourselves and also against the whims of Mother Nature. Sometimes he whacks 'em, sometimes Capt. Tricia or I do, and other times nature wins and we all bomb out. Although we are sometimes from different chapters in the book we usually find ourselves on the same page; see also - attempting to conquer something barely within our grasp. Lure fishing, you see, will always be an exercise in fascinating frustration and the best we can ever hope for is to be temporary master.

As far as us sharing things, we just had to shake our heads after an unexplainably slow day and agree there will always be many things about fish that we will just never understand. It's really what we learn after we think we know it all that counts, but there are a few basic principles we can follow toward understanding and ultimately becoming more successful. Enter the 80/20 Rule or Pareto principle as it is sometimes called, which basically states that roughly 80% of the effects come from 20% of the causes.

A good example would be in the world of retail business where 80% of the profits are derived from 20% of the sales, and 80% of the sales might actually come from only 20% of the customers. It's also called the "law of the vital few" and has been proven time and time again to apply to most anything we do. Fishing with lures is no exception, so here are a few vital generalizations that we might consider about who catches what, along with the when and how.

First on this principle list is who typically catches the most and biggest? The 80/20 thing is pretty accurate here, in that it's probably true that about 20% of the fishermen catch 80% of the fish. Some might say it is closer to 90/10 but, why is that?

Perhaps it's due to more time and effort on the water, but much of their success no doubt also comes from where they fish. Getting on them in the first place is everything, and here we can find that 80/20 rule again. The largest percentage of fish are in a small percentage of water, and the best fishermen will spend as much time eliminating dead areas as they do finding active ones. That has much more to do with reading the water than just reading a map or GPS. We need to remember that 80% of our honey holes may only be productive 20% of the time, which brings us to when these better fishermen catch their better fish.

For me personally, it's probably safe to say that we catch 80% of our biggest fish in the junk. By junk I mean trashy weather events like frisky wind, unstable weather and numb fingers. Many opt out of an adventure because the conditions may not seem very inviting but, if we really want to catch good fish consistently, learning how to be productive in all but downright unsafe conditions will get us closer to that hallowed tier of 20-percenters.

Let's don't forget how this mathematical principle also invites the weatherman, especially where coastal wind is concerned. I am convinced that 80% of the forecasts are probably right about 20% of the time. When they predict 10 to 15 mph we have learned to simply add them together for the 25 that is going to blow, especially in spring. Also; that 20% chance of rain probably means 80% somewhere. Thankfully though, one source I've stumbled on that has been refreshingly accurate is Windfinder.com, available real time in the boat with a smart phone app.

What we fish with is definitely an 80/20 candidate. Look at your own tackle box and if the shoe fits There's another term for a tackle junkie with reference to ladies of the evening. Some of you better shoppers can even dress the part.

I'd be willing to bet that 80% of your catches come from less than 20% of your lure collection. Unfortunately, there will probably never be anything on the shelf that will turn a mediocre angler into a top producer. We catch fish on basically two things - practical lure choices and the confidence to use them.

Practical here means matching our presentation to fit the current conditions, in other words, what might these fish respond to? A good analogy would be to never throw a rock when a pebble will do, something we see often during down periods when the strike zone might only be three inches, not three feet. A lowly soft plastic would probably be a better choice than a topwater in lots of cases.

How we fish can alter our success percentage in an exponential way. Do we spend 80% of our time running around, or concentrate 80% of our efforts in that 20% of active water? Do we mostly drift, wade, or anchor? Statistics actually say that most big trout come from wade fishing but, even then, are we casting thoroughly or moving like a thoroughbred? The whole purpose of wading is to be able to work an area over more efficiently and Johnny Speedracer doesn't do as well.

In wondering how I am going to try for the biggest trout I can this spring, I imagine my 80/20 applications will probably be fairly simple. However, someone said that the greatest derangement of the mind is to believe in something because one wishes it to be so.but I still have to go with what I believe I know.

In looking back, we seem to catch 80% of our biggest fish by wading knee-deep or less and on 20% of our lure choices. It's not my favorite method and might even be blasphemy to some plugging purists, but I have to admit that plastics are probably most consistent any time push comes to shove. I also can see past logs, where barring other factors, 80% of our best fish usually come during just 20% of the month. Those precious few days before a full or new moon and, you can also bet, these high percentage days will include junky weather and water.

Fishing with lures is kinda like going to church. Many attend but few really understand. However, one thing we can understand is how we might better focus 80% of our efforts on just those vital 20% of things that really matter.

Now, about Jay coming back to Port Mansfield next winter; we often make fishing more complicated than it really is, but I also intend to spend 80% of my time whacking them 20% more than he does.