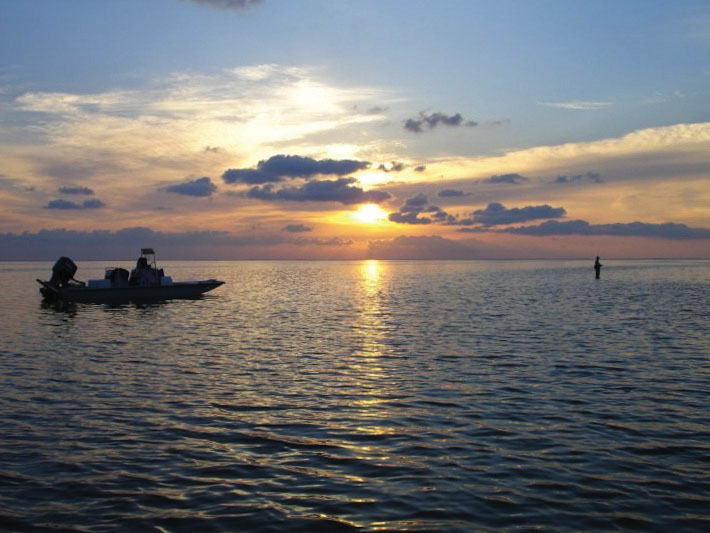 I’m thinking there should be plenty of opportunity in some non-descript areas of considerably less pressure.
I've certainly been dreaming about that very thing lately, getting a boarding pass and escaping to somewhere people don't understand English or comprehend silly-looking fishing shirts. However, reality is sometimes real, so although I haven't flown away yet, I did get blown away recently. By a couple of fly-fishermen, of all things. I think it's a story worth telling, yes, even for us "gear-heads" who's comfort zone can't seem to leave the thumb bar of a level wind. It started with a call from my childhood Cuban (and now Cuban cigar smoking) friend.

"Hey Mike," cried an excited Julio. "The guys I'm bring down are amped up and wanting to bring their fly rods. That OK?"

"Well sure it is," I snickered. "It's only going to honk 25 south the first day and 25 north the next, with little sun and even less water clarity."

Besides the poor conditions we were facing, especially for fly fishing, it seems that about 99.99% of those who tell me they canunfortunately can't.

Nearly all of my fly guys (I have other names too), even with 30 years experience, usually have about 30 years of just "mending the line" in a little ten-foot wide creek, just happy to catch a twelve inch rainbow-colored fish that matches their river-runs-through-it rainbow attire. It's demandingly different along the coast, and most out-of-state fly boys I've met can't handle anything below perfect conditions or imperfect fish. So, for this trip I naturally assumed that their long rods were going to be "also rans" yet again, just expensive ornaments destined to stay dry in the front hatch inside cute little monogrammed tubes.

We pushed the throttle over the next morning, searching for some precious opportunity not granted on dry land. As predicted, there was little to be found.

The water was again funky brown and the wind was close to blistering. Soooo, I dropped them down in the only worthy area I saw; some shin-deep potholes high on the eastside sand where we had recently been doing well. Nature often says we fish where we cannot where we want to.

Anyway, giving them credit, they did exit the boatfor about 5 minutes. They humbly expressed their concerns, and then I learned that fly fishing isn't going to be an option, it was simply what they were going to doregardless.

On the hunt we go, and it was fully 20 miles later that I finally began to notice mud puffs in potential number. I cut the key and not so humbly, said "Out! This is what we have, so y'all go flog your little silly-string hearts away."

I put them out near a shoreline, but low-low tide left about 100 yards of lung sucking mud to reach it. Julio and I had to drift for quite a ways to where we could jump back up, but it wasn't very long before the binoculars said, "Wow. One of your ballerinas is already hooked up. And well heck; would you believe the other guy is bowed up as well? Cool!"

The story is, that despite we two level-winders seeing plenty, and getting plenty of follows, swirls, knocks and slaps; I caught one redfish. Julio caught zero. So he just lit another Cuban.

Having enough of nothing, I idled as close as I could to pick our loopy-boys up, and became very curious to see them struggle from dragging stringers back through the mud. Actually they were not really stringers at all, more like dress shoelaces they had secretly wadded up in their little fishing packs.

"Well those were easy limits," wheezed one of the brothers.

They were Rod and Cliff Ziecke, Cliff being a 25-year veteran steelhead and salmon guide from Idaho. Julio just smiled while struggling to re-spark his toby in the wind. Mind you, it was easily blowing 25 knots.

Not only did they stick five or more reds apiece in short order, several were tournament class; approaching twenty-eight inches.

That was torturous for me, but we need to remember that steel sharpens steel, and sometimes we just have to bow to the stronger edge for the moment. What I had assumed totally impractical, especially for the conditions, actually became the most productive and for several reasons; I think.

For one, the cleaning table later showed bellies full of very small critters, mostly dime-sized or less translucent crabs and tiny little "minners" that I could not identify. Many times fish can become very target specific and they were simply throwing a more appealing size than our regular old tops and tails. Cliff was throwing a little crab pattern and Rod was using a simple little Clouser. He said it was almost like cheating.

Their recap revealed that the fish were moving toward them down the shoreline, and the way the wind was blowing, it was pushing their mud tracks into the shoreline at an angle. Every fish that hit a mud trail turned to cruise right down the edge, effectively swimming right into an easy presentation.

Another reason why they excelled, and probably the biggest, is that despite adverse winds, these guys were masters at their work and could easily place an offering exactly where it would not be refused. A strike zone can be anywhere from 6 feet to 6 inches depending, and their success was measured in inches. These fish were just not going to eat our conventional stuff, but they weren't going to pass up a little face-fed morsel.

Anyway, combine the elements of a focused hunt with the practiced draw and release of an expert archer. Add the mechanics of a mastered golf swing. Then mix it all in a saltwater aquarium and the idea of the game starts to unfold.

For me, hope sprang eternal. I started thinking of other worthy alternatives, especially concerning some of these big trout we often see so shallow it's near impossible to catch them on what most of us are used to.

Suffice to say I went out and bought everything they suggested. Equipment and set up can be everything, and they had the right stuff. I'm not exactly a "mend the line" slouch (I was vigorously taught by one of the best, our old fly fishing writer Bill Gammel); however, I was able to throw their set-ups with ridiculously less effort than anything I had imagined.

Among the possibilities I haven't really been taking advantage of, one of the most compelling, is looking into secluded areas, more like some of our bigger fish seem to be doing, those of considerably less pressure. Trust me, where these guys were they weren't going to get run over and the fish weren't going to get spooked by anything but booties.

There should be plenty of opportunity in some non-descript areas where big trout are laid up bathing in a backdrop of bone-colored sand. How cool would it be to catch an otherwise non-catchable hog trout on their own turf, eyeball-to-eyeball, and with basically nothing but a long peach switch attached to a reel with one moving part.

This may sound like pointing a bat over the fence, but I'm also thinking about a couple of tournaments coming up. Yeah, I'll take three reds over twenty-seven inches and perhaps even a kicker trout or two. We'll see, but I'm definitely going to try more with a Wanda Wand very soon.

There may also be a few general lessons in life here as well. Things that look wrong might be right, shallow thoughts can actually be deep, and tunnel vision is a good thingif you're in a tunnel.

Fishing for me is a gift to help understand why the world turns. How we approach it is our choice, with many options available. Hey; if you want to do it with thick crayon-colored line and it works, why not?

No, you smart alecks; you can't throw a croaker with an 8-weight, but if set up properly, fly fishing can be so easy that even a gear-head can do it. Now about that boarding pass; for some reason I'm thinking about Idaho, even if they do wear funny shirts.