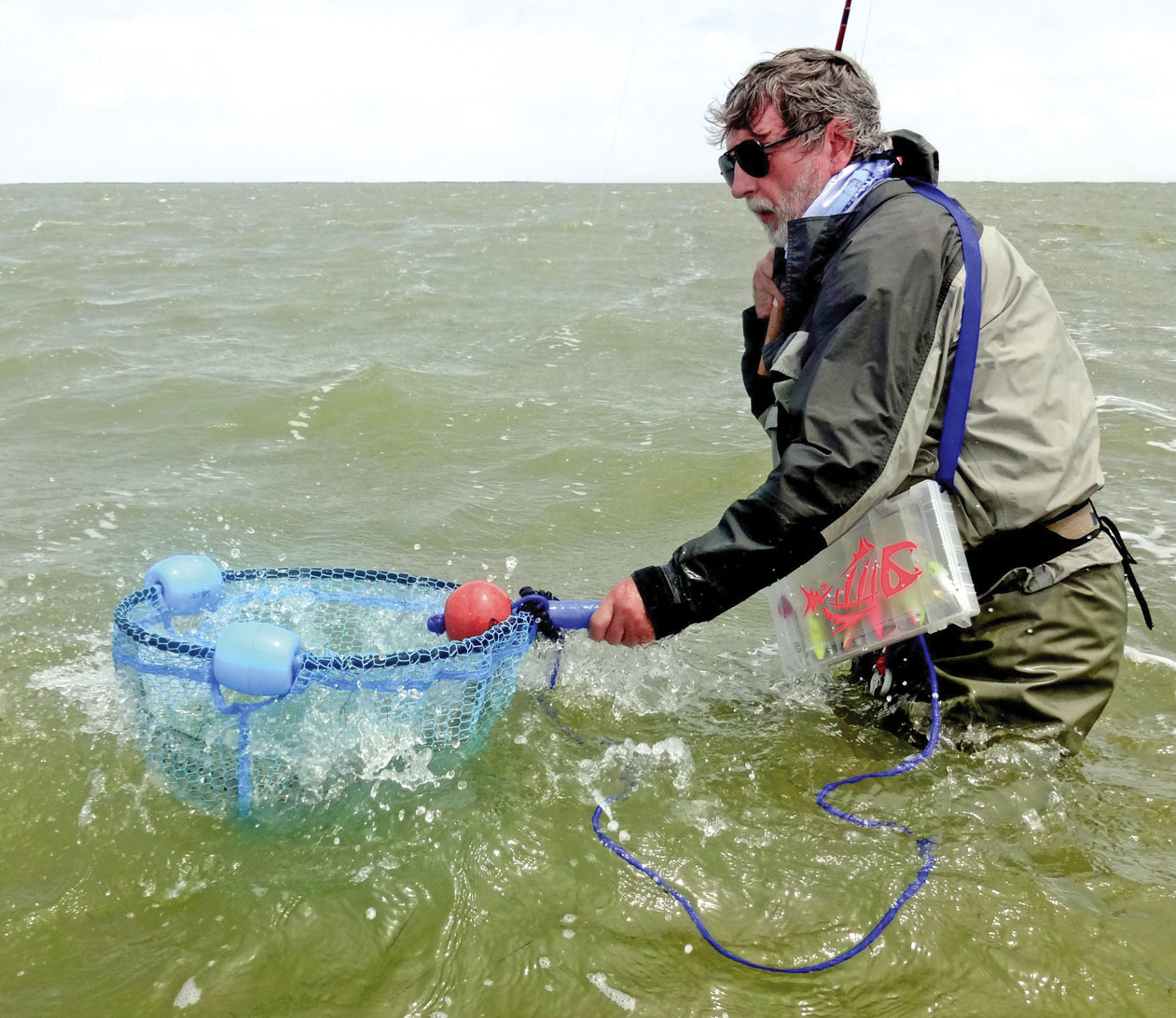 We can never learn everything about our fish but we can at least try to learn everything we can about our fishing. One easy topic would be our gear, tackle and trim, especially where wade-fishing is concerned. Leonardo had it right when he said, "Simplicity is the ultimate sophistication." For newbies as well as veteran anglers let's look at a few simplicities to help make our adventures on the water more fun than frustrating.

I well remember early wade-fishing and have scars to prove it. Button-up Levi's and tan khakis would keep on wearing, with wade rashes in all the wrong places, and my neck still cranes from a pith helmet so full of MirrOlures it often weighed more than my fish did. Never mind tennis shoe bunions or baggies full of spare parts like worm gear pawls, extra spools of line and leaky lube bottles. We had to carry stuff like that because becoming non-functional miles from the boat or down the beach wasn't fun, especially when fish are tearing up the water around you and all you could do was watch. That's probably why I started carrying two rods, but hey, necessity is the mother - right?

With the quality of reels nowadays we don't have to be quite so prepared but we still need what we need. As in any outdoor sport, having the right stuff is important but we don't have to look like a WWII radio man while packing it. The more stuff you carry while wading, well, the more stuff you carry. Everybody has their methods but after many days of slugging through the water I know what works for me. Here are a few of the things I ended up with.

Shirts Long sleeves are not only for sun protection but actually keep you cooler and can help reduce dehydration. Those old ranch hands had it right all along. Beware though, some so-called fishing shirts will dump everything you carry every time you bend over, especially while leaning over the gunwale. Avoid shirt pockets that are designed more for logo than cargo, best choices have zippers. Phones and cameras come instantly to mind. And not just any zipper will do; noncorrosive, please.

Leg Wear It's a personal decision to wear shorts or pants while wading, but please consider your fellow man in this. Some of y'all just don't need to be wearing shorts in publicever. Again though, wading-rash is not fun, especially in certain areas, and cotton has to be one of the worst offenders. Those cute little water pants with mesh panties inside can make some real interesting patterns and one way to prevent inner thigh flame is to wear a pair of bicycle shorts underneath. Just don't wear them solo OK?

Footwear Seeing that wading involves walking; let's be smart here. You wouldn't want to wear high heels to cross a cattle guard, nor would you want to wear flip-flops to a mud wrestling event. The reason you want specially designed booties is because, well, they are specially designed. Pick ones that fit. I'm not even going to mention stingray guards because you already know you should wear them.

Lure Carry We have to pack our stuff somehow, and whether you are a European shoulder bag guy, a fanny packer or belt man, the system needs to be efficient. Much depends on the area you fish. For example; a belt may not be first choice in belly deep water. I am mostly knee to thigh deep so a belt makes sense for me. There are many store-bought options available however hacking your own "wear to work" system is also an option. Here's some of what I came up with after years of walking around like a telephone lineman.

Belts What do we really need? Basically, we need a lure container, pliers, stringer, and a rod holder if you ever want to carry two or for times when you need both hands free. Now some things work, some not so much. Let's look at the major components.

Rod holders are supposed to hold a rod upright but some will flip and flop like a politician until eventually dumping your rod in the water. I tie-wrap mine to where it's firmly upright and, just inside my off-casting shoulder, you won't notice a second rod until you need it, and it will still be there when you do.

Pliers are very elementary but so is rust. The newer aluminum ones are light, strong, corrosion resistant, and some will actually cut braid. A good lanyard to keep them attached should be elementary as well.

Gripper-type landing tools such as an official Boga Grip are ER Room savers if nothing else, especially considering a mean fish shaking three sets of treble hooks your way. A good D-ring is necessary for good carry and a good float is necessary for continued carry. It's hilarious though, to watch newbies doing a bobbing for apples dance, when trying to land a fish with one. I won't go there now but there are ways to tie your shoe without falling over.

Nets The same way rod holders are supposed to hold rods, a net is supposed to net a fish. I saw the opposite for the umpteenth time the other day when a trophy class fish was lost on the outside while the lure was saved on the inside. If you feel the need for landing security, make it more secure by using one of sufficient size with a rubberized hook-resistant mesh. A bungee-style lanyard is helpful on this tool too. Hand grabbing is a right of passage in my opinion, and a lot easier to carry.

Stringers Huge pet peeve here. If chosen poorly, they can make you cuss the act of stringing anything at all. Poor choices are those so flaccidly limp they soon look like they got tangled up in a drive shaft and others are so unruly they resemble the art of taming a Slinky. I've done more than one face-plant after a wimpy stringer tied my knees together with a fish in-between. We simply need something of stiff gauge with a good sharp spike, and of a manageable non-tripping length. Pay for this one and it will pay you back in sanity, I promise.

Lures The first question is how many do we really need? If we already know what they are biting then not too many, but heck I never know so I just carry a few that should cover most situations. For me, it's usually in threes as mentioned in an earlier article; three topwaters (little, loud and louder), three tails (light, dark and natural), and perhaps three Corkys (floating, fat, and straight). The biggest variation will be jigheads for depth control - 1/16, 1/8, and maybe 1/4 ounce.

Xtrassentials There is no doubt that little things can matter, especially on extended wades where re-supplying takes you off of opportunity. Leader material, especially if you use it with braided line, will save even more cussing because you know you are going to throw yours off eventually. ChapStick for the overly-conversant types (like Jay Watkins) and extra cutters because you know the ones on your $49 pliers don't last long. A small hook sharpener doesn't hurt either, especially after your rusted pliers mess your hooks up. You might even want to include a chicken or rabbit's foot for good luck but how do you carry all of this? It might look a little retro but a beaded necklace works for me and also makes a great place for carrying a Power-Pole remote, along with everything else.

There's much we could talk about as far as functional gear goes but the bottom line is to wear what works for you. Don't ever be skeered to invent your own system - which might actually be as much fun as using it. In the end, it's often about how we do what we do as much as what we do. Y'all have fun, try to make Leo proud, and try not to trip on your stringer.