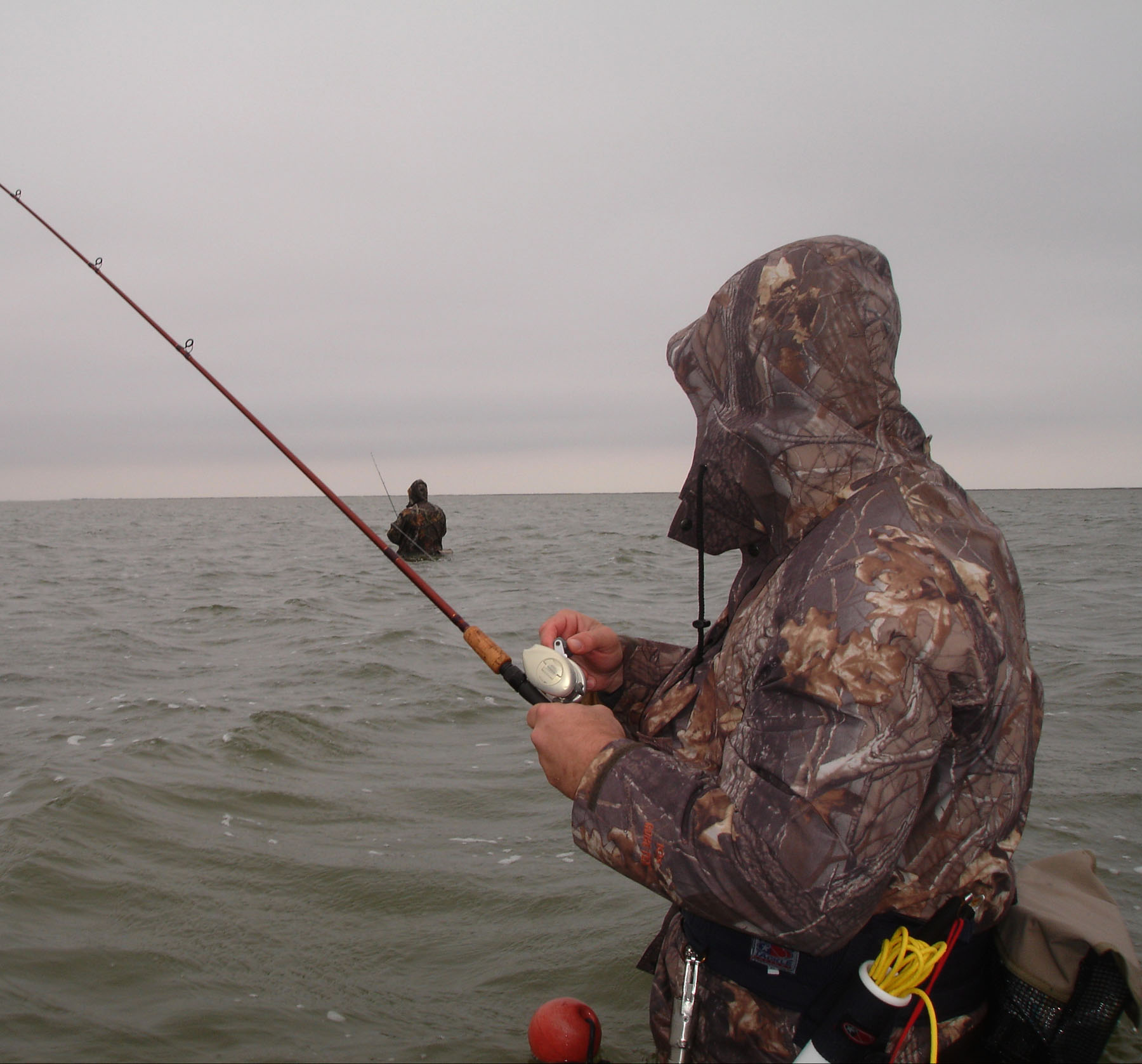 Low skies and high hopes.
A fine drizzle made the morning run cooler than comfortable but prospects of bigger tooth marks on already distressed plugs kept the blood running hot and the soul warm. That inner fire couldn't penetrate the whole body though, and after bailing over the gunwale to wade-sneak toward a secret little trough wind-nipped extremities remind you to move with purpose. That purpose was of course to try and fool the biggest fish in the area – right here, right now. For those of us hell-bent on big wintertime trout, it was one of those special moments where nothing else matters. It's great expectation to say the least, and for the consumed trout guy, the long-awaited cold water once again pulses fire through salt dependent veins.

On that particular day, a low pre-frontal sky told us it was time to be there. There wasn't another soul to be seen nor outboard heard, save for a lone commercial drum-liner quietly collecting the morning's harvest. The only other movement was a large feral hog rooting up the bank, broken legions of disturbed mullet finning just beneath the surface, and a young osprey hovering and waiting for the precise moment to plunge its talons into breakfast.

Well, there was one other movement; my longtime fishing partner always had his precise moments too. No matter when or where, and without fail, just as soon as his feet hit saltwater he always became urgently compelled. Comically, there he was again, barely maintaining a rapid two-stepper splash up the slippery bank, desperately fighting down tight neoprene waders while the hog squealed away across the low berm. He always wore those over-the-shoulder tackle pouches, and I imagine as much to insure other precious cargo... not the least of which was a dry and reliable supply of Charmin. That's another subject though, and functional gear suggestions will come later.

Anyway, with duty properly attended, we began to repeat a ritual shared many times over in all sorts of "postman" weather that included rain, sleet, snow, and dark of night. We started the hopeful walk into the approaching norther, eager to take advantage of the moment when mature fish might become most vulnerable. Over time we had pretty well figured out when to get in and when to get out for the best possible shot. This was one of those times where it worked.

As the sky lightened and the south wind increased, mullet began swirling aggressively over the deepest part of a trough that ran parallel to the bank. Topwaters were boiled but not bought, however the old original pearl-chartreuse Corky on a teasingly high retrieve began to pull some chunky three and four pounders. Awesome- but you couldn't help but feel that the next presentation might fool a true heavyweight into making a barbed error.

The wind eased into dead calm during the hour preceding frontal passage. Oddly, the bait went down, but the predators moved up, right to where the little trough began its sharp taper towards the bank. An occasional shower of mullet could be seen greyhounding shoreward from the edge of it, and to fuel our anticipation, a few big humps of water pushed right behind them. However, nothing we threw during that period could call a solid taker.

The first wisp of colder air hit and highly suggested it was time to get out, especially with the ominous horsetail of a cloud formation descending upon us. Just because you know when to get out doesn't always mean you do, so out came the topwaters and we began hurling them into the increasing winds, up beyond the shelf and pulling them back to the ledge. As the conditions deteriorated, so did some of the paint on our Super Spooks.

We tangled with several bigger fish that began rising with the barometer; landing three heavy sevens and one legitimate thirty-inch trout a little over nine, all on topwaters where the waist-deep swale faded to knee-cap depth. The best fish in the area had finally come out to play.

It didn't last long, but even during the increasing tempest, we were able to turn around and follow other good fish as they made their exit back into the gut, then off of the next drop to the safety of a deeper abyss. By then it took tails on 1/4-oz heads, but the fish, although lesser, continued to feed until my buddy got his Charmin wet and we had to call it. I was ready to call it too, partly in thanks to leaky neoprenes and waterproof jackets that weren't.

The ride home was adventurous but not something I'd recommend. Trust me, before we got in I was ready for some of that paper too, but the great expectations were well worth it and with December's arrival those high opportunities are again upon us. So, what are some of the things that we either learned, or were reminded of, hidden between the lines of the above little story?

When ya gotta go - ya gotta go, but when ya gotta go fishing... and it's big fish you want, don't let a little weather stop you. Some of the best fish are caught during inclement times and it's great to be there when others aren't. Good gear and good boat operators can accomplish much. Ask any tournament angler, but always keep safety the highest priority.

Again and always, if your topwater keeps getting buzzed but not busted, drop it down! The only thing a blow-up is good for is to show us a fish is (was) there. During precious windows of opportunity such as these, when it's clear you are in good fish but they refuse to commit up top, we need to be as frantic to get those lures down as my buddy was with those old ballerina style neoprenes. Being a master of deception starts with understanding the mood of the audience. As lure operators, that's a big part of our job.

If you think you are walking among fish – stop walking! Wait, work, and reap the rewards. After we eased up to that little trough, we never moved farther than a long cast, not until Neptune's angry trident moved us away. A mistake many make is walking through fish looking for others.

Knowing how to equate big fish with little structure is also big. Yes, it can be about the overall "spot" but most areas have little sweet spots within them, which can and do change with conditions. Throw at the right ones at the wrong time and you catch dinks. In this case, notice that they moved from out deep to the gut, then to the shoreward edge, and finally reversed course as the wind did. Be diligent in reading the water. Those greyhounding mullet aren't out there for exercise, and those big wakes aren't always reds. By the way, Google Earth rocks as a source for finding new and under-fished structure.

When the bait goes down we should never assume it's over. We see many times when bait becomes very still as big fish move in. Who knows- maybe it is an attempt to lessen their profile and not tattle their position. The lesson to be gained here is that quiet bait up top doesn't always mean it's quiet below.

Topwaters in cold heavy chop? Oh hell yes, but don't forget to take it off when it makes sense. While we're at it, the exact selection of lures isn't everything, but the application of them is. Find the right depth and speed, put it on the preferred structure at the right time, and you can probably catch them on a habanera pepper. There are several other lessons suggested here, but it's up to you to find them.

Quickly about gear; the old days are over, so if you are really serious about this, just "man up" and slip into a pair of SIMMS waders and jacket. Buy them once and be done with it, and then enjoy the incredible comfort and reliability. Also recommended is combining their high-tech layering system. Alaskan guides are touting WaderWick liners under thin fleece in forty degree water. Shedding this gear is easy too; a far cry from peeling smelly old neoprene. We don't have to be uncomfortable anymore, and products like their WindStopper jackets stop everything except you getting out there.

Expect something great this year and go for it. It's all about big tooth marks. Go for the moment and I'll see you there.