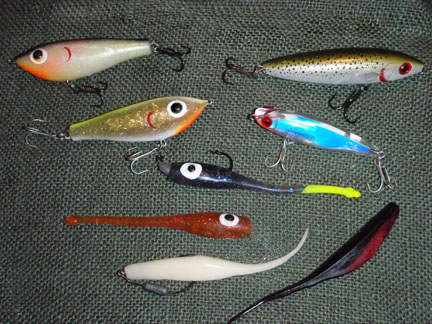 Standing in water that barely covers your wading booties with your boat the only man-made structure in sight; the feeling of being where humans aren't supposed to be comes easy. It's mystical and silent except for an occasional mullet flipping or protesting squawk from a lifting heron. The only real distractions here are self-imposed, but the thrill of anticipation dominates and would be hard to rival in any other given arena. Like those ancient mariner's charts that warned "Here Be Dragons" there are mythical beasts lurking here as well. It is just a matter of knowing it, and most importantly, wanting it. It's fishing for big trout on purpose and in water skinnier than many might think. It's awesome, and hey, it's time!

One of the beauties of fishing is that there are so many ways to do it we can all specialize in whatever methods inspire us most. It just depends on what our measurement is. For me, probing for big fish in extremely shallow water does it, especially down here in the magical Laguna Madre during the colder months. I have this curse of wanting to catch them my way, regardless what other method might be available.

Everybody has opinions and this is merely one look at one way to fish, but for me, it's one of those compulsive drives that have made me do a lot of stupid things. It's like a kid going treasure hunting and finding things we are not supposed to, then realizing that more treasure awaits if we just dig.

Big trout can be found in many areas, but a certain percentage will often use water that is shallower than most people are willing to try. Different tribes of fish perhaps, and while those that go shallow in winter can be fairly easy to pattern, they are not the easiest to catch. Lower water levels from November to March can help concentrate great fish in predictable times and places. Compelling is that where you where you find one there will usually be others.

A pattern I anxiously await occurs following a norther; the immediate recovery period after a good blow. As soon as it's over, and the sun either comes out or the air becomes warmer than the water, big fish will move up to where we can isolate them better. We're talking water that is ankle to shin deep, and there are many types of shallow areas they will use but most common are fairly near deeper water and with a lot of cover. Cover can be a lot of things; broken bottoms, color changes, thick grass, little depressions, bait lines, etc.

It's not always about baitfish, although it's good to see at least some movement or at least good concentrations nearby. This seems to be more about laying up comfortably and unmolested, yet still close to that food bowl when it's chow time. It's like the big dog lounging in the crawl space, but still able to hit the porch when the dish gets rattled. To the unenlightened, some of these areas may look like nothing but stingray water, but a few others see miles of silent opportunity.

The most useful key to approaching big fish in little water is a good presentation. The idea is to sneak something to them they can't turn down, not chunking something on them they will run from. Stand still, cast to every potential fish holding spot you can reach no matter how small, and then move up a few feet and repeat. The slowest offerings are usually the most effective; not because fish are lethargic as we often hear, but simply because they are spooky. Here's a short list of what I like to use but certainly not the only things that will work. Imagination is a beautiful thing so feel free to be creative.

A floating Corky can excel for several reasons. You get that critical casting distance, yet the landing can also be feathered to make a "good" noise, a flat entry that sounds like a vulnerable baitfish and not an attacking brick. They are fairly easy to keep out of the grass whether it's floating or growing, and you can manipulate it to custom fit many situations. It is a very interactive lure that you need to [or are able to] constantly adjust, a great characteristic which some have perceived as a negative, perhaps because they haven't "gotten it" yet. That "high maintenance" effort is exactly what helps us be a better angler.

The biggest factor is figuring out what presentation you need for the moment and this can change with each cast or even during a retrieve. I'm talking about things like working it faster across that shallow grassbed or pausing it to sink deeper into that little depression. Taking the time to address each potential spot the best way possible is fishing on purpose. Throw it long and give it some teasing death twitches over every suspected fish holding zone. Hang on with high expectation.

Plastic tails offer so many options it's not realistic to even go there. However, I would like to mention that I rely on the Brown Lure Devil Eye on a 1/16 oz. screw lock jig head. It has a little fatter profile, casts a mile, yet it is buoyant and responsive for shallow work. A weedless Bass Assassin can be killer for the most discriminating fish. You can get it right down in their face with a lot of hang time and it rarely spooks them.

Sure topwaters can work, but only if you can. There are topwater artists and there are topwater thrashers. The big factor, again, is not to threaten these fish with too much information. One game I like to play with a surface plug in delicate conditions is pretending the bait is trying to get through enemy lines without being detected. A lot of big fish have been fooled by 'dead sticking' a plugjust letting it rock in the waves with small, teasing twitches. No, it's not boring if you really want what lies below. There are certainly situations where a strong top water presentation is needed, such as off-colored water with a ton of bait, but mostly it's about seduction.

As with any lure offering to these mature shallow water fish, it takes an iron constitution to stick to your goal. It doesn't, however, take very long to develop one after only a few successful attempts. There's just something very special about catching big trout in water shallower than they are long, even more special is water that barely cover their back.

Colors? Sometimes, but for me it's usually more about size, speed and placement. With every cast; work to force that bite from fish you know are there. You may get only a few bites all day, sometimes more, sometimes none. But as we often find, the biggest rewards bring the biggest challenges.

Whatever your fishing quest might be, just go for it. If this type of determined effort appeals to you, go with confidence and it will happen. We can read about things a thousand times or experience it just once. The dragons will be there, and so will I, but you'll have to draw your own map. Remember though, we don't have to slay those dragons to win the battle. Let them live to snort another day.

By the way, this whole concept is not newhere is a humorous quote from Dr. George Washington Bethune in 1847.

"An angler, sir, uses the finest tackle, and catches his fish scientifically - trout for instance - with the artificial fly, and he is mostly a quiet, well behaved gentleman. A fisherman, sir, uses any kind of 'ooks and lines, and catches them any way; so how he gets them it's all one to 'im, and he is usually a noisy type of fella."

I wonder if George did any stupid things while chasing his passion.