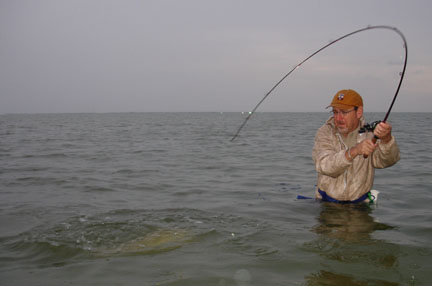 Fishing as we know it is still quite awesome.
Crossing the Rio Grande into 1960s Mexico was adventure sure enough; but when you pushed on to the seventh or eighth pass of the Mexican Laguna Madre dreams of everything a rod and reel was supposed to be became reality. Sea-life of all sorts was plentiful, plentiful to the point of never imagining an end to what lay before you. The only limitations of harvest were how many fish you wanted to skin and how much ice survived for the trip home. You didn't need GPS, fancy lures, or internet reports. The fish were just there, and they were supposed to be there just as they had been for eons all along the Gulf Coast. Legends were made by many who came before us, but most are long forgotten or simply dismissed as rocking chair embellishments by more recent generations. However, most stories are mostly realand so is today's obvious denial of what once was.

Back then it didn't take long for electrified civilization to fade into the horizon after you left the old Salt Mine road. The cutoff was about ten miles south of the border, named for the salts evaporated from the flooded fields along the way. It took you all the way to the second pass and avoided the "experience" of the second federal checkpoint. The beachfront gradually became more primitive and tidal currents raced through drifts of tire swallowing sand. Other adventurous sports made the journey and many ingenious ways were devised to tame the hazards. We pulled a little airboat and used it to push our trucks through low tide crossings and high tide dunes. Some rigged pontoons and even makeshift propellers on their vehicles, while others floated their boats across on trailers with a three wheeler strapped in the bow, using that to tow the remaining seventy miles.

All of the cuts could be good, but prime were the third and eighth breach between the Gulf and the Laguna. There was a small oasis at the third, the famous Hotel Del Mar which housed many a salty character over the years. While wading the mouths of these passes, and struggling for balance on ever-shifting sandbars, you watched in awe as fish suspended themselves in lifting rows of shore-bound waves. Sometimes the swells were completely filled with color as entire schools rode the incoming tide. Redfish mostly traveled tightly together and would cloud the coke bottle green water with their coppery hue. There were also silver and black missiles cutting through the breakers; big surf trout hellbent to crush baitfish rafting in the shallows.

We mostly just threw spoons or soft plastics and that was all you needed. A Tony Accetta Number-5 reached beyond the whitewater and was often met with violence as soon as you engaged the reel. The first time I took my brother down there he did what most would do; a big no-no in that setting. Freddy walked out on his own right at dark, stepping into a classic "every cast" bite. Freddy's frenzy was equal to that of the fish as he strung everything he landed until he could string no more and then dragged them back into camp expecting his full glory due."

"What have you done and what are you going to do now? You just don't do that. We don't clean fish after dark, we still have several days to go, and you just wasted a bunch of our ice."

Freddy learned quickly that back then you planned to manage your catch, not just catch and string whatever you could manage.

We mainly just worked the passes as you didn't need to go anywhere else, but the airboat took us deep into the rich waters of the Laguna. Ours was a little step boat made of plywood. It only had a half-cage on it because you had to hand start the engine by pulling the prop; but when you got her up on that front step she would scoot. We ran the surf too, timing the ebb and flow of waves and zigzagging sandbars all the way to La Pesca, but exploring the deserted back-bay was also compelling.

During high water we'd cut over miles of oyster reefs about a foot deep to reach some of the better tidal guts. Reds on top of the shell could be so thick that you had no choice but to run on their backs as they had nowhere to go. If you shut down they scattered, but they'd be right back surrounding the boat again within minutesthey didn't seem to know what it was. On the edges of those guts we could sightcast snook up to twenty-five pounds. You had to be quick and accurate; if you missed that snook by a foot a trout would get it and we had all of those we needed in the surf.

Flounder were there too; lots of them. A local who lived with his family under a driftwood lean-to at the third pass put us on them. Before every trip we collected clothes, toys, and anything else we could pack to give away. They watched over us and one evening he strolled into our fire asking if we wanted some flounder. He was soon back with an incredible string, and I say string because it literally was one.

We followed him back out, and armed with an old knife taped to a stick, he simply blind probed the sand under the illumination of an endless Milky Way. The spear bucked back consistently. We later brought lanterns and shamelessly filled tow sacks. You just stood still waiting for the sand to clear aned then picked out the biggest one to settle at your feet. Other predators scared the heck out of you too, mostly big snook running bait up on the shelf; and the night was loud from sounds and smells of nature's brutality.

Some trips we carried only redfish fillets home, other times only snook or trout, but flounder was the other white meat breaking cooler hinges. Those great hauls were always expected, but things changed rapidly after the coming of the "ice age". The government built ice plants enabling commercial fishermen to meet the demands of an eager market. We later flew over the area in private planes and recoiled over the endless grids of fish traps. They were very efficient and huge schools of fish were herded into them by small boats. Much of whatever came into the passes didn't make it back out through curtains of gill nets. Fishing was quick to slow down, and after that boy got killed going through the airboat prop we just quit going down there.

Fishing, as we know it today, is still quite awesome and even improving in many aspects. But compared to yesteryear stories, such as the above shared by Capt. J.D. Whitley, what we experienced in recent weekends pales in comparison to what he saw decades before. What was happening down in Mexico then was happening here shortly before that, and takes of one hundred fish per angler were hardly newsworthy.

Tarpon and sharks hung rotting on picture racks, bay turtles churned through local canning factories, market tables heaped with fresh "pike" and giant sawfish roamed the bay while monstrous jewfish guarded inshore structure. In a mere blip of geological time, catches are now limited by more than just ice, and today we are happy to burn twenty gallons of fuel just hoping we find three reds and ten, or in some places five, trout.

We industriously created our own "Ice Plants", which like then, rapidly helped change what always was. Myriads of nicely lighted ramps launching fifteen year boat loans, satellite navigation guiding the unseasoned, full-color imagery down to pothole level, hi-gloss advertising hyping new canal lots in old wetlands, well-intentioned people betraying fish on the internet and money tournaments vying for what's left in a booming recreational industry. A firestorm that was created by ice, and we now own it.

Progress is a wonderful thing however, so let's get out there this October and punish that new rod and reel. Remember though, that just as there were those who blindly blazed before us, there will also be those excited to follow us as well. If we are going to live and die with faults, let them be faults with passion. Fishing qualifies, and so does being passionate about stories our kids should be able to tell. See you there, but don't waste that ice because we have several days to go.