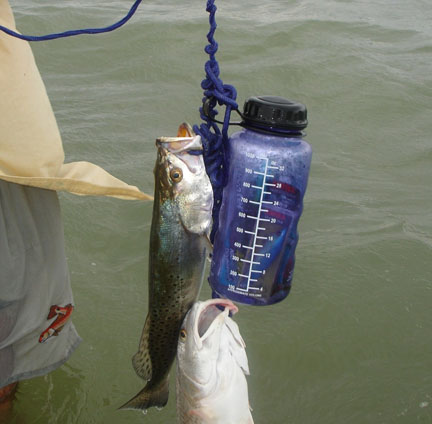 Last month we considered how values evolved as society progressed from the sweaty Age of Industrialization to the modern-day Age of Information. Next we pondered how newer fishermen handled the trip. We suspected that many now spend more time trying to pull skill out of text instead of water, and cautioned that the overflowing pond of information is vast and cheap and the so-called experts many. So now we ask; what comes from true experts who pull knowledge and skill from water; and what from wonks who don't fish interviewed by geeks who can't write, supplying opinion for those who can't think? Discretion says that like using a topwater, we need to wait for the meat before setting the hook.

Here's the second installment of excerpts from the Industrial Strength Wade Fishing Handbook. Not sold in stores. Call now.

Tip # 614: Waders: Rubber is out, breathables are in. The newest styles even come in pink and the "man" colors have optional zippers. Boot foot waders go with wade fishing like high heels go with cattle guards. They make soft bottoms softer and are better suited for sitting in duck blinds. Stocking foot waders with streamlined booties can make any bottom seem harder, unless of course you are a man and buy them in pink, in which case your bottom is your business.

Additional uses include year-round protection against water born illnesses. Other benefits are surprising; such as usually having to take them right back off to retrieve that Cracker Jack prize hidden in the bottom of the feet. Additional surprises can force them off again shortly after entering the water. Waders can perform as no laxative could ever possibly claim.

Tip # 432: Knots: Many fishing knots exist, but we only need to master a few. Practicing with a dock line can help visualization, but when all else fails, simply follow the general rule of connective practicality. "When you can't tie a knot, tie a lot."

Tip # 272: Nets: A landing net is to better insure the landing of a fish, so choose wisely. The smaller the net, the bigger the fish you will catch, and also lose. The bigger the net, the more chance you won't catch as many fish because of spending too much time removing treble hooks from it or trying to fix the worst backlash ever after snagging that begging tool with a back cast. The more stuff you carry when wading, well, the more stuff you carry. Hand grabbing is a right of passage.

Tip # 466: Zippers and Saltwater: Whatever you buy for coastal fishing that has zippers on it was designed where a river runs through it. Using silicone spray can help unzip that problem, but pepper spray may work better for some of these manufacturers.

Tip # 477: Stringers: A good stringer is hard to find. Most are too flaccid and require twenty minutes to untangle fish from it, while attempting to fold and store some newer versions is like trying to tame a Slinky. We simply need a stiff rope of appropriate gauge with a good spike, so we need encourage manufacturers to fish first and sell later.

Tip # 265: Water Rage: Inevitably we will be blessed with improper actions and the primordial instinct is to scream, maim and kill. However, old surfing Karma says if you let them have this wave, the second one will be bigger. On-the-water payback only encourages the cycle, so better to address the infraction landside. However, if that doesn't work, civil unrest comes to mind, such as dropping five thousand keys at a biker rally with their address on it, marked "$5O reward for return."

Tip # 511: Sting Ray Protection: We need to decide which is worse: temporary pain and suffering from a stingray hit we may never get, or permanent disfigurement from trying to wear these things while wading mud. We either need to convince manufacturers that Neil Armstrong moonraker boots don't fit our application, or perhaps buy more keys.

Tip # 443: Proper Wade Fishing Attire: Historically only three colors were acceptable, moss green, khaki, and brown so we wouldn't spook fish and we'd look like outdoorsmen. New florescent colors such as Sushi Salmon, Urbanite Shrimp, and Goober Glow Green are now not only acceptable, but highly recommended, so idiots won't run you over. However, among seasoned salts, pink is too liberal and pink Crocs should be illegal.

Tip #436: Sticky Returns: Promotional stickers make public statements with cheap exposure. On boats they say, "I'm cool, follow me." Higher thought suggests product stickers on the inside and another on the outside saying, "I might need a tow." Truck windows with fishing stickers get exposure also, such as you fish a lot and therefore have disposable income and should spread the wealth.

Tip # 438: Scented Baits: Scented soft plastic lures work when others may fail, are a genuine fake imitation of the real thing, and serve other purposes too, such as helping bait-oriented people pretend they are throwing lures. Quite simply they are designer pieces of cut bait. So get a big gulp of that, but please don't complain about stingrays and hardheads.

Tip # 231: Tournament Strategy: Pre-fishing is critical, but a common mistake is fishing more than learning. See what you need and get out, or you will predictably catch the fish you need for the tournament before the tournament. Also, the hero or zero approach isn't your best approach so, try to just catch good fish first, and then concentrate on upgrading with less stress. However, don't take any of this too seriously. It's hard these days to beat extreme funding with skill, and a ninety-mph boat with three weeks off beforehand is the new the apex predator. $1OO key reward.

Tip # 16: Rigging Plastic Lures: Inserting a jig head into a soft plastic lure requires rudimentary knowledge of geometry; namely, the basic properties of a straight line. However, rigging them crooked can work, especially if you are fishing for monkeys because the lure will look like a banana. Never mind it spinning and scaring fish while it twists your line. Actually, crooked may be more normal in today's society for various reasons.

Tip # 44O: Passion Control: Avoid temptations such as naming your dog after your favorite lure. Yelling "Fat Boy" at the top of your lungs in the middle of the night might invite strange visitors and they might arrive in pink Crocks.

Again, in short, real fishing knowledge comes from a stick not a click. So let's be industrious and go fishing. HeyIt's been awesome!