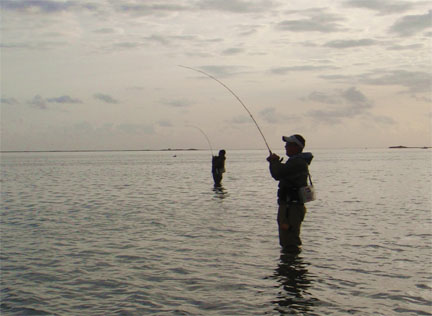 We often have to wait for conditions to develop.

"It sure looks like everything is shaping up," I said, more hoping than knowing. "Look at all of those hogs and turkeys moving down the bank. The birds are getting up too, so it's all finally starting to get right. Let's get out of this stupid boat and hit it again. You ready man?"

My optimism was met with little more than a knuckle dragging sort of grunt, and I could only marvel at how fast another redfish flew off the stringer tied to the bow cleat and plopped into some hot grease on the rusty Coleman stove.

"Nope" came the reply. "Still too early. It'll be another forty five minutes before anything happens, and besides that I'm totally famished. One more redfish burger and we'll get back in the water."

Mark and I had been on anchor for three days and on top of some of the best winter trout Texas could offer. Although we knew we were on incredible fish, there were daily periods lasting for hours where absolutely nothing was going to happen no matter who you were. We only had a few dink trout and a couple of reds by mid afternoon, which made the little things like a hot meal on a frosty flat count more than usual. Food always seems to taste better in a boat, but frying up a square-cut chunk of fish while the cells are still alive should get top billing on the Food Channel.

I reluctantly agreed about the time frame, plus the smell of the grease had me salivating for some of that mayonnaised mercy soon to be served on a toasted bun. We had time anyway, because each day we had to wait later and later for these fish to become vulnerable to the plastic we were throwing. In nature's waiting game nature can play, we often have to wait for conditions to "develop" if we want to catch fish, especially the type of fish some people want to put on their walls.

That little fish fry happened nearly ten years ago on a remote part of the lower coast. After an early morning flurry, everything would go dead and you'd swear there were no living creatures on land or in the water. Then 'something' would happen, and the whole scene would transform into an explosion of activity in all directions. When conditions "got right" the catches were epic in anybody's book, and I would say that twenty trout over seven pounds each day qualifies as epic. However, it came at cost few seem willing to pay these days, which is time. Rarely does nature perform on our preferred urbanite schedules, and unfortunately "three hour tours" often don't lend much of a chance. Sure, we can catch fish when they are not feeding, but we can often plan our allotted time to better coincide with greater catches.

Letting things "develop" can mean a lot of things. There is much we don't know but we can easily know it when we see it. It's interesting how nature seems to work in concert at times, where life everywhere seems to become active simultaneously. Deer start to move, ducks start filling a previously empty sky, pelicans begin paddling out, ospreys begin to hover, and all of a sudden the baitfish come to the top and our topwaters start going down. We don't always know what sparks activity in general, but as far as fishing goes, we can often predict scenarios in certain areas. Here are a few examples of when things developed from dead to deadly, which we might be able to duplicate elsewhere.

Last December we had a good group of fish hanging in a big depression bordering an expanse of shallow water. They stayed out and suspended somewhere in the depths and basically did a bunch of nothing for long periods. You could peck a fish out here and there, but basically nothing was happening. The condition it took for life to explode was increasing onshore afternoon winds, which started current moving for one thing, but also began driving water off of the flats bringing the bait down with it. As it tumbled across the next level drop and then into some now deteriorating water clarity, both trout and reds moved up to the opportunity. Now we could isolate them when they were aggressive, and after having nothing but dinks all day, within a two hour period we had several trout over six pounds and three over eight. I can't tell you how many boats had pulled in and out earlier, then left after catching nothing. Perhaps they needed a fish burger.

Also last December, the same but opposite happened. After near zero activity all morning on a cold bluebird day, increasing south winds began to push water up to and along a sun drenched shoreline. As color started to form in the warming shallows, legions of baitfish pulled up with large predators hot behind them. Fish previously staged out deeper finally made themselves available to wading depth and pulled tight to the bank with drag-chattering vengeance. Astonishing was how fast the scene turned from Dead Sea into showering explosions of mullet.

Another classic example of waiting it out is waiting for the water to develop some "cover" on it. Calm surfaces and clear water do not encourage activity in many areas, but let either wind or tidal current start feathering some ripples on the water, create rip lines or some good color changes, and be amazed at what shows up seemingly out of nowhere. Another sometimes predictable scene in the winter, particularly after a strong front, is things starting to "get right" as the air becomes warmer than the water. Watch fish rise from the depths to high up in the water column and become more aggressive. Barometer changes, such as when winds veer back toward the south, can also spur activity. There are many more events that seem to kick aquatic life into gear and these are but few, but being a good angler means a lot more than just being a good technician with a rod. That's the last part of the equation, the first part will always be viewing the entire picture to better predict where big fish are going to become vulnerable in the first place.

The bottom line is that yes; we go when we can and do what we can, but if we are truly serious about committing ourselves to catching a "real" trout, sometimes we just need to pack a lunch and wait. It seems to me that the two worst tools people use these days are their GPS and watch. Too many of us just go to a "marked spot" and if it happens it happens, but if it doesn't by about 1:00 pm, it's back to the dock with an "Oh well" Many might do better to turn off that stupid machine and look for developing spots in the water instead if dots on a screen. You'll know it when you see it, and good things can certainly come to those who wait, especially during winter. It's December and everything is getting right. You ready to get off the boat?