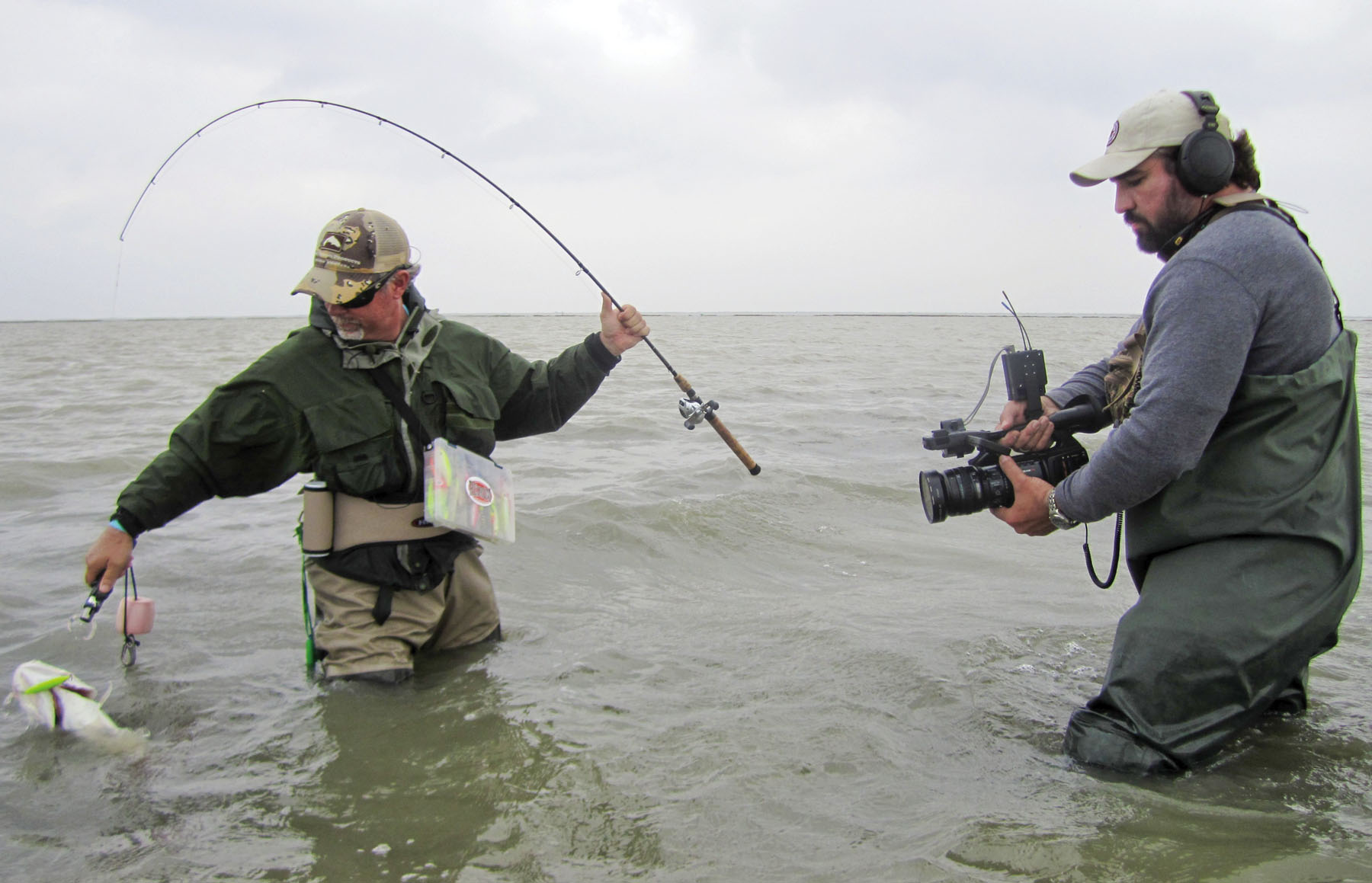 Chase captures close-up action as Mike Jones lands an eight-pounder.
The day started off right enough. Chase Smith and I were after some footage for what we hoped might prove worthy toward a ''big trout'' documentary. No stress here (!), but we were pumped and knew we had opportunity. Chase is the man by the way, cameraman that is, once part of Keith Warren's outdoor-TV production team. He came locked and loaded with some of the best equipment available, so all I needed were wading booties, a smooth drag and a little luck. We had some other local talent onboard, Mike Jones from Donna, and by day's end I watched his stick morph into a magic wand. What began with a fever ended up a fantasy; going from right to absolutely righteous, something we usually only dream about unless the planets somehow all miraculously align. Some might say it was the absolute pinnacle of sport fishing for trout, and that would certainly include me.

Chase's final video mission is unknown for now so our mission was simply to make some killer film. Twenty minutes found us walking a little knee-deep green streak working alive with baitfish; Chase's big lens shouldered and at the ready. It didn't take long to record some antics from an impressively angry fish. Within a few feet of the boat I stuck a nice twenty-eight on a Corky. She performed on cue with jumps, head thrashes and all. We were definitely on the right track. Jones was a little farther down messing with a couple of sixes and a seven and a half. We knew what we wanted was there, which was again confirmed when I had another heavy fish slip the hooks and yet another snap a leader. At least the camera saw both teases, or rather two harebrained fumbles!

The Corky swam unmolested for a while so I decided to go on the hunt with a topwater. Chase's lens soon saw a truly massive flush but no take. A follow-up cast got washed hard again. "OK", I thought, "I've got your meal ticket right here!", and switched rods to fire a Corky just behind the vanishing foam. About three twitches laterthump"a classic bait and switch sales job to close the deal. (Hey, there might be a reason I bother with carrying two rods!). She felt fair good, but after about 30 yards of wide-eyed line stripping, we began to imagine just how good after a washtub's worth of water blew toward the heavens.

Stretching only a tad over twenty-eight inches but with ridiculous girth, my knock off Boga said nine and a quarter. Heavy for sure and one of the stubbiest trout I have seen. We pulled the impostor scale against two other Bogas to the same mark, and both met exactly at the ten-pound notch. We'll just call her a heavy nine to be safe, but what was even heavier was that everything from flush to release was on film. Three over twenty-eight so far and we had also scored specimens just a few inches less. Great morning, great video start, but when somebody mentioned tired, hungry and blown-out; we all conceded and pointed the bow towards Port. As good as it had already been that's when the real deal went down.

Sustained twenty-five knots worth of southeast that kicked well over thirty at times had us running tight against the bank to protect kidneys. Bordering an otherwise trashed Lagoon, right along the shore, laid a mysteriously gorgeous clear strip about thirty feet wide. Shortly I hear a yelp, then a loud, "Wow - did y'all see how big that trout was?" Before we could respond we all saw another, and then yet another, then there was a group of three. Suddenly we passed about ten more just laying there looking like black torpedoes against the hard sand. Unbelievable! Sure, we've all seen big trout before, but how many times do we see so many bunched together? It seemed like pure fantasy but the adrenaline said it was real.

To her credit, Capt. Tricia had actually found these fish a week before. She thought they were reds at first, but after believing what she was seeing, soon had her people sight-catching several trout between six and eight pounds. Incredible; and I'm sure she will mention it, but whoever imagined a repeat? Yet there they were, crystal clear water with zero visible bait, so everything we saw moving was a trout! What were they doing there? Right then it didn't matter because we were there too.

A few screams later we yanked back on the throttle and bailed out in full stalking-heron mode. Bear in mind, we had just aggressively burned these fish pushing a knee-deep wake from Hell. Unfortunate, that, but unbelievably they didn't seem to spook. The ones that didn't laze towards the bank just sort of sat there as if to say, "SoWhat are you gonna do about it?" Almost immediately Mike Jones said, "Here comes two," with much greater composure than I could have mustered, by the way. Oh my quivering self... what to throw?

I fumbled a knot onto a clear hologram Fat Boy, figuring it had good range and a low spook factor along with extreme versatility. A big single appeared to the left, and then three more materialized near the bank riding each other's shoulders. Just like Tricia said, the bigger ones were pulling rank in the lead. What I imagined was a good cast was quickly demonized by an uncompensated, blistering side wind. A bit too close and an epic opportunity lost! They just slowly veered off, no more than ten feet away now, probably shaking their heads at such a rookie move. I see Jones tying on a topwater. For sight-casting? Do What?

"Dude," I exclaimed. "I just spooked three huge fish with a clear Corky! Whatever makes you think a topwater won't? We have unrealistic opportunity right here, right now, and that plug will blow it for all of us!"

His calm voice came through a sly smile, "Man, this is the most unobtrusive lure ever with the right presentation." I was nervously livid but, sure enough, he squatted for a shot and feathered a soft landing well in front of two big cruisers. Waiting until they got close, he gave it a little shake-n-bake followed by a simmering pause. WHAM! After wallowing in the shallow water like a dazed hippo his Boga confirmed a sweet eight pounder. The camera was rolling and Chase was grinning. My turn!

I saw a larger group ahead and a couple of singles closer on the left. Nervous indecision, I switched to a Laguna Glass TTK II, one heck of a clear-water bait by the way. Waiting for the larger group, two apparitions suddenly turned solid not fifteen feet away, easing right to left. An underhanded flip landed a dozen feet further forward. When close, a little take-away move (like they spooked it up) triggered one to absolutely jump all over it. Another solid eight made the movies. Absolutely unreal!

"Watch the back door!" Chase stuttered. "Three more coming from behind!" The scene felt surreal, akin to some type of video game, but another topwater explosion from Jones brought another loud reality pinch. Some you could see from as far as thirty yards, but no matter how carefully you thought you scanned, you might look down to find a pair at your feet as though you were a fire hydrant. Some seemed to detect us far ahead and slowly started veering off the bank. That was actually good as it gave the outside guy a much better angle than a head-on shot.

I couldn't stand watching Jones do this with a topwater so I made the mistake of tying one on my second rod. Impatient, I began hurling it far downwind during vacant periods. It seemed every time I did, two or three would suddenly appear, close and in perfect position for another buck-fever shot. But there was my plug, seventy-five away, and no hope of switching quickly enough. Back to the high percentage tail; and this, by the way, continued to work quite well.

That incredible session lasted from 4:30 till dark with many similarly outlandish catches, although waning light made for an increasingly tougher game. That's how many fish were in there! At first it was hard to tell what class of fish these really were. We see them quite often running the clear flats, but water and imagination can easily distort guesses. However, after we started landing them it was easier to compare against what we saw. It seemed we had only caught the average sized fish in there, pushing about twenty-eight inches. There were some a bit smaller and some looked much larger. Later on Mike calmly commented, "There was one fish in particular, and based on what we now know, could have easily gone thirty-five inches or better." Hey, we know they exist, so why not?

As we always should, every time we hit the water we learn new things and/or reinforce others. Here are a few I considered. There are many reasons why fish use areas, and it's not always about food nor do we always have to see bait. Big trout, against much-published speculation, are not always loners and will indeed bunch together in uncommon numbers. Many think big fish in the clear skinny are basically not catchable; yet here, almost every good delivery was literally pounced upon. Yes... we can catch them! Boats always spook fish; especially big ones, right? Hmmm. We may need to rethink that one too. These fish, even though totally plowed over, hardly reacted and were immediately catchable. Are they becoming more acclimated? I also re-learned, by way of Mike Jones' topwater, that there is a big difference between fishing and fishing well. What was also reinforced is that I perhaps only THINK I'm fishing for big fish, and that there is so much more to explore.

Epic is a worthy descriptor here, and we were actually fortunate to get on these fish a few more times during the days that followed before they dissolved back into the unknown. So, thank you Tricia, and be pleased no animals were harmed during the filming of this incredible show. As it turned out, we only thought the morning was good. I can't wait for Chase's final deal, but we'll get on some more, and here's hoping you can as well. Manthere is so much left to learn!