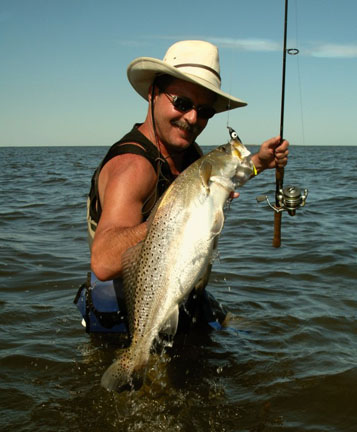 Squinting into harsh evening glare, I could have sworn the plug “humped” against the swirl of a large predator. Anticipation jumped even higher as what seemed a million ducks exploded from the flat.  I let the big bait sit for a five count and then thrashed it side-to-side three times. After another long pause it vanished into an unimpressive foam ring. Reeling frantically to catch up, still not sure what I had, the headshake suggested the lure had slipped past the brutal reds that dominated the area. She went about seven and a half pounds, one of several good trout that day…life can be large in Port Mansfield.

When you’re searching for a topic, your current passion is always the best storyline. Right now it’s all about banging up big fish with big plugs, the likes of which I haven’t enjoyed for years. For whatever reason, and I’ll leave speculation to the scientists, it’s been everything any big trout enthusiast would call in sick or miss an anniversary for. Since September, Lower Laguna trout of this class have been more numerous and heavier than experience says they should be.

A few months back I wrote a piece that I titled “Size Matters” and touched on the benefits of downsizing presentations for more consistent action. However, we should also remember, “to everything there is a season,” and despite all of that important finesse stuff, I had forgotten how productive throwing a big plug can be. Autopsy reports (always a worthy endeavor at the cleaning table) told me to go bigger. The forage was shifting toward large finfish with many specimens so ridiculously stuffed it was hard to understand why they still took a lure. Out comes a dusty Rapala X-Rap Walk 13, the big boy of the Skitter Walk family.

This bait measures a quarter of an inch longer than a full-size Spook, has a meatier profile and weighs in at 1-¼ ounce, a big ‘un for sure. Being an inveterate tinker, I was OK with the 1/0 treble up-front but the feather-dressed rear hook had to go. A 2/0 Gamakatsu sans hackle loosens the action quite a bit.  It takes a rod with backbone to chunk this bait and the green All-Pro APM1 from Fishing Tackle Unlimited works great.

Braided line is a tremendous help in spanking this plug, a must-have at long distances and in heavy chop. We’ve used them all and nothing competes with Sufix Braid in either 3O/8 or 2O/6. A double Uni-Knot splices well into a rod length of Sufix 2Olb fluorocarbon. A loop knot, which I rely on for everything I throw, finishes the setup.

The first criterion for hunting big trout with big plugs is obviously to go where they live. And while that can be virtually anywhere, I prefer safer bets. Here are some guidelines that have worked well in this environment at this time of year.

Focus on shallow, broken bottom near deeper water, before and after hard northers.  Shallow is relative and here it means knee to thigh deep near tapers or other drops.  “Broken bottom” simply means variations of structure; little moguls, depressions, and grass/shell/sand or mud mixes. Big trout are different animals, and if I’ve learned anything, it’s that they like a lot of “cover” with good escape routes.  Depending on weather, spoil bank edges, shorelines with good drops, and areas where back lakes taper into the Laguna proper are prime. Each of these will have sweet spots within sweet spots depending on conditions and getting on the right line or at the right depth is critical. I’ll zigzag back and forth until I get a good blow, then concentrate on that level. If you’re a hunter you’ll feel it when you see it.

Yes we want to see mullet, but not necessarily fish the biggest concentrations. I’ve had better luck on the edges of bait masses where there are scattered pods or perhaps a few occasional flips.  A lot of times the dinks are in the bait masses and the bigger ones are hanging off to the side until they charge in to feed.

Water clarity can also be anything but I do like to see at least a few inches. Crystal clear water works best during low light and sometimes where there is heavy cover. In areas that range from clear to murky to muddy, I’ll take the murky.

One thing about big trout this time of year…where you find one you will usually find more. When you find them, though, you need to keep quiet about it.  Otherwise, you’ll be going hunting for more. Find what looks good, commit to it, and enjoy the results.

Retrieves are subjective and everybody has their favorites. With this mambo mullet-looking plug I’m pretty consistent no matter the conditions and it seems to work. I like to make some exaggerated rod movements but only pop a little slack out of the line. With the rod tip up the head rises and I can get it to throw water in a good 18O-degree chopping motion. I’ll jack it like that a few times, moving it only a foot or so forward, then let it sit. It’s kind of like calling them up with some aggravation and then giving it to them. Most of my bigger fish have come on the pause, but there are certainly other opinions. The smaller ones will often crash it or blow it three feet into the air, the truly mature feeders often forego that nonsense and simply suck it down. That’s why watching it is so critical. If you get a good swirl, but didn’t sting her, she can still be caught with repeated casts.

As with any lure, the hookset is critical. The hardest thing to resist is the instinct to yank on the visual. When you see the take, just reel down to the weight, and if it’s there lean back smoothly. If it’s not, you are still in the strike zone. With braided line a Bruce Lee move is not necessary.

January potential, down here anyway, is no less than awesome. All indications point to one of those big trout cycles, so it’s just going to be a matter of getting out there and going for it with the faith that it will happen. Trust me, I fully understand the danger of talking a bunch of smack, but I’m that confident. Don’t think that pitching a big plug has to be an all day grind for a trophy either. The lesser fish are tearing it up as well; it’s just a matter of going through them.

The sport in all of this is the enchantment of the chase and thrill of fooling nature. Life is already big down here and will only get bigger as we go through the winter. Let us temper our success as W.C. Prime urged way back in 1888, “It is only the inexperienced and thoughtless who find pleasure in killing fish for the mere sake of killing them. No sportsman does this.”