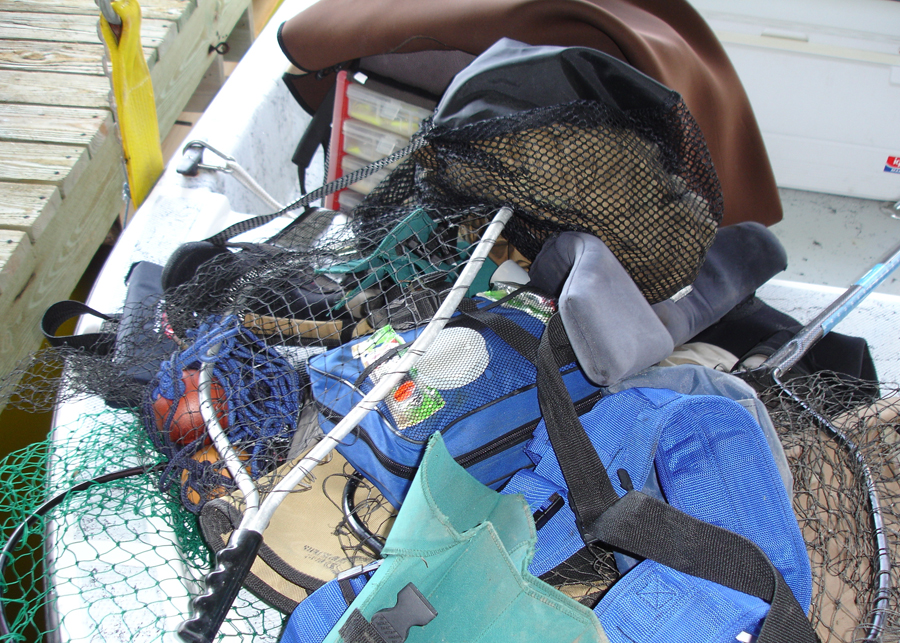 It's interesting how small mental snap shots of past adventures, even if seemingly insignificant at the time, can occasionally replay themselves as something entertaining and informative for tomorrow.

About 25 short years ago we were throwing MirrOLures into the gently rolling swells of the Pacific; hoping to hook some of the same angry roosterfish that the locals were battling steadily. It was near the Mexican town of Playa Azul, and despite having all of the latest store-bought accessories, we were being schooled by natives using hand-carved wooden paddles for reels. You've seen the technique, possibly at a jetty near you.

After watching curiously through the morning's episode, one of the locals finally offered a few words of advice. "Senor," he said with awide silver-toothed grin, "Mexican fish are not stupid like Texan fish. They are not fooled by those false things you bring." As he turned to reset his hand-held line his parting salvo was "No les gustan los plasticos," or rather, "they don't like those plastics."

OK - fair enough, and granted, only a few of those roosterfish liked our particular 'plasticos' that day; but there's more. For years I tried to analyze that small moment in time for whatever it might have been worth. Quite simply, that guy and his amigos flat owned us that day. They hauled in fish after fish while we hardcore urbanites struggled. If I pretend to have any snap or humor in me at all, he also has a little ownership in me for tomorrow. Here's a few assorted 'pictures' taken that day from the lens of a stranger in a strange land, and perhaps how they might apply when fast-forwarded to Port Mansfield, year 2007.

When in Rome: There is no doubt that there is little which can replace local knowledge when it comes to fishing. In earlier years I personally thought I could take what I thought I knew to most anywhere and do well. Then I moved down south, and after fishing almost every day, quickly learned more about what I didn't know.

We'll use Port Mansfield as a small example, and because we entertain experienced fishermen from all over, we get to see just how tight regionalization can really be. Every body of water is a little different, and what works there doesn't always work here and vice-versa. For example, the Laguna is not a mullet-based fishery for trout in my opinion. When it comes to forage, we have many diverse species living in this grassy environment, and those magnum-sized lures we throw farther north aren't always the best choices for here.

It's far too easy to stick with what we know, but our comfort zone may not be where we want to stay either. I've actually hit control-alt-delete and put up several gallon baggies of big plugs that just don't seem to get bit here like they do only a few miles north. Whether it's a trip just down the road or to another coast line, it may be wise to consider what the locals are thinking. One trick is to check the neighborhood tackle stores and see what is stripped off of the racks, or, see what is kept strongly in stock or, walk the beach for a bit before you get embarrassed.

Worthy prey: That statement from 25 years ago, "Mexican fish are not stupid like Texan fish," can get downright philosophical. We know fish are not really smart; they are just instinctively reactive, so perhaps that toothy-grinned piece of tanned machismo was politely questioning our intelligence, not the fish's. However, there was actually an air of respect in his translation. They did accord their prey a certain reverence, and as much fun as we have in the recreational sense, these guys were fishing for much more than that. It's called sustenance.

Despite the intensity level we try to assign, there is a large difference between wanting to catch a fish to mount and needing a fish to eat. I wonder who might be more intense. However, when I think of how we have evolved as 'privileged' fishermen, only to slap fish up on nails for ego-enhancing photo-ops, I also have to wonder what the 'natives' who have a good deal more at stake think about the whole thing.

It's always interesting to me how people who fish for food only take what they need, while some in the sport ranks believe it's OK to take it all. Showing off, as has been written and as we do, is really just the idiot's version of being interesting. Let's try not to do that.

Minimalist. OK- enough of the serious stuff and on to the humor-be-us part. In looking back on those local experts, I can't help but see the precise gear they had to work with and the fine fishing apparel they chose to model.

The gear was probably thirty-pound line wrapped around an artistically carved piece of seasoned one by six. Their official fishing clothes were probably the same ones they wore to work on their palapas. No wading belts, no quick-dry clothes, no stringers, no stainless pliers or Boga Grips. As a matter of fact they were bare-footed, and when a fish was landed, they buried it in sand to keep the varmints off of it until it was time to take their catch home. We're talking extreme minimalism here, and it's hard not to laugh at ourselves sometimes as we pile out of our boats today, or more exactly, as we did yesterday.

In typical 'advanced' fisherman fashion, I had yet another group who brought so much 'stuff' with them that it actually impeded their fishing much more than it enhanced it. After tripping over tackle boxes, meshed bags, cleats and clod-hoppers, the chore of getting into the water to wade wasn't nearly as entertaining as watching the group trying to get back in.

Among the inventory were over-sized landing nets, pull-behind styrofoam shark nets, sting-ray protection resembling Lance Armstrong moonraker boots, fanny packs, butt packs, chest pouches, three pole holders, back braces, etc., and all of it wrapped tightly around over-stuffed waders. No wonder they were whining because wading was 'taxing' after a couple of hours, not to mention the numerous backlashes they had by snagging some of that stuff on a back-cast.

Essential gear means different things to different folks. All I can say is that I couldn't compete with a hand-carved chunk of wood that day in the Mexican surf, and I don't think I saw them trip either.

What's the moral in all of this rambling? There may be at least three. One is when we travel, take what we know - but go to know more. If applicable, listening to our guide may be a reasonable option, possibly even above listening to our own ego. Two, is let's try not to forget why we fish, what we are trying to get out of it, and that it's really not all that serious where life and death is concerned. Three, is that although we have the privilege of buying a lot of wonderful stuff to help us be better fishermen, we can't actually buy what we are looking for. It's humorous, but you know it's true, that the less fish we are catching the more stuff we buy. Yes, we like 'stuff' too, but I'd like to challenge some of the accessory manufacturers to keep their R & D department inspired and keep looking at better ways to streamline some of this 'essential' gear. If people are tripping out of my boat, and the Playa Azul guys don't need it, we're not quite there yet. I'm not in Mexico either, but I sure am thinking about it.