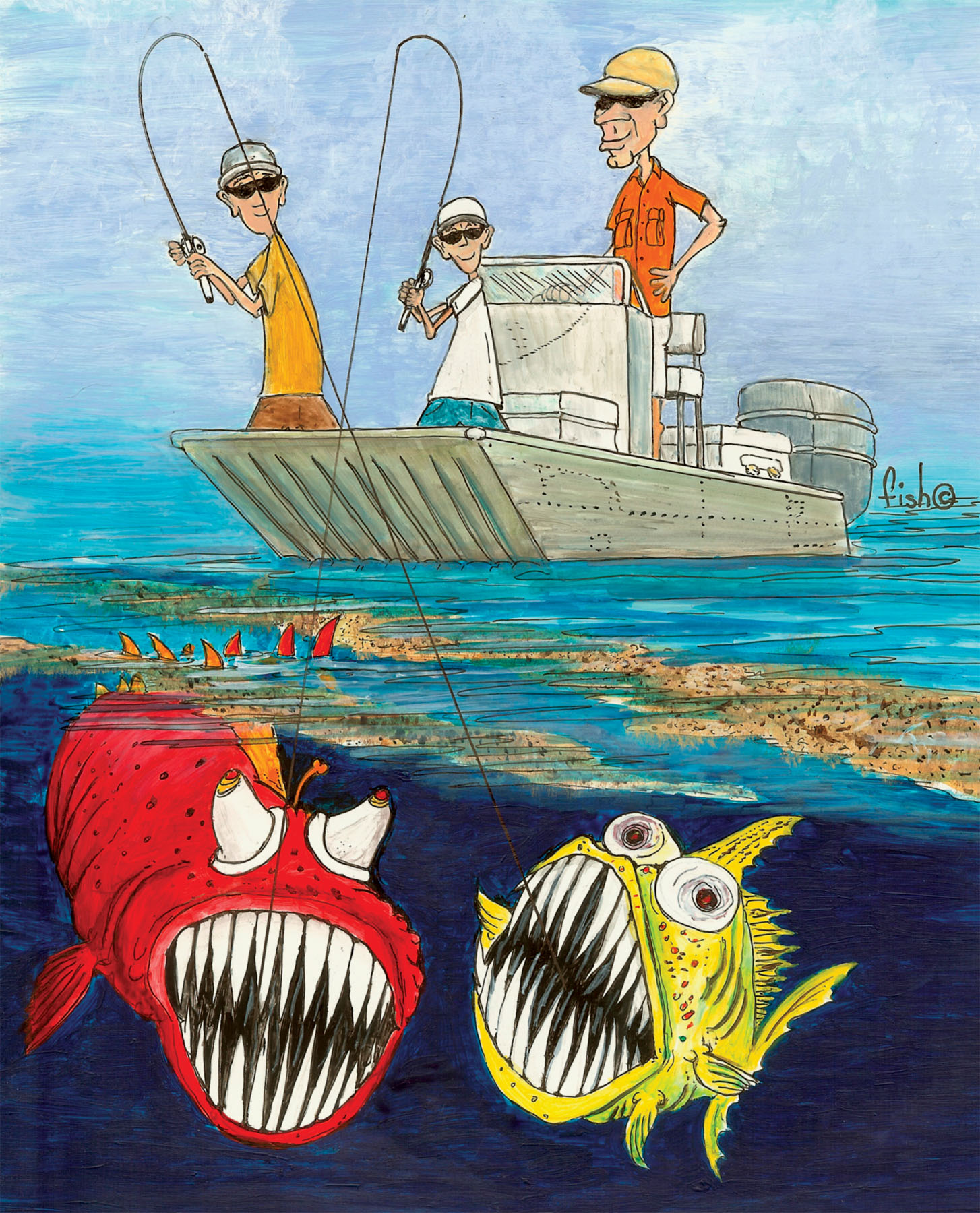 There are certain aspects of male behavior that will probably never change. Macho and stupid are two of them. Television programs such as The Man Show, Man Cave, and Survivor Man make some attempt to explain this. These traits exist in all of us to varying degrees and they go way back. All the way back to when we danced around fires, painted ourselves blue, and wore funny-looking bones in our noses.

This story has some relation to a man show, at least in the way that it might explain how my sons and I became messed up the way we are. This is about a man and two boys in the quest of great outdoor adventure, and things like this really do happen, even more perhaps than "domesticated" men may care to admit.

The year was 1994 I think; and I had an eleven and eight year old boy in tow ready for any kind of adventure dad could put them on. We shared many inspiring times together; like sitting in bay water up to our necks during tremendous thunderstorms and casting only when it was "safe" between bolts of lightning; and the times we chased waterspouts because we had a fast boat and we could. This particular adventure was more than great and I take all responsibility and blame if any are due; however, I also want credit for teaching my boys to be "manly."

At the time this took place we fished out of a pride and joy, garage-built boat. It was an eighteen-foot aluminum that in another life had been rigged out as some sort of Louisiana outlaw airboat. Hours upon hours, hammering rivet after rivet, we transformed it into a sure enough fishing skiff using pirated uni-strut for deck supports, discarded street signs to cover the skeleton of a homemade console, and even dumpster-dived aluminum brackets to create a sturdy ten-inch setback for the motor. It was topped off with an aged but faithful seventy-horse Evinrude, a stump puller for its size and capable of pushing the little skiff to Miami Vice speeds or at least we pretended as much. We called it the Gray Ghost, and it provided many an outdoor adventure, including a vacation to Florida that was more than a little Lampoon-like with me standing in for Chevy Chase.

Anyway, one Sunday morning, ditching church and sneaking the boys out of their mother's watchful care at four in the morning, we struck out to our favorite place, across the bridge to paradise at the San Luis Pass K.O.A. campground. We launched and quickly frolicked on the outer bars, wading and catching some good trout plus a few drag chewing redfish on topwaters.

It started when the doldrums set in; no more breeze, no current, barely enough air to breathe, no more bites. "Come on Dad, take us out to the big pond, look how calm it is. Come on dad, let's go!"

Having experienced some success on an earlier trip, we threw the cast net and loaded the boat with big menhaden, then set out for the great unknown with trout tackle and our "big rig" 6500 Ambassadeur on an Ugly Stick. We stopped and changed water every couple miles until we had an ice chest full of frisky bait any self-respecting potlicker would die for and we nearly did. But first to die was a blacktipped shark of a mature six-feet that we eventually dispatched with our trusty .40 caliber Glock, but not before an hour's chase through other fishermen who screamed for cutting up their chum-lines. The day was made and I should have stopped right there; but we yielded instead to primordial sirens calling for blue paint.

With the shark boated, cheap binoculars peered intently for other opportunities. Like a shout from Magellan's crow's-nest, Brandon, my oldest called out, "Land Ho," and we gunned the tiny boat toward the biggest weedline I'd ever seen. It looked like a great skinny island and was working alive with all manner of sea creatures. Schools upon schools of multi-colored juvenile somethings fell in behind the boat, and chicken dolphin were cutting it all up with their showmanship. There went a good-sized ling and suddenly a number of sharks cruised the sargassum; it was incredible and it inspired us.

"Hey guys, watch this," Brandon squealed making a sight-cast connection with another six-foot-class blacktip. The old Bantam 250 protested but gave up all its line in less than thirty seconds. Some of the fun was throwing at tripletail lying in openings amid the clumped weeds. The go-to bait was a weedless seven-inch Bass Assassin and the fish ate them up. Leaving the weedline we found a cluster of pallets and Mexican flour sacks and the decapitated head of a giant baby doll floating with them. The old Blakemore Double Trouble proved irresistible to more dolphin and a sizeable ling that hovered beneath the flotsam. To the kids it was off-shore fishing in the little boat they helped build, real David and Goliath stuff, and it would only get better.

Binoculars guiding us, we continued seaward to weedline after weedline, oblivious to any danger Neptune might throw at us, or worse yet, unconcerned with whatever their mother thought we might be innocently doing. Mind you, there was absolutely zero wind and not even the hint of a swell, one of those days where the surface melds to the sky. On one of the distant and forbidden weedlines we were awed by hundreds of dolphin fish greyhounding like bait, some unknown sea monster upon them.

Miles further, elongated forms rose from the sea and we surmised them to be free-jumping sails. Occasional king mackerel shot straight up like possessed two-by-fours, fully twenty feet above our bare feet burning on the Home Depot carpet glued to the little skiff's deck. It was a rare display of nature and for that moment the boys and I were the only humans. Weedlines farther we hopped, each one fulfilling fantasies for the giddy lads safely in their father's care. The last check on our hand-held GPS showed 28.6 miles southeast of the San Luis Pass Bridge out to sea in what amounted to a jon boat made minimally seaworthy with make-up.

Every hold in the boat had been jettisoned of original cargo in lieu of fish taken aboard. We threw out and re-arranged everything to make room for the bloody bounty we were reaping. It was awesome and we sang the man song. Then the scenery started to change. A couple of ocean-class shrimp boats began powering by, some we thought were rude in their closeness, some we thought were cool because they tooted their horns. High-fives we thought, presumably for the boys bowed up on the bow so far from shore in a little tin boat. Little did we know they were fleeing for their lives. A stalled front in the middle of the state had picked up steam.

"Dad, wha-what in the heck is that?" Brandon stammered handing me the glasses.

Like something out of Poltergeist, a demonic wall of shrieking wind and slicing rain was blasting toward us. Mercury-calm water was rising instantly into three-foot chop. In another instant it rose to fives with kicker eights.

"Oh my God, this ain't good. Get your slickers on and put your life vests over top put the rods up. We're gonna have to ride it out boys. Brandon, throw the drift anchor off the bow DO IT NOW... HURRY!"

Stumbling with the billowing sock, Brandon's weight was too much on the bow. The crest of the first big one smacked hard and rushed over us, right down to the blood-spackled deck. Awash in a foot of water we pulled the plugs and sparked the little Evinrude, headfirst into the teeth of the tempest.

It was unthinkable but it was happening. The weather man had given no indication of this freak norther barreling through, but in a philosophical "wherever you go, there you are," moment, we were now smack dab in the middle of where we were. Brandon took over navigation and grasping the little GPS with one hand and the console railing with the other. Blinding rain made each wave a predictable surprise. Tacking hard to meet the next swell, the bow would stall nearly vertical as we waited for the elevator drop into the abyss that followed. Down in the trough, all that could be seen were gray peaks on either side, and some of them were starting to break. Patrick, the younger, had taken refuge between my feet and the console, hat pulled down in an imaginary state of protection.

We battled the peaks head-on for fully three and one half hours. With every timed push of the throttle we gained a few precious yards against what the next one would take away. We noticed a crack growing in the gunwale just forward of the bow sweep, probably from the hundreds of blows taken in the angry troughs. The whole forward section of our Gray Ghost began flopping like a pancake, but the GPS said we were making headway, only six miles to salvation. An equal problem now was the fuel tank tapping hollow, six miles might as well have been sixty with the zigzag course we had to abide by. Finally the bridge came within sight, and inching ever closer, the sea began to subside.

As we roared through the bridge pilings, groups of displaced beach fishermen were reconnoitering their gear in the aftermath of the blast, staring at us like the idiots we were. Some were clapping at what they knew had to have been. Patrick finally pulled his hat up above his ears.

Back at the dock and then safely on the road, we refilled the tank for the next adventure. We were proud to say we had a gallon and a half left you know, just in case. We heard that Jamaica Beach recorded gusts of sixty-five miles per hour, and that several boats had been breached and rescues made in Texas City. A freak early norther no doubt, and without question a close call of idiotic proportions.

"How was your day honey? Did y'all make it to Whataburger before that bad storm came through? Did you bring any fish home? "

"Yes dear," I lied to my lovely, now ex-wife (go figure). "We had a great day. Everything's fine and we brought home much food for the fire."