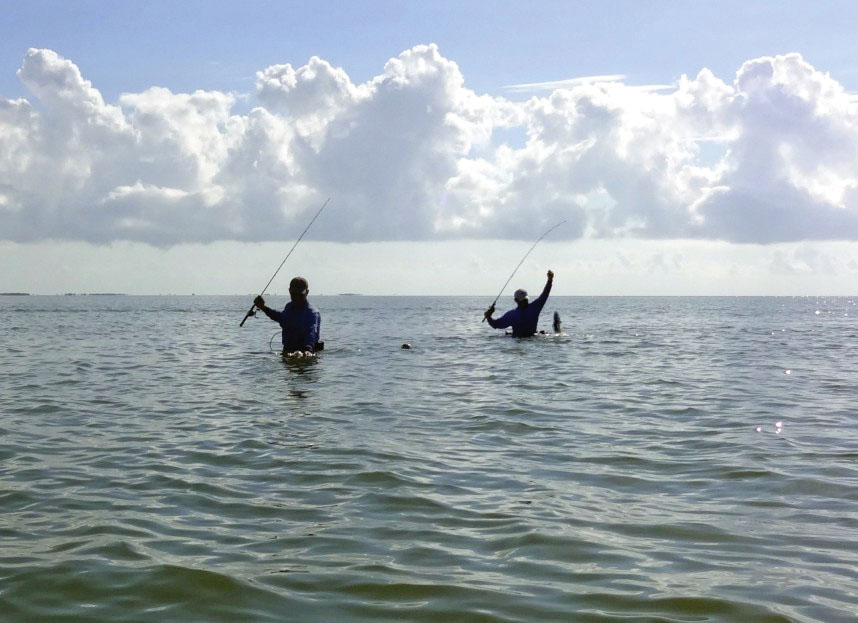 Angler or fisherman? (we can make it happen or wait on it)

It has been said that one of the strongest human instincts is to impart information. I can think of a few stronger but we do have to laugh because we know we are always willing to promote our personal interpretations about how the world turns. We all believe we know what we know, but how much do we really? How much is actually learned and how much comes from what basically amounts to urban myths passed on from barstool to barstool? Let's look at a typical on-the-water interpretation, and see where we are in defending our hard-won but highly-opinionated fishing facts.

"Hey captain, don't you think we should move? I mean I've been to countless seminars, bought several DVDs and books, and any good fisherman can see this is just wrong. There's no bait, the big fish aren't going to eat lures anyway, because they have already spawned, lost their teeth and have the 'sore mouth'... Plus those porpoises have already run off whatever was here."

Well, not to discredit good intentions, and aside from so many sources being unreliable, thank-you anyway as the information is still fascinating! What is actually more fascinating is how we humans always try to explain away what we don't understand. Mysterious always deserves good explanations, so myths are created and handed down for generations, serving our ignorance quite well. However, despite all available science, many fishing myths continue to thrive and are often conveniently used to explain our failures. Some are funny, like bananas being bad luck and, fish bite least when the winds from the east, but others are out and out dangerous. Out of hundreds, here are a few of my favorites to ponder. Trust me being a guide can be fun!

"Man you're just stupid to release that big trout. Everybody knows they won't live, that's why they're called weakfish!"

Unfortunately, I think a lot of misconceptions have ulterior motives; namely, handy excuses for certain curious behaviors that involve ice chests. The truth is that there are newer studies which are readily accessible and show quite a different story. We all might be surprised to read the facts: http://www.harteresearchinstitute.org/ochealth-research/catch-and-release.

"The big trout are skinny now because they're all spawned out."

Actually, seatrout are classified as fractional pelagic spawners, meaning they are capable of spawning many times and in as many places, March through early-October! Yes there are peaks in spring and fall, but the reality is that they can continuously develop and dump roe the entire period. They may be skinnier in summer but not because they're all spawned out. There is a lot of good information available from a variety of state agencies and universities should any wish to update their facts.

This is one of my all-time favorites! How many have actually seen trout eggs, or ever bothered to understand the dynamics of the whole process? Even if a croaker was interested in eating something the size of a pinhead, a trout couldn't care less. They are "spew and go" animals, meaning they don't prepare or guard spawning beds, don't protect their young, nor care anything about them except perhaps to munch on one themselves. Amazing that we still have sportswriters and fishing guides riding those mythical barstools. A trout eats a croaker for the same reason a lazy lion will eat a bleating lamb tied to a tree. Hey you called?

"Dude, ya gotta use bait because they're not going to eat lures right now. They've shed their teeth and have the 'sore mouth'."

Well, how fun to have another excuse, but trout do not shed teeth. And if they do loose one, just like us, they don't get it back. All myths have a lot of purposes and this one works well when we can't catch shit on lures. Makes my mouth hurt.

"Windward shorelines are good because the bait gets pushed in there."

Most myths, as does this one, do have some element of truth. True baitfish could well be stacked on that wave-wracked shoreline but not because it was pushed it was pulled! Wind pushed other stuff up there; zooplankton, phytoplankton, algae, etc., which starts the food chain moving, which then draws the baitfish in. Other reasons why windward shorelines can be good are as understandable as increased feeding activity due to increased water level, greater oxygenation, increased cover (see also: clarity and color changes), and current. Push me there if you have to, but no self-respecting mullet can resist a windblown situation.

Yes, of course everybody wants to see active baitfish on the surface. However, what we can't see is all the other forage available down below; shrimp, crab, pinfish and myriad other tasty critters. Just cuz we are not seeing bait up top doesn't mean it's not there below. Mullet, for example, will often stay down and suspended. I'd really like this one to continue though, as most boats will pass me by thinking I'm just stupid and messing around in dead, dirty water. LOL!

"A good fisherman has to have a lot of patience!"

Sorry, but this is my absolute favorite. And in fact, the exact opposite is what fuels my whole obsession. Let's use the term high anticipation instead! That patience thing comes from believing you have to sit somewhere for hours until some hungry fish comes along and finds your bait. This is a sedentary or passive style of fishing. Hey, there's certainly nothing wrong with that if you like a good nap, some sun and cold beer to go with that nibble! However, give me that hunter style of fishing... where we go out and learn everything we can to better predict fish movements and responses, and then go make something happen under any conditions we encounter instead of just waiting for it!

Here's another little quote that helped shape my whole direction, and indeed, along the lines of what this whole read is supposed to be about.

"An angler, sir, uses the finest tackle, and catches his fish scientifically - trout for instance - with the artificial fly, and he is mostly a quiet, well behaved gentleman. A fisherman, sir, uses any kind of 'ooks and lines, and catches them any way; so how he gets them it's all one to 'im, and he is generally a noisy fellah, sir, something like a gunner." -Dr. George Washington Bethune-1847

The "scientifically" thing captured me. I'll admit I'm an information junkie, and of all the things I could have done in this short life, fishing has given me the highest excuse to dive in and try to discover the wonders of the world on a personal level. Think about it! As an "angler" we get to explore and use almost all sciences! Besides trying to understand the obvious predator versus prey behavior, all sorts of physics are involved as well concerning water, wind, temperature, and even our basic equipment. Mathematics is also huge, trying to calculate our highest percentage efforts and such. Never mind meteorology as we all have to become expert weathermen. And what about chemistry; with salinities, dissolved oxygen, and all sorts of other factors.

For me the whole game on the water is exploring, discovering, and using science to pit ourselves against eons of a fish's survival instinct. The whole reward is just being able to "call it" more often, and to me, paints the difference between an "angler" and a "fisherman." Angling hunter style makes life more interesting, and some of us even base our whole existence on the exercise.

This wasn't meant to be a primer on myth-busting. We will never know it all and everybody is entitled to their "facts." On a higher plane, it's supposed to be more about using the water to fuel a love of learning and knowing that what we have learned is real and can be used over and over. It's another way to help dry land make more sense. However, from what I'm seeing, it all seems to be a dying art these days as modern society appears to prefer want easy information for quick results rather than earning a merit badge.

There is one more quote that moved me long ago, something about "If you want a good ship built, don't just teach the workers how to build it, teach them to yearn for the vast and endless sea." Perhaps that's more of what we might want to be teaching our kids and new recruits. Maybe then they won't have the sore mouth when they share what they've learned, and fish will become much more than just meat because they discovered why. Hey, we can always go fishing but let's get off that stool and go angling instead. There are real myths to be caught if we'll hunt for them!