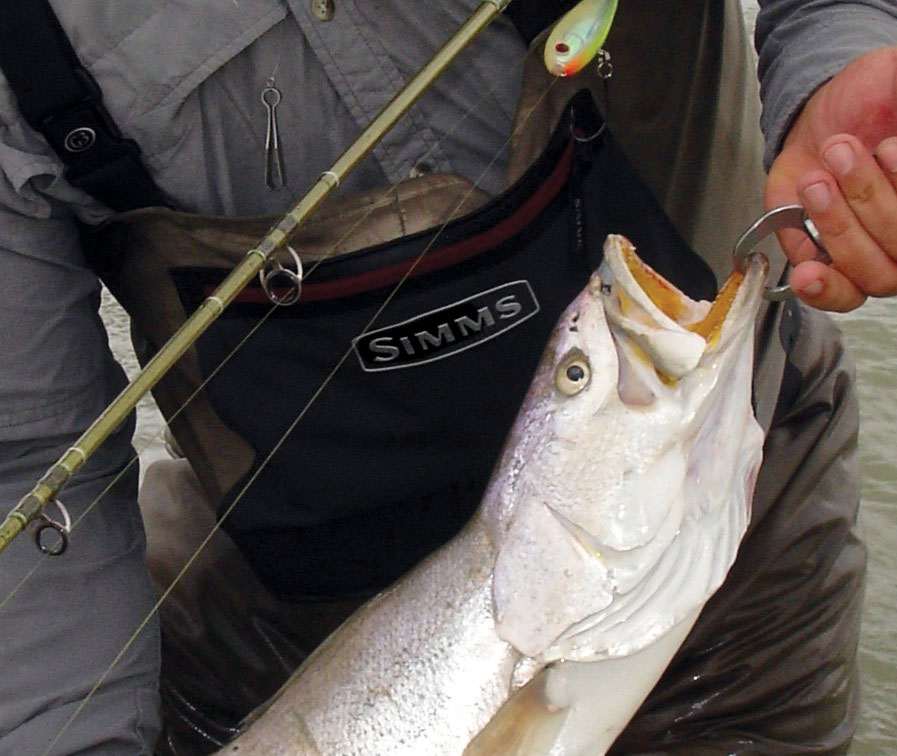 A poor workman blames his tools, but I don’t think we have that excuse anymore.

No sound can drive me into fetal position quicker these days than that of a magazine deadline whooshing by. Our esteemed and beloved editor (who I sometimes refer to as our editorhole) fires me at least every other month for it. But trust me, after talking about the same fish for ten years now, the question increasingly begs, "So what in the heck can you possibly write about this month? What topic hasn't been trampled to nausea and what story angle might actually prove worthy of print?"

While struggling yet again for something "fishy" to write about, I figured nothing could beat being in the actual setting. So with laptop aboard I sputtered towards an isolated flat for some divine inspiration. I set up a little waterborne "office" of sorts; a cardboard box duct taped into a makeshift sunscreen, with one ice chest for a chair and another to glide the mouse. The whole episode turned into an interesting, if not comical, observation.

There I was, in nature's private realm with no other humans in sight, surrounded only by sights and sounds of "Planet Earth" proportions, yet right below this panoramic view an out-of-place computer screen was winking at me from deep inside its cardboard lair like the blue eye of an alien Cyclops. I glanced away from its evil stare just in time to watch an osprey nail an unaware mullet, then winced as I envisioned what was going to happen to its still flopping flesh after the raptor landed on its favorite pole by the shoreline.

I couldn't get the internet to connect, but no worries. I just checked the radar on my Blackberry instead. Might as well glance at an email or two. I did, and with a free hand reached into my new Yeti ice chest for another Starbucks can. I marveled that the same ice was there from three days ago. I subconsciously hit the Power Pole remote to drift closer to some tails waving seductively near a manicured duck blind; another scene that looked like an embellished painting at a CCA auction. Another osprey crashed, and away went another mullet on a one way trip to the stripping post. What a contradiction; it was high-tech wishing watching low tech production, and those "low tech" ospreys were easily getting their limits without any new and improved gadgets on sale near you.

It dawned on me how silly all of this was as compared to how the guys before us had it. Although I was where humans could hardly access just a few decades ago, I was painlessly there and also with just about every convenience known to man. I started thinking back to even when I first started getting serious about fishing, and had to wonder if I was really all that much better now with all the "stuff" we have today. A poor workman always blames his tools, but I don't think we have that excuse anymore.

I thought about how effortlessly I had arrived where I wanted to go by GPS, and laughed at how we used to put reflective stakes in the water and navigated by night with speedometer, stopwatch and spotlight. You had to actually know your areas by line ups, and when visibility was poor, by pole or foot probes. That, of course, was after you tried to get the outboard oil mixture correct and hoped you didn't smoke like a Japanese destroyer or foul the plugs by getting too heavy handed.

I remembered how, before each trip, hours upon hours were spent on the art of perfectly sharpening hooks, especially new ones because they were as dull as thumbnails out of the box. Now I just reach over and grab a box of Gamakatsu's and hope I don't breath on them too closely.

Being sore after fishing was a given, as those old seven-and-a-half foot fiberglass popping rods made quick work of reducing back muscles to raw sinew after a day of two-handed casting. I don't know how we ever felt a fish on those things, much less with 17-pound rubber band line spooled on 5:1 ratio reels. Now, with recoil guide rods like Fishing Tackle Unlimited offers (which probably weigh what the line used to), and braided line on nine bearing auto-casting/anti-backlashing reels, the only thing left to be sore is your pride if you still can't feel a bite.

I thought about how a tail was really a tail and that a Kelley Wiggler shrimp in strawberry and white and was all you needed. Now simple primary colors have given way to a kaleidoscope of confusion, and of course, the fish must know we are confused as well. We have to be, because now we have genuine artificial shrimptails that smell like a dead goat and water activated topwater lures that croak like a croaker.

Riding out a norther with a five gallon bucket over your head was standard because you never knew exactly when one was going to hit. Actually, that may not be so much better today, as most weathermen still seem preoccupied with mixing their own oil, but at least now I can pull up radar on a phone. Speaking of phones, I well remember having to march five miles out of a mosquito laden marsh on one occasion and across a sun baked San Luis Pass Bridge on another, all the while scrounging for road change to feed a payphone that might or might not work and try to call a number you might or might not remember. Well, at least now I can Google up walk-out directions.

The elements were actually life threatening before products like SIMMS, as leaky rubber boot footed waders did about as much to ward off hypothermia as did brittle yellow jackets with ridiculous amounts of wet cotton stuffed inside.

Besides all of the conveniences we have now, I especially remember how you knew where fish were and what they were eating because you went out and fished for them in the water. Now most people just fish for them on the internet and pair up reports with full-color aerial imaging down to pothole level.

There is no doubt that we need most of good inventions out there today. If nothing else, we'd look like outdated goobers at the ramp and be able to blame bad days on not shopping like we should. However, although we might be able to buy some better results, we will never be able to buy skill. Skill will always be "knowing when to be where." For the most part, that is not for sale. What is for sale is fuel, probably the best investment towards being a "fishermen" as we could make. All I can say is; many men before us were great fishermen and caught many great fish without most of the tools we have today, and the osprey's catch ratio will always be better than ours. Let's put that in our Google tool bar and Gulp on it. Go fishing and learn by efforts spent. The birds would be proud. Ooops, there went that whooshing noise again.