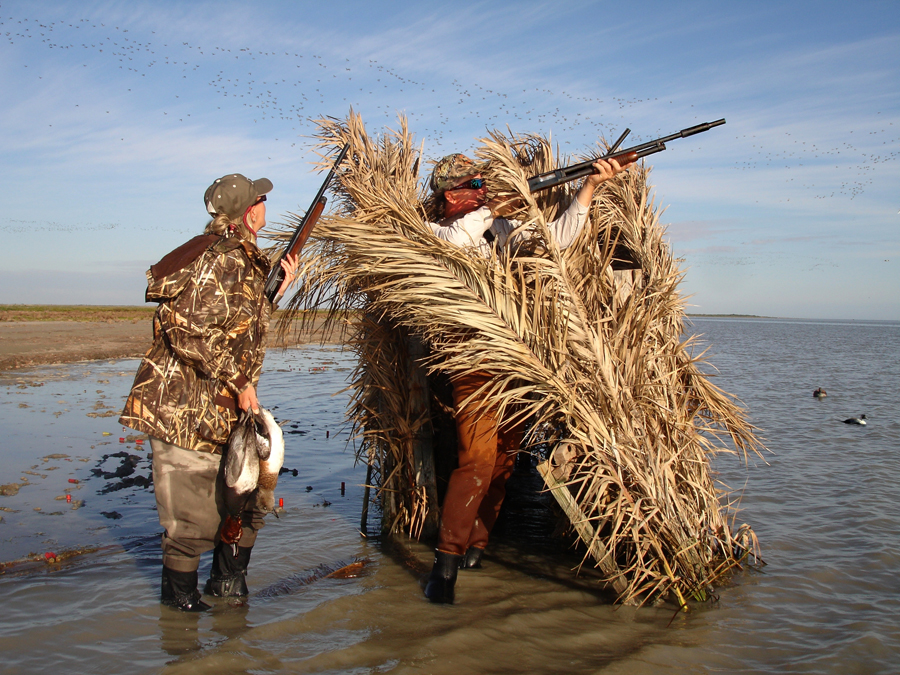 It’s easy to understand why the Game Wardens have such a good time out there.

I grew up shooting lead over cactus, not steel over mud; so I won't be wearing a "Pro-Waterfowler" patch anytime soon. Besides, I kinda figure that you can only be really good at one thing at a time, and quite honestly I'm still working on that. However, now that fifteen minutes is the only thing separating the back door from a sky full of feathers, it may not be unreasonable to pull back on a trigger every now and then, especially when you can take your fishing rods with you. We're talking about the Cast & Blast thing, and new to it or not, opportunity for this type of mixed adventure abounds on the Texas coast somewhere near you. We might as well play as hard as we can for tomorrow we die, or so that wonderful excuse goes.

My counterpart, Capt. Tricia, is mad at things that fly. She is constantly on me to humor her in the field of her choice. I've learned to heel to the command of "Come on let's go" coming from any female who will outgun you with a Youth Model 20-gauge. John Tolbert of Drifter Technologies happened to be down visiting, so we were primed for yet another waterborne diversion. He is also new at ducks, but game for anything smelling of outdoor camaraderie.

Some of y'all might remember John from last year's Houston Fishing Show. More on John later; but for now I'd like to say that thanks to John's invention, when I finish a long wade the boat now comes right to me like Roy Rogers' horse, Trigger, all with the simple mash of a button. The art of wadefishing just escalated, but for now, let's get ready to jump in an airboat with guns, reels, and a little last minute misguided enthusiasm.

"Got a Federal duck stamp John?"

"No" came an over-the-shoulder-reply as he shot out the door to the nearest source, a mere ninety minutes away.

"Tricia, where are those hollow plastic ducks?" As a kid I remember the old-timers using decoys made of wood and cork.

"Steve's got 'em," she said over the sound of a shotgun action slamming shut while already looking at new and exotic recipes on the web.

"Well, he's got three big dogs too, but I'll try to get 'em" without getting bit."I did, and by the time I clattered home with four bundles of mono-entangled decoys, John was legally back.

"Got a weapon John?"

"No," came with an of course not look.

"Oh quack, Tricia's dad, took everything with him on his yearly Alpine hunt."

We dug in the archived arsenal and found a well worn, dusty twelve-gauge. It was an old perimeter guard gun from the Korean War, complete with a recoil compensator on it which would later prove to direct the muzzle blast side-ways in a most thunderous pattern, blowing off hats and dislodging carefully placed palm fronds from the blind.

We were almost ready, right after messing with uncooperative running lights, a stuttering carburetor, and wrapping all of the guns in Mexican horse blankets because J.D. took all the gun cases too.

We were a little late sputtering out of the harbor, but it really didn't matter much with a forecasted no wind, eighty-degree, bluebird day. It was much better suited for golf or gardening, but off we went, fueled with kid-like fantasy.

I don't care who or how old you are, firing up an airboat is like a ticket to a theme park. It's the Jungle Cruise but at warp skimming speed. Passing up the wakes made by large bank-grubbing redfish seemed strangely foreign, but we would be back for them soon, right after we found the killing field of a hunter's choice. Ducks were getting up in front of the boat as far as you could see, but the first hunt would be for an unclaimed spot of concealment.

"The only places in the creek with enough water to float the decoys are already taken, so we're going to have to do something else," barked Tricia through the earmuffs.

We opted for the bay proper, and it would be the only time where Pancho and Lefty in their new boat would be a welcome sight. Impatient drifters would be constantly firing up to repeat drifts, and we would let their disturbance keep the birds in the air for us.

"Wait," Tricia yapped again. "We can't use that one because the gherkin who built it put a chain on the door, and that one was foliated by the town whiney baby who will surely have to buy new diapers if we use it." "There", she pointed with a determined finger, "he's not hunting today so let's set up there."

It's somewhat humorous, but if a blind is built on public property, it becomes public property on a first-come, first-serve basis. However, turf wars abound and squatters like us just have to take our chances, like falling through the dilapidated plywood floor of this brushed up outhouse of a blind. It may be time to shore up our own palisades, but we'll leave the chains, and the diapers, at home.

No sooner than the decoys were thrown in a perfect haphazard pattern, the air thundered with ten-thousand ducks on a high-altitude bombing mission. One of the bombs detonated on the brim of my hat, a back-ended gesture of intestinal mockery. Legions of them conveniently set down a safe five hundred yards away, tipping their tails at us in a continued taunt.

With non-flying weather there's not much to do except wait on Lefty to stir things up. I looked out and saw some of the decoys moving. There were a few redfish stealing into the spread and they would spook when they ran into a weighted line, but it kept some of the plastic ducks bobbing like they were alive.

Boom! John fired, and everybody's hair stood sideways after hats were rudely removed by the concussion. Boom! He fired again, and whatever insects held refuge among the leaves began to fall dead. A duck did too, but not before a quite lengthy sail across a mucky expanse.

That dog won't hunt! Of course it didn't hunt because we didn't have one. Shell, Tricia's well-trained yellow lab, has unfortunately grown to the proportions of a small yellow truck, and we felt that eighty degree heat in an open bay might lend a stroke to the equation. Unfortunately, it still might lead to a stroke, but for us, chasing winged birds across a barren span of soul-sucking mud.

Me, being new and confused, if it looked like it quacked I shot it. It's easy to understand why the Game Wardens have such a good time out there. How in the hell can you possibly tell what kind of bird you are shooting out of a gray mass moving seventy miles per hour, especially when all you see is the flapping silhouette of their rear bumpers? Those last little rockets looked like teal, but all bumpers tend to look the same, especially when covered with feathers. In the meantime, there were still reds milling about in the decoys, and I began to question my motives above the silence of ringing eardrums.

"What's the new rule? What do you mean it's not in the book because it was printed before a decision was made?"

"What does Hunters Choice mean? Is it two apiece of those or just one? NO don't shoot yet." Boom! A widgeon and two palm leaves fell, and one of the hollow decoys began to list.

Tricia had to cell phone her mom for rule clarification, which took another hour of watching redfish tail in the decoys. We were done.

Time to go fishing. We left one of the party in the borrowed blind, convinced he could potlick a mountable trophy from the mid-morning sky. Not 75 yards into the run, large mud boils and wakes erupted everywhere in eight inches of water. Scared to death about getting busted for "rallying" birds, we passed on this easy herd of redfish. Surely there were Feds watching from satellites and listening from the brush for any nave or small print infraction. We found a fair distant mid-day flat absolutely covered up with more good reds, so we capped off the day listening to more explosions on topwaters, the ones we could still hear that is. A spattering of decent trout added more color to an already vivid day.

Back at the house, feathers flew and fillet knives glistened on the few fish we kept for dinner. Tricia was already back on the web and slicing Serrano peppers. It takes a passionate cook to convert what amounts to flying liver into something special, and that she did.

When the next split of duck season comes around everything will change. Gray wintry days will make shooting ducks a lot more productive while fishing on the back end will promise hope of bigger trout. With a bit of luck J.D. will be back with regulation civilian 12-gauges for us to hunt with.

Even with as much as fun as hunting ducks can be, it's going to be a toss up, though. I could get out there early in the cold and work real hard, stomping around in thigh-deep mud putting out decoys and brushing blinds; or I could sleep late and saunter out as the mid-morning sun begins warming things up and hunt for big trout instead.

"Say again John, I couldn't quite hear you."