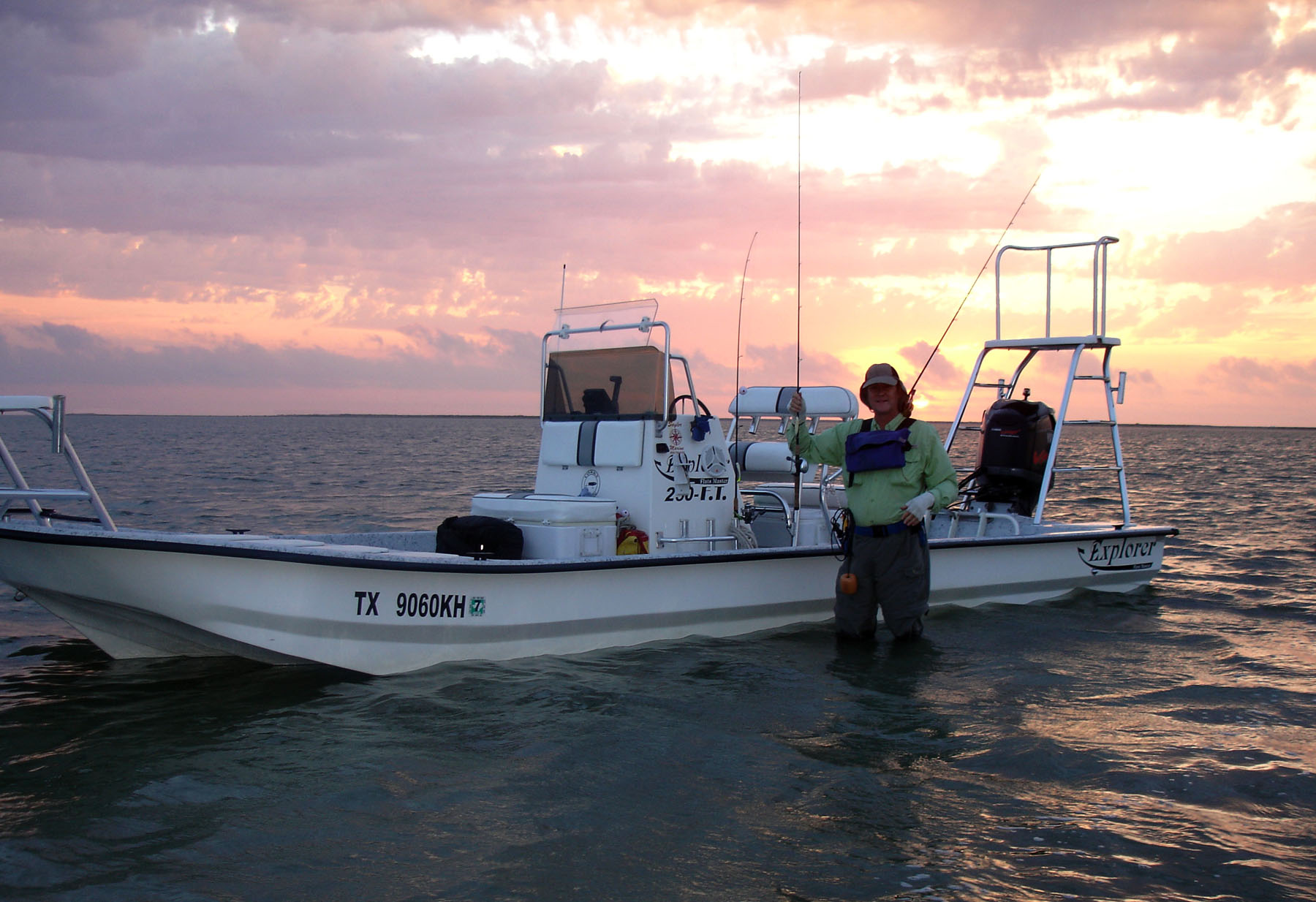 Another fine memory stowed for the rocking chair.
"Hey man, that front line is starting to look pretty bad I think it's on us."

I discounted my buddy's admonishment as old woman speak. Yes, the blackness was hanging low on the horizon, but the fish in front of us demanded more attention than any distant weather threat.

My plug went off again; sounding somewhat like an automobile striking a galvanized trash can. My partner, J.O., glared a hole in me like the competitive cigar-chomping grump that he was. He had kicked by butt on many occasions, and norther approaching or not, I was in a groove and it was my turn to put on the clinic. I fully intended to wreak every bit of payback I could.

J.O. and I go back to the mid-eighties. I first crossed him in the "MirrOlure Line-up" on a Corpus Christi Bay shoreline just north of the Indian Point pier. It was during the Thanksgiving holidays and back then hardnosed hopefuls would park in a neat row and line up in equally gentleman-like order to throw plugs at winter trout. Most everybody had good stringers that day, but there was one guy who continuously stayed bowed up on bigger fish while everybody else either watched, mumbled insults, or tried to get closer. I was one who tried to sneak closer. After a few unsuccessful attempts at small talk, J.O. finally spat in an almost accusing tone, "Well, do you have one of these or not?"

"One of these," was a chartreuse gold-side 51-MirrOlure. There were a host of colors hanging from the old foam "bwana" hat but not that one, and it was one of those times where color made the difference. We have-nots shook our heads as he dragged out ten of the best fish we saw that day. We would cross wading paths again in a few weeks, many miles to the north.

The next encounter was under absolutely miserable conditions. Anything exposed got gnawed raw by winter rain and northwest wind, tough on a body but perfect for a winter honey hole in Offatt's Bayou. We considered it a good enough trade as back then it wasn't unusual to pull ten good trout out of this little sanctum with ten good casts. It was for naught this time though, and peering through ski masks and eye-stinging drizzle we stood squarely and kept casting to see who would wimp out first. We were both protectively bristled as neither was supposed to know about this spotmuch less be there. I should have recognized that peculiar casting arc, but it wasn't till in the parking lot while trying to peel enough gear to fit through the truck door when it came to me in that same, almost accusing, tone - "Didn't I see you a couple of weeks ago?"

Heck, if this guy was going to show up on me like this we might as well hammer out some sort of treaty. We exchanged shivering phone numbers and ended up sharing many lure probing assaults along the entire coast. We eventually racked up plenty of stories, some of which may even go into a magazine one day (insert small grin).

Each session retained that undeclared battle for daily bragging rights. Win some, loose some, but the underlying combative tone was always there driving each of us to try harder. As written before, it's male ego in the arena, and there are many reasons why we fish besides the fish.

During one spring-time episode in the Upper Laguna, I, being the impatient young one, caught three fair trout on topwaters from the submerged wreckage of an ancient houseboat. Five minutes of blank casts moved me forward in search of another quick fix. J.O. slowly chewed on a cigar stub, stood flatfooted, and proceeded to coax a full stringer of pig-bellied trout off of the same structure with a weightless, weedless Bass Assassin. Of course he kept his rod down so as not to tip me off. He still gloats about it, but I learned to be more diligent when working small areas and also to look over my shoulder more often.

While working shell and pilings in Upper Galveston Bay, that same 51 MirrOlure would often pull strong head shaking dividends from sweet spots we had learned through trial and error. Although we always agreed on meeting times, it was funny how he would already be well in the water when I got there, and had already swept most of the sweet spots. In one particular area, we had to sneak through a subdivision. The acquired skill was stealing through the bushes without alerting the local, high-pitched, obnoxious little dock dog. If you did, you'd not hear your plug nor brain for the rest of the day or night. There were times I considered poisoning both J.O. and the dog, especially that foggy evening I arrived to the already protesting mutt and discovered J.O. had already stuck the best fish from each piling with a red shad Corky, leaving me, besides no sleep, with an ear ache and empty water.

That was near the old pier where the crazy lady lived. At times, usually late on a spooky night, she would run to the end of the boards butt-naked, bouncing, flailing and chanting. She called us "demons" and demanded that we "get thee behind me Satan!" We did temporarily get behind her, not only out of Exorcist-like head-spinning fear, but also so we could get a little better look. Possessed as she might have been, the stark white form in the dark mist could be quite inspiring, especially when the only other thing to look at chewed cigars.

Night wades behind San Luis Pass were also interesting, and when we got separated by oppressive darkness, it was never clear whether the distant crashes were shark frenzies or your buddy scrambling for the safety of a shin-skinny bar. The old Rebel "G-Finish" pearl Jumping Minnow ruled back there while they lasted. Unfortunately it got cheapened and changed, rendering it totally worthless; I have one left. Those productive years still incite giggles for both of us when we hear the newer philosophy of, "you have to throw black at night." Well - O.K.

Anyway, between bringing bananas on your boat and one-upping you with stories of tiger fish caught in Africa and corvina from Baja, J.O. did lay claim to the highly-coveted Lower Coast STAR trout one year. That's another chapter, but for now, let's go back to the opening story.

It was classic East Matagorda at its wintertime best. Standing on the edge of a well-known reef, thick fish came up to slam topwaters worked hard in a pre-norther frenzy. Not much had happened all day, but as usual, an entire trip can be made in one short hour. For whatever reason only one retrieve worked and I had found it. Hard-rocked Super Spooks spanked a full 180 degree's back and forth were getting attacked violently during long in-between pauses. Fat winter fish to twenty-six inches came steadily to hand until the wind swapped hard over, way ahead of that distantly innocent cloud line.

The old Mako swung to and started pounding hard against the anchor. Visibility went to hell in hurry and there we stood once again in cold driving rain. There were only a couple of cuts that would take us safely to the ICW, but a non-working compass and no GPS sent us due west into the blow with little more than hope that our direction was right. That little bay can get angry and it was certainly baring its white-watered teeth, not to mention dozens of small reefs waiting for us at the entrances. Long story short, by pure luck, we bisected a cut and bow-plunged home, freezing with no jackets, but with another fine memory stowed for the rocking chair.

The meaning of all of this? -- When our lives become history, when the grim reaper appears with scythe in one hand and our final stringer in the other, is it really going to be about the fish, or will it be more about who we shared them with?