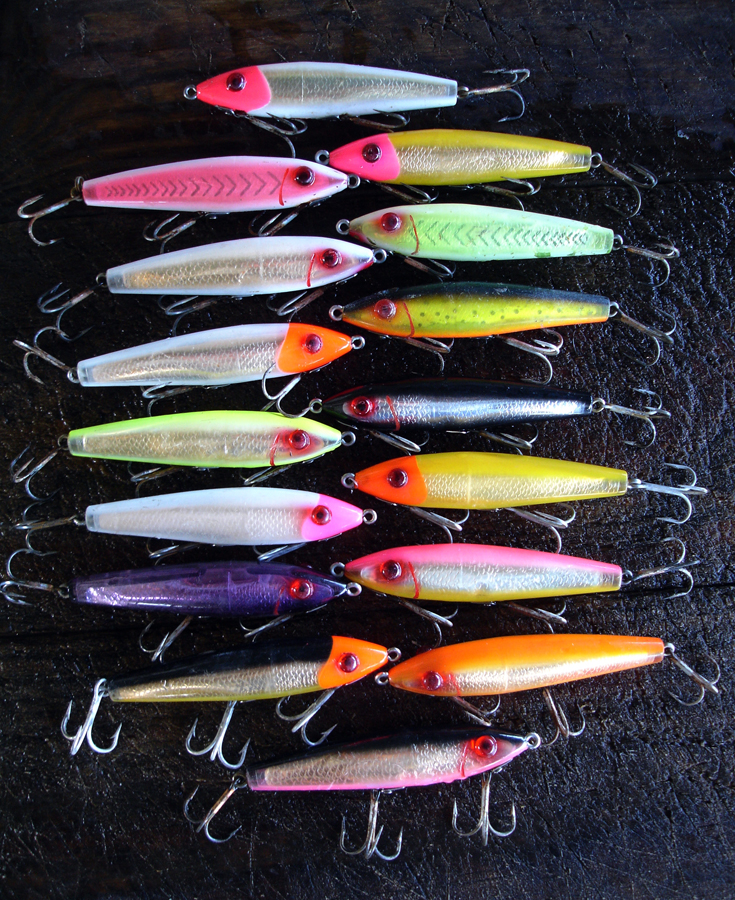 These are lures of legend.

It was three-thirty in the morning, and there like a Popsicle in the mud I stood, convinced that life would soon be disabled by loosing all ten fingers and perhaps even a few toes to frostbite. Even though I had just managed to paw yet another seven-pounder off of three sets of deeply engaged treble hooks, I remember asking myself one simple question: "Fool… What are you trying to do here?" I knew the simple answer and so did many others. I was plugging for big trout.  Whatever self imposed hardships came with it, well, it was fishing for the extreme reward and that's just the way it was. It was winter MirrOlure time, and we were only following the lead set by many weathered faces before us. Now, after a several year hiatus from throwing the original 51 series MirrOLure, I stumbled into the old stash and am proud to report that it's "Déjà vu all over again."  Hard baits and hard weather… it's time.

MirrOLures - I haven't thrown them in about four years, convinced they sank too quickly for Laguna work and had far too many barbs to negotiate thick grass. But, in a search for the passion that brought me, tying knots on them during the past two weeks has produced fish reminiscent of the old days. The old days of throwing hard plugs such as Bingos, and then later MirrOlures, was an important piece of history that helped shape trout fishing along the Texas Coast into what it is today.

Not insignificant was the character development of the groups of men who threw them. That's what men did in the winter for big trout. They stood, they cast, and they threw MirrOlures because it was the only lure to throw if you were serious about what you did. When you walked into a line-up of old salts back then there was a certain sense of mystical magic. Beyond that, there was certainly a strong sense of protocol that seems missing today. If you showed up with the wrong color, it suggested that you were not privy to up-to-date local knowledge and were simply cast off as another intrusive wannabe. If you had the wrong reel, which was anything but red, you were treated as such and not fully allowed to pull up parallel and reach the strike zone.

To me, there's little can compare with the magic of plugging in winter; that sudden stop of the lure and the delayed, heavy headshake from a serious trout who just realized the error. MirrOlures catch fish, big fish, and five decades worth of their stories are legendary. Instead of punishing ourselves with another boring "how-to" attempt, perhaps a small sample of a few typical stories might allow for some intuitive reading between the lines instead. For me, I was a relative late-comer to the 'the line-up', but the introduction which got me into all sorts of trouble later in life started around Corpus Christi Bay.

Thou shalt not tread here. "Of course you ain't catchin' nothing boy! Look at that outlaw lure you're using, and look at that reel, and how do you expect to reach the trough with them low-cut waders you're sportin'? You ain't near ready to come out here, so you just need to move on down there a ways 'til you are."  It was one of my first lessons in the pith helmet pecking order. On any given winter day with even marginal conditions, you could see lines of older men standing in well-placed and gentlemanly order, all throwing MirrOlures into a distant gut and waiting for schools of trout to swim by. Many stringers quickly approached the new limit of twenty and everybody tried to copy what the heaviest hitter along the line was doing, and there was always one. I wanted some of it, and quickly learned how deadly the red-topped TT28 could be, about long casts and low retrieves. Most importantly, I learned patience, respect, and the beginning of the new word- "grind."

Blue Hole - In Offatt's Bayou, near where Moody Gardens now stands, the line-up of serious men in waders was equally as intimidating and the catches impressive. The colder it was the better, and there is probably an entire museum of old plugs still down there stuck on that reef. Again, long casts, a count-down of about eight, and then slow clicking the shell on the bottom brought some of the heaviest fish I'd ever seen. If you didn't have the right color for the day you missed it all, and there were a certain few locals who were extremely adept at casting where you couldn't see what color they were using. Horrible rubber waders with ball and chain boots, shiny yellow slicker suit tops, and a bone-cutting East wind was what you wore. It was more of the deep and slow lesson, and the old red Ambassador with a five-to-one ratio helped. A few of the old men helped too, if you could call a chewing out being helped.

Galveston Bay Academy - There was no place where cliques of MirrOlure chunkers were more tightlipped than in Galveston Bay proper. Back then there were several but highly protected drive-up spots when the wind was light or out of the Northwest. If you parked in one of he local's spots you might as well have insulted their mother. It was in this bay where we learned to count the lure down as it fell about one foot per second. When you felt it ticking through suspended schools of mullet, you knew you were close to the strike zone. You moved and kept the plug at that level until you got bit, and that was probably on top of one of the many little shell tow-heads that others already knew through years of probing. We learned that when the bite was off, ripping it hard would draw strikes, even in extremely cold water. We learned to use the current to sweep the bait over structure or near old crashed out pilings. We learned not to walk anywhere near someone already bowed up, or your truck which you parked in the wrong place might be covered with fish guts when you returned. Many three to six pound fish went on ice in those years, courtesy of plugs, pluggers, and long hard wades.

Getting serious farther south. In the setting described at the beginning of this piece, the memory of which started this whole nostalgic visit, we were throwing MirrOlures deep into a February darkness. The anchor was fast where it had been for two days, another forty-eight hour session of high anticipation; throwing and waiting for a retrieve to be stopped cold by a beast of mythical proportions. We watched the entire process, from morning 'til morning, and even though the fish never moved, the retrieves and catch ratios ran the complete gamut several times throughout the period. That's when you learn to be a fisherman; you stand where fish are and learn to catch them through the swings of the day. That particular night I remember hearing the Grim Reaper circle me with a scythe made of ice. The occasional sound of a reel whirring in the distance lent a small measure of comfort. It suggested that my partner was still alive, so perhaps there was hope I could make it until the sun brought light, heat, and hopefully some sort of directional solace. However, we knew what we had and that any moment the suffering would be justified. It was, and although it doesn't happen very often these days, we each had over twenty trout per day exceeding seven pounds. A few were larger. It was plugging.

MirrOlure magic in Mansfield.  Yesterday we threw the lure we affectionately dubbed the "Pink Chicken" MirrOlure. It was the day after a serious norther, but the winds quickly died and the sun shone by mid-morning.  In a typical winter stack-up scene, trout pulled up to feed and lay vulnerable on pieces of structure. Here it was on nearly every small waist-deep grass patch for one-half of a mile. In the beginning they wanted it slow and just above the string, but later they moved up high in the column and wanted it ripped fairly hard. I counted about sixty landed on my rod and my co-conspirator had that many or more. We killed zero however, as we were just plugging for fun and not needing to keep a dead score. Nothing big this time, but we did have some nice twenty-fours and twenty-sixes.

It's February and the magic is again upon us. The illusion would not be complete for a Texas trout plugger without a little of the hard stuff; hard baits to go with hard weather.  Of course we'll still be using a lot of Corkies for serious work, they conveniently cross the gap between a hard and soft bait, but the MirrOLure just re-earned its way back into the box.  There are still legends left to be made, this lure will still be a part of it, and I am as excited again as the kid who tried to infiltrate that old salt lineup. This time I may do some of the chewing however. Are you ready? See ya there!