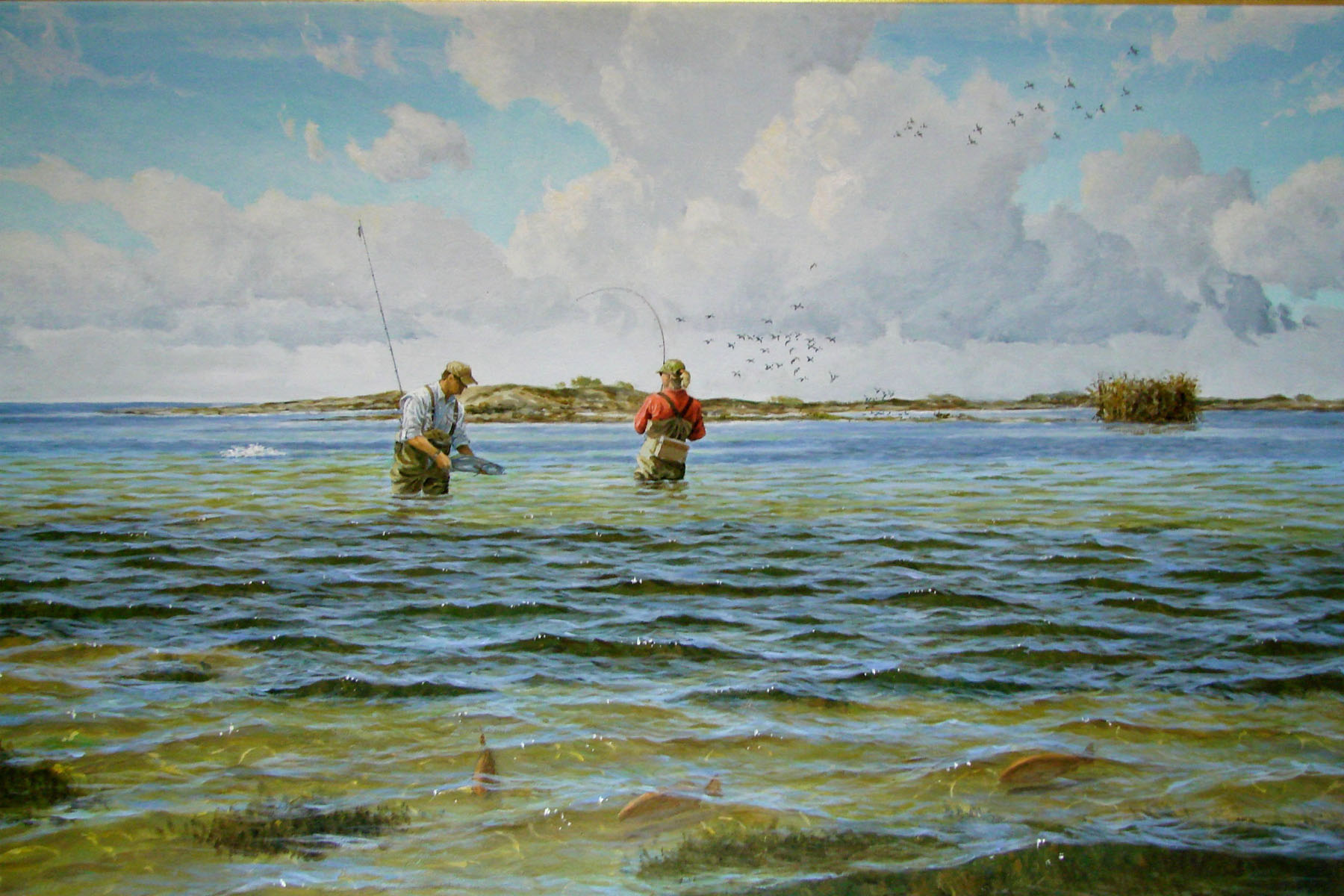 Nature is such a fickle adversary. She easily giveth and more easily taketh away, and even a truthful fisherman will seldom admit having a firm clue about the whys of it all. I'm starting to think fish were created to remind us how silly we really are, especially when trying to pit our big human brains against little fishy brainstems. Even though we were given dominion we'll never truly have the upper hand against nature, but there are still a few things we can do to increase our fishing odds, even if it means being a little "novel" at times. I got my waders handed to me a while back during one of those unexplainable no-feeding downtimes and have been scratching my receding hairline over it ever since. So I thought I'd share.

Two favored regulars blasted down for another great adventure but this time brought along an accomplished artist to capture some of the magic on canvas. Benny and Margaret have been doing some serious sporting all over the world but chose the Laguna as their backdrop for a wall-enhancing mutual wedding gift. They invited David Drinkard whose work has adorned several of our TPWD saltwater stamps along with many other great works. Good stuff. But unfortunately, despite the incredible fishing we have been enjoying, nothing was happening this sessionand I mean nothing! The weather was golf course excellent with zero wind, bluebird skies, and the water was "invitationally" clear. Sometimes the weather can just be too good, and for these two days it was. Despite seeing uncountable wakes (from both trout and reds) pushing in all directions over three-square miles of skinny flats, nobody could buy a bite no matter what we did. The bait was all down, suspended and lazy, and evidently the other fish were too.

Benny and Margaret are no slouches and I'd like to think I'm not either, but even while standing in the middle of good fish we couldn't draw so much as a sniff. Hey, I don't care who you are, it happens! David finally got frustrated and said, "That's it... I'm going back to my Palacios roots!"

I thought he was going to pull out some white boots, but he instead began assembling a rig of a topwater trailing a paddle tail on a sixteen inch leader. "Yeah right," I nearly said aloud. About three casts later we hear him laughing behind a bent rod. David soon began to put on a virtual clinic in conditions I wanted to call "uncatchable." Even so, we three spectators still refused to resort to that mid-coast begging stuff.

After we finally had enough of this freak show I convinced Margaret to submit to the rig just for "experimental purposes" of course. Next thing we knew she was laughing along with David. She soon did it again, and then again. Benny and I still refused. Embarrassingly enough though, by the end of the day we all tied on that stupid rig and we all caught fish. The second day was dj vu all over again; same conditions, fish everywhere, but no bite all day. Seriously, the only way we were able to catch them was by chunking that wacky rig. I felt like a tourist and hoped nobody had binoculars, but hey, it worked! Just to be safe, I made them disassemble and stow everything before we idled back through the harbor.

The bottom line is that it was actually refreshing to see someone do something different, especially when it worked. There's technically nothing new about what David did, except that few of us dare think outside the box anymore. (Lord help us if we even think about deviating from tackle shelf protocol.) About 50 years ago Rudy Grigar developed his famous Rudy's Bubble, which was basically a non-exciting topwater which you used to dangle a spoon or plastic tail, and it worked! You might think a Mauler-style float would have accomplished the same thing here but it didn't. Different action I suppose, but what worked for David was chugging it five or six times, letting it sit so the soft plastic dropped on it's tether, and then pulling a straight retrieve for five or six feet. I clearly remember him saying, "They're hitting it on the straight retrieve," and so we mimicked him with some surprising results. Who knows why it worked, but I do know I remember some similar scenarios where weirdness worked.

I clearly remember catching an old TroutMaster competitor (and my new tournament partner) in his garage with a strange and nearly hidden rig dangling from a cluttered shelf. It was a Mauler tied in front of a floating Corky. He wasn't going there with any explanation, but after a bunch of ribbing, he finally offered a smirky comment to the effect, "Yeah and we always catch the biggest fish in tournaments down there." Hmmm.

Another unconventional rig we snickered at was revealed about twenty-five years ago in the surf at Bolivar Pocket. An older gentleman was lobbing a Cordell Redfin below a popping cork of all things. "Yeah right," we thought again, and assumed one of two things. Either he didn't have a clue or knew exactly what he was doing. We settled that after about an hour when he pulled in a trout over seven pounds, which is really big for the surf.

All of this started me thinking about weird stuff I had done in the past, some worked and some didn't, but it was all fun trying. One time, during a desperate TroutMasters, I Carolina-rigged a Redfin in some cold and unproductive water. When you pulled it, the Broken Back would hit the muddy bottom with a "puff" and then wobble back up seductively. It actually worked, but unfortunately not on the big fish I needed. In the old Jumpin' Minnow days, we got the bright idea of tying a baby Jumpin' Minnow in front of a full-sized one, both in bone. When you got to jacking it around the action was incredible. I suppose it looked like one fish chasing another, but whatever, a lot of great fish came unglued on the trailer. I guess it just seemed too silly or too big a pain to rig and work so we soon lost interest.

The point is that it's fun to experiment and sometimes things we try actually work. The bigger point is that we can only try new things when "fishing" is our real goal, above the all-too-emphasized stuffed baggies at the end of the day.

To me, the whole game of fishing with lures is figuring out what will work for the given place in time. And so then, the actual landing of the fish you fooled becomes anti-climatic compared to that awesome jolt of a solid strike on what you presented. Regardless, we all know there are many times where nothing seems to work no matter who we think we are, how many fish we know we're on, or how many we caught yesterday. It is fun just playing around even if our efforts are "unconventional" and I think that may actually border closely on what the true definition of "fishing" is all about. I'm reminded of the Joker with his famous line, "Why so serious, huh?" Often times we let ourselves become too serious, and that's when we need to remember what this is all supposed to be about in the first place.

Seriously, none of us do this for food anymore, and it's more about pitting our brains against theirs. We shouldn't have to do too many of these silly things for the next few months though, as it will typically be as good as it ever gets, but when things slow downlet's don't be afraid to play with them like our predecessors did. Hope y'all enjoy the painting, and let's all try to get more enjoyment out of what we love. There will never be a shortage of baggies, but there will always be a shortage of fun time on the water. Let's be novel and do that.