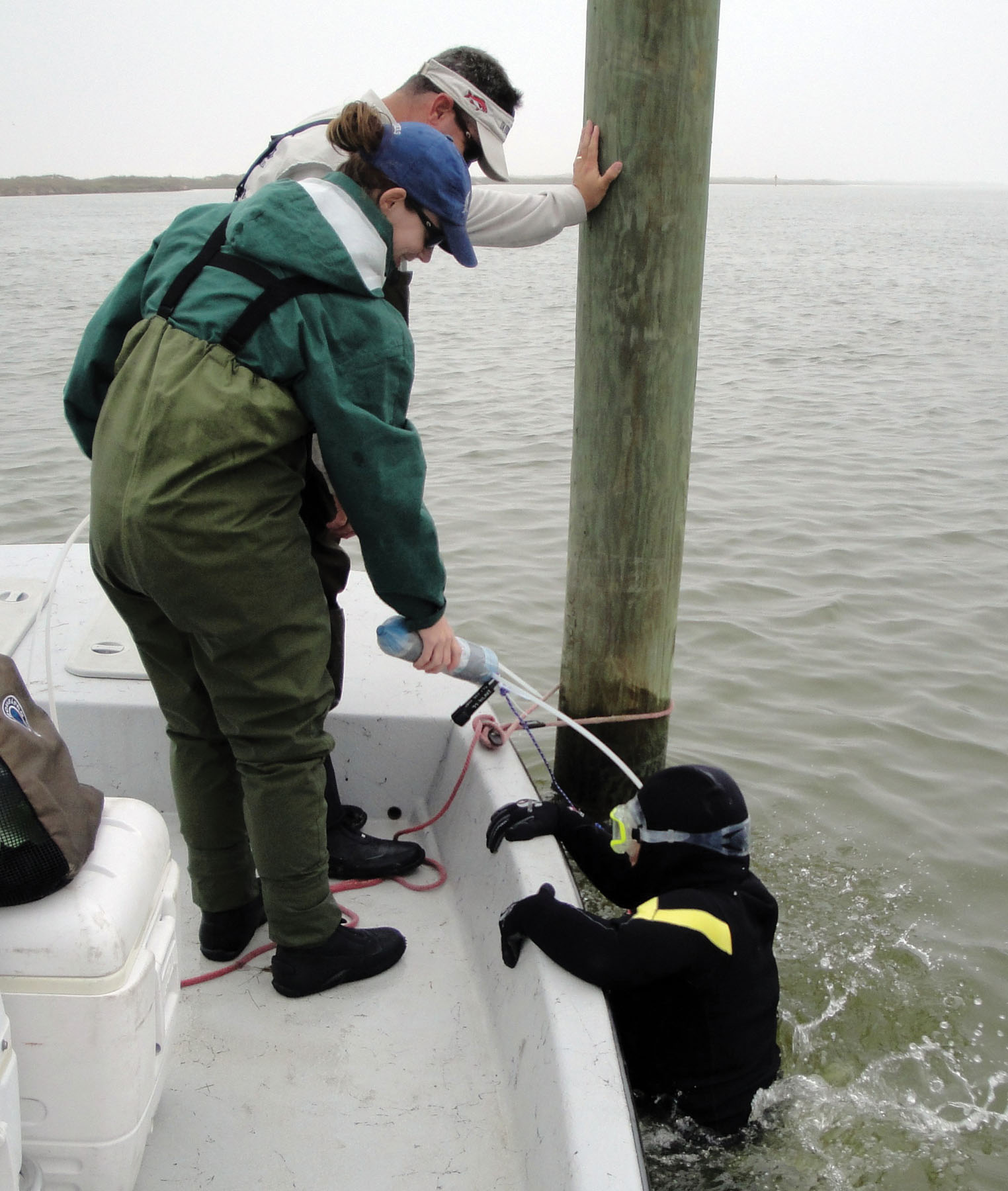 The water was about 52 degrees, but hey, it’s all for science.

We awoke this past Monday morning to an oppressive blanket of fog, dense enough to smother any hopes for launching early unless you had some of the same stuff between your ears. However, the mission, as it was, was not going to wait for an excuse as wimpy as only having a rock's throw of visibility. So, with strange gear but familiar enthusiasm aboard, Dr. Greg, Megan, Laura and I set out on an obscured heading with a taco in one hand a handheld GPS in the other. When it comes to fishing, I'm not sure which is more inspiring, the thrill of discovery or the glory of capture. Hopefully, this trip would include both. We called it, "plugging for science," and the end result has potential to yield an absolute revelation for all trout fishermen along the coast.

If there ever was a debated-to-death subject among trout fishermen, the tide runner theory would qualify. You know, when every spring, those hard-bodied fish push in through the surf to invade the bays with some serious line stripping attitude. It has always been a topic of speculation, not only about when and where, but also why.

Most old salts pride in their ability to tell a resident bay trout from one coming from the Gulf. The bodies of surf-run fish seem much stouter and we speculate this comes from surviving the demands of nearshore currents and evading toothy predators. Most fishermen have their own theories about timing, whether the movement is temperature or photo-period driven, but most all remain firm that these fish exist. All but the scientific community, that is. To date there has been no data aside from what is commonly termed anecdotal, meaning information coming strictly from fishermen that has not stood the scrutiny of scientific method.

Well, help is here. Dr. Greg Stunz and crew are literally wading into the possibilities of unraveling the mystery. Greg is an Endowed Professor at the Harte Research Institute and an Associate Professor of Marine Biology, TAMU Dept. of Life Sciences. Funding comes from both Harte and TAMU along with a sizeable contribution from CCA. Additional assistance comes from the Rotary Club of Corpus Christi, the Harvey Weil Sportsman Conservationist Award. The goal is to initiate a state-of-the-art tagging program to track movements of estuarine sport fishes, specifically to determine if separate stocks of spotted seatrout exist in the Gulf of Mexico and the upper and lower Laguna Madre.

Greg has some other heavy hitters in his boat, Megan Robillard, Fisheries Research Coordinator, and Laura Bivins, marine biology master's student. In fact, this project is actually led by Laura, who among other credits has completed some innovative studies on Florida snook. Also of interest is that both Greg and Megan can claim first rights as CCA scholarship recipients, and both have continued their paths to benefit all Texas anglers. That's your generous grassroots contributions returning at measurable worth. Laura is a different study and we'll get back to her later. But first, let's get back in the water with these scholastic fish heads.

As we idled out of the harbor on that ridiculously thick morning, we could hear other boats running in blind circles and other nervous sounds emerging through the white-out. Onward through the fog, and in about thirty minutes, we had safely cut our way into a little area where certainly no one else would dare venture.

Wrong! Human shapes suddenly appeared, then a ghost ship of sorts, and then out of the soup came a sarcastic voice, "It's OK Mikey, you can come on in."

It was, and in this situation could only have been, some of the old devil-may-care Troutmasters from winnings past; Dr. John Gill, Tansel Basci, and Dr. Jay Wright of eleven pound trout Florida fly-fishing fame. Go figure. I'm trying, but we should all be convinced that no spot or condition is safe any more.

Anyway, after exchanging some potlicker talk, my crew bailed into a little knee deep trough that we hoped would be holding some of the larger trout we needed. The transmitters being used are about as big as a fat thumb, so we needed some girth to accommodate this high dollar chunk of plastic. The area was full of juvenile trout, but Megan was the first one to hook up with a real fish. Another cool thing about this group is that they conduct all their studies the sporting way, i.e., wading with rod and reel and throwing topwaters and Corkys. Her fish went just over six pounds, a solid candidate for a good return. Greg soon stuck a four pounder on his obsessively thrown "secret" topwater. (He's going to throw it whether he should or not.) We caught a few more worthy of surgery, but for the most part the fishing was foggy as well. We didn't exactly have a trophy day, but none the less, the plan worked.

Laura did her surgery thing, making precise incisions to insert the transmitters and filling out the required paperwork. Never mind the smack talk about who caught what, and of course Megan only strutted a little with her personal best. After the releases it was time to head to the Mansfield Channel to install the receivers.

Enter Laura again. The water was about 52 degrees when she slipped into a wetsuit for the required dive. It's all for science, but we all heard her sputter something like, "I hate my life," through blue lips following the initial plunge. She wants to know what the big deal about Texas trout is anyway, being that she is more used to catching thirty pound snook. When the second device was set she sputtered something about deserving her master degree right now.

With the receivers in place, they now should "ping" movement of trout through the Land Cut, Mansfield Pass, and Upper Laguna Madre complete with time and date stamps and other valuable data. We should certainly know more than we do now, which will be valuable information to better manage precious stocks.

The next phase is going to be tagging winter trout in the surf, and somebody proposed the Dream Team to make it all happen, which may actually turn out to be more of a scream team. Billy Sandifer is the only animal I know who has routinely caught ten pound trout in the surf during winter, so along with Greg's crew, myself, Capt. Tricia, Jay Watkins, David Rowsey and perhaps even our editor, EJ, the plan is to combine efforts to stick the data needed for this excellent study. With Billy's guidance I imagine this crew will catch them if they are there. There might also be some interesting fodder for the next article from one of us. Trust me; there will be no smack talk there either.

In the meantime, please watch for trout wearing streamers that say, "Internal tag, please release." Seriously, if you catch one, please don't eat it. Just document the when and where and call the number on the tag. The information gained should be big and could shed light not only on tide-runners but the value of coastal passes as well. So say the scientists among us who can actually work topwaters pretty darn well. Let's all be excited to finally clear this tide runner fog.